In February of last year, Gap Inc., which operates Gap, Old Navy, Banana Republic and Athleta stores, announced that it would raise its minimum hourly rate of pay for all U.S. employees to $9 in June 2014 and $10 in June 2015. As a result, it won "praise from President Obama who is pushing to raise the nation's minimum wage by a similar amount." The company said that the move would affect 65,000 employees who were making less.

The linked CNN Money report quoted an apparently confident Lynn Albright, a vice president at Old Navy, as follows: "We're coming from place where we can afford to make this investment." Maybe the company could afford it then, but based on today's store closure announcement, that's not so much the case now:

Gap announced Monday it will close a quarter of its stores and cut 250 corporate jobs as it tries to chart the clothing brand back toward growth.

The company will close 175 stores across North America, not including outlets or factory stores, based on store performance. There will be additional store closures at European locations. About 140 stores will close this year. Gap will continue to operate about 500 Gap stores, plus 300 outlet stores.

Gap has been struggling to entice customers amid competition from fast fashion brands. Same-store sales fell 10% in the first quarter, compared with a 5% drop in the year-ago quarter.

... Gap declined to say how many employees will be affected by the store closures.

If each store has just 15 employees, the number of store employees who will lose their jobs this year is over 2,000. The actual number is probably quite a bit higher. While it's nice that the company said, according to the Associated Press, that "it will help displaced employees find positions at nearby locations," that won't affect the chainwide headcount reduction.

The three media reports I have seen so far (USA Today, Business Insider, and the AP; all could be revised throughout the day) have not mentioned the company's 2014 internal minimum-wage move, let alone that it just so happens that the rate is going to $10 an hour this month. Given how much the company bragged about its initiative in its year-end February 1, 2014 annual report issued in March 2014, this is an especially annoying oversight.

Gap Inc.'s store sales have been declining, and many store closures were probably inevitable. But perphaps there would be fewer of them if the company hadn't decided to pay apparently above-market wages.

When the company announced its decision, Gap CEO Glenn Murphy insisted that "To us, this is not a political issue." Murphy announced in October that he would step down from his position in February.

At the time of the company's minimum-wage announcement, President Obama issued a statement, which said in part: 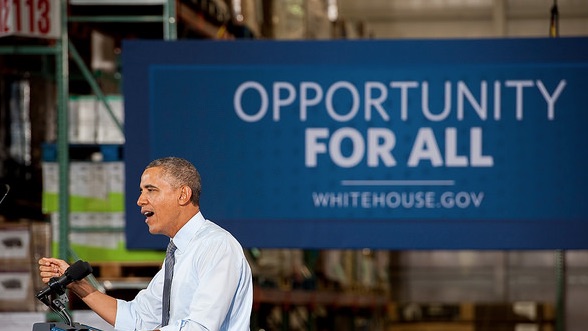 Today, I applaud Gap Inc. for announcing that they intend to raise wages for their employees beginning this year. But only action from Congress can make a difference nationwide.

I don't suppose we're going to see anyone in the press ask him or his hapless Press Secretary Josh Earnest what he or his administration thinks of today's announcement.

Excuse me for suggesting that companies around the country letting people go as a result of a steep rise in the minimum wage in the midst of continued tough business conditions, as the law of supply and demand would certainly predict, is not the kind of "difference nationwide" most people would welcome.