On Friday, the Washington Post's Jeff Guo hyped a study published in the American Journal of Public Health by four people with the Johns Hopkins Bloomberg School of Public Health. The study (abstract here) contends that "Connecticut’s handgun permit-to-purchase law (passed in 1994) was associated with a subsequent reduction in homicide rates" involving firearms.

Readers wondering if there is a connection to that Bloomberg, i.e., Michael, and his fierce anti-Second Amendment agenda need not wonder. There is. Two of the four authors are with the school's Center for Gun Policy and Research — very weak research which left the Post's Guo incomprehensively claiming that the state's "permit to purchase" law regulating private firearms transactions seems to have saved "a lot" of lives.

The obvious point, even though the authors contend that their findings are "consistent with prior research," is that correlation, or "association," doesn't equal causation. Sometimes that's all you have, but if that's the case, what you really have is "speculation." But the problems with this "study" appear to be far worse than that. 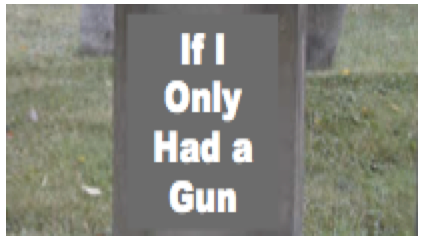 Hot Air's Jazz Shaw pointed to several of its shortcomings this morning. Arguably the most glaring one is the fact that gun deaths also sharply declined nationwide during the period involved. Additionally, one could just as easily attribute the Nutmeg State's reduction to serious antigang efforts in Hartford and likely elsewhere in the wake of the in-the-crossfire murder of 7 year-old Marcelina Delgado in March of 1994. Guo also linked to the 20-years-later lookback at Delgado's death at the Hartford Courant. Though it prominently cited those antigang efforts, Guo somehow managed to miss all of that. The item quoted Hartford's police chief two years after Marcelina's death as saying that "the level of violence is nowhere near where it was." Of course, Hartford isn't the whole state, but the effects of its efforts were hardly inconsequential.

The study's authors claim in their abstract that they tried to control for the comparative declines elsewhere by "using the synthetic control method" to create a "weighted combination of comparison states identified based on the ability of their prelaw homicide trends and covariates to predict prelaw homicide trends in Connecticut." Guo describes it as "a Frankensteinian creation that is mostly Rhode Island (1995 population: 1.02 million, less than one-third of Connecticut's — Ed.), with some Maryland, and traces of California, Nevada and New Hampshire" — which one can easily contend really means "highly contrived," with a highly contrived conclusion, expressed as follows in Guo's words:

What a load of navel-gazing rubbish.

Tell you what, guys. Let's look at a couple of non-synthetic comparisons.

First let's see how homicides and homicide rates involving firearms dropped in the Northeast region as a whole, using data provided by the U.S. Department of Justice's Bureau of Justice Statistics ("Firearm Violence, 1993-2011," published in May 2013):

Note that during the first five years after the Connecticut law passed, Northeast Region firearms homicides fell by almost half.

Why did the authors go out ten years measuring the supposed effects of a law whose impact should clearly have been felt within five? It would appear that they did this because the murder rates in most of the U.S. went up during the next five years, while Connecticut's leveled off. Why those five years of flatness have anything to do with the state's “permit-to-purchase” law is a mystery.

Finally, looking at Connecticut's nationwide standing in overall murder rate (again, including murders not involving firearms), we see that after a big first-year improvement, arguably due more to gang-related law enforcement efforts than to the new law, the state's standing hardly changed. As of 2013, Connecticut's murder rate was 36th in the nation.

Guo, who "has degrees in math and economics from MIT" with "a statistically improbable grade point average" — that is, he should know better than to buy into this garbage — wraps with the statist's classic argument:

Here is the classic tradeoff between liberty and safety. Private citizens are giving up the freedom to sell a gun to whomever they want. They are also giving up the convenience of buying a gun without a lot of waiting and paperwork. Are these annoyances worth it? That depends on how many lives you think are saved by keeping guns out of criminal hands.

It’s a number we can only guess at. So far, the best estimate seems to be: a lot.

Sorry, Jeff. If Connecticut's “permit-to-purchase” law has had any effect at all, it would appear to be very minor — and hardly worth the freedoms sacrificed. That's especially true in Connecticut, since the law's presence may have emboldened the legislature and Governor Dannel Malloy to go much further in 2013 by enacting a law requiring clearly unconstitutional gun registration. That law has made tens of thousands of Nutmeg State residents criminals in the state's eyes.