Even the leftist apparatchiks at the Politico seem to have a limit to their tolerance for the doublespeak the White House and President Obama routinely disseminate.

Reporters Edward-Isaac Dovere and Sarah Wheaton appear to hit that limit this afternoon after Obama's effort to pass Trade Adjustment Authorization (TAA) went down in flames by a shocking margin of 126-302. Since TAA had to pass for the vote on Trade Promotion Authority (TPA) to have any meaning, TPA's 219-211 "Yes" margin in a later vote was virtually meaningless. The pair used a headline whose lineage traces back to the Vietnam War era, and even asserted that Obama is "rapidly approaching lame duck status" (bolds are mine):

In defeat, President Obama declares victory
Democrats reject the president’s appeals, but White House decribes it as just a ‘snafu.’ 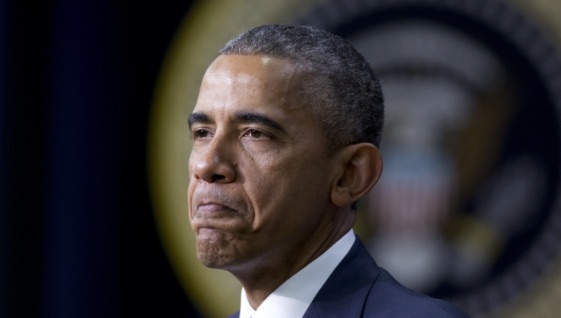 President Barack Obama responded to a stinging defeat dealt by his own party by declaring victory.

It is a common tactic in Washington to downplay bad news, but the White House brought it to a new level on Friday after House Democrats soundly defeated a package of free trade legislation that the president had personally implored them to pass. The White House chose to highlight the fact that one part of the package passed, even though two approvals were necessary to give Obama the trade authority he needs to negotiate the 12-nation Pacific trade deal.

“It’s déjà vu all over again,” a chipper White House Press Secretary Josh Earnest said Friday, praising what he called “bipartisan support” for the legislation. The 126-302 defeat of a key trade measure was just a glitch: “To the surprise of very few, another procedural snafu has emerged. These kinds of entanglements are endemic to the House of Representatives."

But the truth was more complex, and more troubling for the president. The GOP-led House had structured the trade vote as a tandem: both parts needed to pass, or neither would advance. That meant that by defeating the first one, the approval of the second was mostly symbolic — and that there was no clear way to move toward new votes on the bill.

Which is why the president’s assertion of victory seemed implausible at best.

Dovere and Wheaton could have called the victory claim a load of rubbish, but the fact that they went as far as they did is remarkable for a web site which has been such an Obama and leftist lapdog for so long.

They went further, uttering a term which was being used against George W. Bush well over a year earlier (at the 64-month mark) in his two-term presidency:

... The vote that scuttled the legislation — at least for now — was reauthorizing a program to help workers who lose their jobs because of trade deal get retraining and other assistance. The $450 million program, known as Trade Adjustment Assistance or TAA, had long been supported by Democrats and their allies in organized labor. But this time, they decided to sacrifice it for the larger aim of scuttling the trade deal.

In his statement, Obama accused members who voted against TAA of harming middle-class workers.

... when it came to the Democratic caucus as a whole, Obama’s appeal for support proved not to be compelling. He has earned a reputation for keeping his distance from Congress, for being reluctant to engage with lawmakers and the procedural shenanigans that determine the outcome of so much legislation.

And then there’s the fact that he’s rapidly approaching lame-duck status.

Maybe it's as simple as this: Politico's reporters are getting tired of and bored with "44," the number they used to put at the top of seemingly every item a reporter filed about Obama for several years after his first presidential election victory. Perhaps they're to the point where they don't even care if the heavyhanded White House cuts off their precious "access," because very little that is truly newsworthy will be coming from there during the next 19 months. They're looking for something more important, which would appear to be helping Hillary Clinton become "45" at all costs.

This theory would certainly explain why a Politico hack would post a self-embarrassing story about Mrs. Clinton reading a Bible verse at a wedding (HT Twitchy), while running a column in its magazine by an intimidated Republican claiming that it's a terrible idea to even expose, let alone go after, the Clintons' scandals and drop-dead obvious conflicts of interest because, after all, history shows that doing so just makes them stronger.