One doesn't know what to do with the rubbish which follows beyond noting it and hoping that the ridicule which results will somehow and in some way have some kind of impact.

Despite 6-1/2 years of horrid governance and dozens of acknowledged scandals, several of which a few of the credible remaining outposts of liberal thought have actually agreed are scandals, David Brooks, the New York Times's resident fake conservative, asserted on Friday's PBS NewsHour, as if it's an indisputable fact, that "President Obama has run an amazingly scandal-free administration, not only he himself, but the people around him."

Here's the transcript of the Real Clear Politics snip, which transitions from fellow panel member Mark Shields's discussions of charages against Dennis Hastert (which, as egregious as they might be, appear not to have anything directly to do with his duties when he was a congressman or Speaker of the House:

DAVID BROOKS: First, if the allegations about the contact with the boys are true, well, we have seen that with the Catholic Church. We have seen a disturbing undercurrent in American life, I guess, and maybe in world life, of this sort of thing. 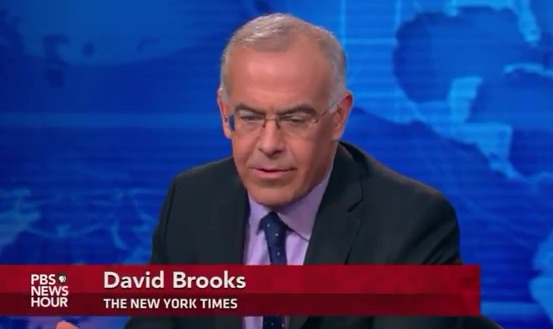 I am struck, as Mark just mentioned, the whole litany of people, especially of that era, who were involved in some scandal or another. Some of it was sexual. Some of it was more financial, even Tom DeLay’s, Speaker Wright. And it was just all concentrated in a lot of people all at once.

Does politics attract such people? I don’t know. Is it prevalent in society? It’s certainly a reminder of original sin. The other thing, though, I did want to say that there are people in American life to whom this has not happened.

And so there are people in Washington who do set a standard of integrity, who do seem to attract people of quality. And I think that’s probably true of the current group. I hope it’s true of the current leadership group in Congress. But — so they’re not all involved in scandal.

MARK SHIELDS: David makes a good point. And I agree with him on this administration in particular.

David Brooks should know, and probably does, but he apparently doesn't care that Tom Delay "was formally acquitted" of "criminal charges of conspiracy to violate election law" in September 2013. That acquittal was affirmed in October 2014. All you need for a "scandal" in LeftyLand if a Republican or conservative is involved is an indictment (if that); apparently, no amount of acquittal or exoneration will ever cause the press to remove the "scandal" tag. Meanwhile, you can have literally smoking guns (e.g., the Obama administration's Fast & Furious scandal), and the press will never go beyond calling it a "controversy" — if that.

Shields and Brooks perfectly exemplify the utter contempt for the truth we have seen during the past seven-plus years going back to Barack Obama's first presidential campaign. It has been and continues to be nothing short of astonishing, even for those of us who expected the worst.

For those who want a healthy dose of reality to offset the utter fantasies contained in the transcript above, Dan From Squirrel Hill's list of 1,080 "well sourced examples of Obama’s lying, lawbreaking, corruption, cronyism, hypocrisy, waste, etc." — dozens of which objectively fit the definition of a scandal ("a disgraceful or discreditable action") – is here.