On Friday, Jessica Gresko at the Associated Press reported on the Washington Metropolitan Area Transit Authority board of directors' Thursday vote to "suspend issue-oriented advertisements until the end of the year." Though they wouldn't admit it, the board's move was obviously a reaction to Pamela Geller's request to post an ad from her American Freedom Defense Initiative (AFDI) which included a cartoon depiction of Muhammad. Gresko actually used the T-word — terrorists — to describe the two men who were killed when they attempted to attack Geller's Muhammad Art Exhibit & Contest in Garland, Texas on May 3. But she ruined with her preceding modifier: "would-be."

While it's an improvement over the repeated use of "militants" and "gunmen" to describe people who are in fact terrorists, it's still far from sufficient, and still horribly inaccurate.

Here are the first three paragraphs of Gresko's report, wherein we learn that it is apparently a de facto AP Stylebook rule that you can't use the name of Muhammad in your writeup's content without also calling him a "Prophet" — as if that status is beyond dispute (bolds are mine): 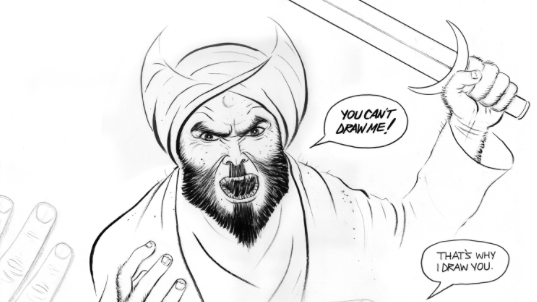 Transit officials in Washington have voted to temporarily suspend all issue-oriented advertisements on the region's rail and bus system, a move that comes as the agency was asked to consider an ad with a provocative cartoon of the Prophet Muhammad.

The Washington Metropolitan Area Transit Authority's board of directors voted Thursday to suspend issue-oriented advertisements until the end of the year while it studies its policy. The agency, which oversees the bus and rail system in the nation's capital as well as nearby areas of Maryland and Virginia, did not say the move was being made in response to any particular ad.

The dictionary tells us that you don't have to successfully commit a terrorist act to be considered a genuine terrorist:

1. a person, usually a member of a group, who uses or advocates terrorism; 2. a person who terrorizes or frightens others.

There is no doubt that the two men killed were terror advocates. One of the two fairly screamed it from his social media accounts.

Gresko's "would-be" modifier ("desiring or aspiring to be a specified type of person") was completely unnecessary, and deliberately distracting from the truth. Elton Simpson and Nadir Hamid Soofi were terrorists through and through.

Certainly a large plurality and perhaps a majority of the world's citizens believe that he wasn't, for the following reason:

Since we have no evidence that Muhammad received any of his revelations from God, we can only conclude that Muhammad was a false prophet, and that anyone who wants to follow the truth will have to look somewhere other than Islam.

AP apparently feels that it can unilaterally order the world to believe that Muhammad was a "Prophet," and too bad, so sad for anyone who doesn't like it. The wire service also engaged in this exercise in a May 7 report, and has surely done so on many other occasions.

As seen above, AP even changed the name of Geller's Garland, Texas cartoon contest to force its belief about Muhammad's status as a "Prophet" that it wishes to impose on the rest of the world into an event which didn't have "prophet" in its name. A visit to Geller's home page still has her ad for the event. It was the "MUHAMMAD ART EXHIBIT & CONTEST."

In other words, Jessica Gresko deliberately misnamed the Geller/AFDI contest, making it appear as if Geller agrees that Muhammad was a "Prophet."

I wonder what the formal or informal AP Stylebook rules are about using the descriptor "Lord and Savior" before every mention of Jesus Christ?

Actually, no I don't.