Hostess's Revival: What Can Happen When You're Allowed to Start Fresh

Given how much wailing and gnashing of teeth there was in the press when the old Hostess liquidated in 2012, a mid-April story at Forbes has gotten surprising little attention. Well, maybe it's not that much of a surprise, for reasons which will be indentified here.

Readers may recall that the final straw in that drama occurred late that year when the the AFL-CIO-affiliated Bakery, Confectionery, Tobacco Workers union called a strike after rejecting management clearly communicated final offer. The company, already in bankruptcy, was through negotiating, and chose to liquidate. The press moaned about how all of this meant the end of an era. Steven Bertoni's Forbes writeup shows how wrong they were, and what a business can accomplish when it's not saddled with legacy costs and constraints.

Because it received no national press coverage despite affecting workers in 48 states, very few people know that the Department of Labor decided after Hostess's implosion that the company's 18,000 affected workers would be eligible for Trade Adjustment Assistance.

That's supposed to happen when workers lose their jobs because of imports, not because they walked away from their jobs and took their employer down with them. At the time, I estimated the taxpayer costs involved at about $800 million. A February 2012 Investor's Business Daily editorial accurately described the government's decision as "a reward for those who refuse to negotiate, and a sop to the manipulative unions that are most adept at gaming the system. ... It's corruption."

Twinkie's Miracle Comeback: The Untold, Inside Story of a $2 Billion Feast 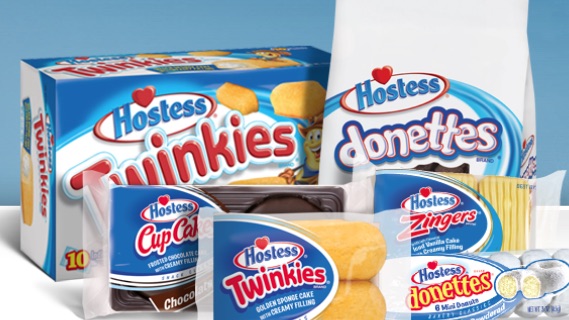 ... The new factory (in Lenexa, Kansas) is bright and clean. Tight rows of Twinkies march along the $20 million Auto Bake system with the precision of Soviet soldiers in a May Day parade. Yellow robotic arms, which look like they should be welding Teslas rather than boxing Twinkies, stack snacks with hypnotic rhythm. This 500-person plant produces more than 1 million Twinkies a day, 400 million a year. That’s 80% of Hostess’ total output–output that under the old regime required 14 plants and 9,000 employees. And it’s about to get more efficient: Metropoulos and Jhawar just installed a second Auto–Bake system, this one for Cup Cakes ...

In truth, it’s more a resurrection of an American icon ... Hostess’ closing was a cultural moment across the U.S., offering proof of the dire state of American manufacturing. After over a decade of failing health that saw two bankruptcies and five different CEOs, Hostess finally died on Nov. 16, 2012 after the baker’s union pulled the plug with an ill-conceived nationwide strike. Hostess’ roots went back more than 150 years. It left behind 36 factories, 5,600 delivery routes and 19,000 jobs, creating something of a national mourning, not just for the brands but also for what the demise seemed to say about the country itself.

... How they’d do it? Cherry–picking top assets, modernizing manufacturing and distribution, doubling the shelf life of products and capitalizing on the rare place in pop culture Hostess products still held. “People walk up and thank me for bringing back Twinkies,” says ("Junk Food Billionaire" Dean) Metropoulos, who has previously rebuilt brands like Bumble Bee Tuna, Chef Boyardee and Pabst Blue Ribbon. “No one ever thanked me for saving Vlasic pickles.”

... (In 2012) With the unions myopically unwilling to make concessions necessary to make Hostess viable, the debt–holders shuttered it, engendering those “end of an era” editorials nationwide.

... the liquidation had washed away everything. Yes, the company was gone, but so were the pension costs, the union contracts and the debt. It also unbundled the brands, allowing investors to carve out the best businesses. “

Metropoulos and Jhawar targeted the cake business: It had the best recognized brands (Ding Dongs, Ho-Hos and Zingers, in addition to Twinkies and CupCakes) and the longest shelf life.

... Metropoulos spent millions on R&D, working with food lab Corbion to tweak the formula of starches, oils and gums in Twinkies, finally arriving at an acidity level that would prevent staleness and discoloration. The singular goal: Make the Twinkie warehouse-friendly. And while none of this will make Alice Waters’ heart flutter, the team succeeded in making the indestructible snack even more so–it’s (sic) shelf life was more than doubled, to 65 days. Hostess switched to a warehouse system. Delivery costs dropped to 16% from 36% of revenue, and Hostess’ retail reach expanded greatly.

... In July of 2013–less than four months after Metropoulos and Apollo took over operations–the Twinkie was back.

... Fans flocked to stores. Demand was so high that large retailers waived the slotting fees they usually charge brands for shelf space. The Metropoulos and Apollo business plan had predicted $100 million worth of Ebitda (Earnings Before Interest, Taxes, Depreciation and Amortization — Ed.) for 2014–instead they hit $178 million. Those numbers make Hostess’ $410 million price tag look dirt cheap ... “What they’ve done at Hostess should be a Harvard Business School case study on how to turn around a business,” says (Joseph) Gatto, the Perella (Weinberg) banker.

It also should be a far more visible story in the nation's press. But it isn't. Why is that?

Perhaps because the new Hostess's runaway success demonstrates what could have been accomplished if two other companies in a heavily unionized industry had been allowed to go through legitimate bankruptcies in 2009.

Instead, General Motors and Chrysler went through sham "bankruptcies" where the government deliberately picked winners and screwed the losers, blatantly violating centuries of common law and contract law in the process. It was then when columnist Michael Barone coined the simultaneously appropriate and prescient term "Gangster Government."

How much more efficient, productive, and value-adding could the entire auto industry be right now if managers as smart in their line of work as Dean Metropoulos is in his had been allowed to pick up the pieces of GM and Chrysler and assemble new car business dynamos like the new Hostess, and if other competitors had then been forced to adapt to the new reality?

Sadly, we'll never know — and all except those who were favored are poorer for it.