The headline at Sandhya Somashekhar's Washington Post report on Pamela Geller, whose Muhammad Art Exhibit and Cartoon Contest was the target of a failed terrorist attack, acts as if that attack is her fault: "Event organizer offers no apology after thwarted attack in Texas."

Somashekhar's work reeks of contempt for Geller and her efforts, even going beyond the media malfeasance cited in the Brent Bozell-Tim Graham column posted at NewsBusters Tuesday evening.

Bozell and Graham cited several examples of how "Liberal journalists deplored AFDI's (American Freedom Defense Initiative's) exercise of free speech and blamed the targeted victims for the attack." Somashekhar went after Geller personally, and doesn't understand why she isn't filled with remorse over what happened (bolds are mine throughout this post):

Event organizer offers no apology after thwarted attack in Texas

Pamela Geller, the woman behind the Texas cartoon contest attacked by two gunmen late Sunday, knew what she was doing when she staged the controversial event featuring irreverent depictions of the prophet Muhammad in Garland, Tex.

The Dallas suburb had hosted a pro-Muslim conference in January, about the time Islamist terrorists killed a dozen journalists with the satirical French publication Charlie Hebdo. Geller, a blogger and fierce critic of what she calls the “Islamization” of America, wanted to make a statement.

... So she sponsored the Jihad Watch Muhammad Art Exhibit and Cartoon Contest in the same exhibition hall as the earlier conference. She and her associates invited 200 people and hired 40 heavily armed off-duty police officers and security guards to protect them.

And then they unveiled the pictures: A drawing of Muhammad on a unicycle. A picture of the prophet with a beard of snakes. An angry Muhammad wearing a turban, holding a sword and yelling: “You can’t draw me!” — a reference to the fact that depicting the prophet is considered blasphemous by many Muslims.

If the contest was intended as bait, it worked.

There's more, but at this point I simply must note Geller's response at her must-read response post at her blog to the paper's headline and Somashekhar's opening: 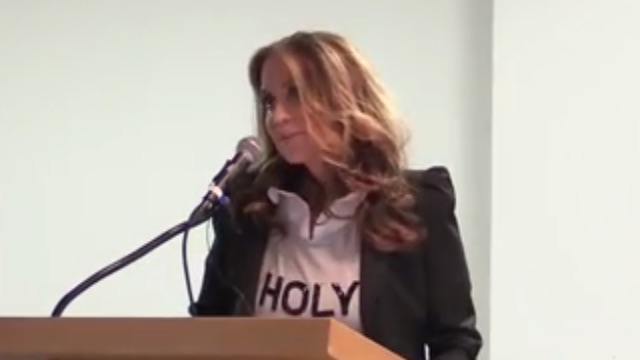 It is unimaginable. The descent of the mainstream media into out-and-out pro-jihad agitation is complete. Two Islamic jihadists attempt to murder hundreds of people at our free speech event in Texas, and the Washington Post says that I “offer no apology.”

I offer no apology? What apology exactly do I owe for almost being murdered?

...  Yes, I knew what I was doing. I was standing for the freedom of speech in the teeth of violent intimidation. What the WaPo thinks I was doing, that’s another question.

The collective has submitted, caved to the demands of Islamic savages. And as egregious as that is,  it is not enough. They attack, punish, and libel patriotic Americans who refuse to submit and grovel to the destroyers. They are cowards, and attempt to destroy brave individuals who refuse to be sniveling cowards, as they are.

Somashekhar's work descended into personal attacks from there:

In tweets immediately after the shooting, Geller appeared almost gleeful that she had been right.

As one of the nation’s fiercest online critics of Islam, Geller, a housewife from Long Island, has long embraced her role as a provocateur. Her inflammatory rhetoric has landed her organizations, the American Freedom Defense Initiative and Stop Islamization of America, on a list of “hate groups” maintained by the Southern Poverty Law Center.

There has been no sign of "glee" over this from Geller, who is one of the nation's fiercest critics of jihad. As she wrote at her blog: "The 'almost' protects these snakes from outright libel."

And "housewife" — the go-to chauvinist insult designed to characterize a woman as a lightweight? Sandhya, Pamela Geller isn't even married.

"Has long embraced her role"? No, ma'am. She has embraced this country's founding principles in a bear hug and is defending them at considerable personal sacrifice. Who "embraces" the necessity for round-the-clock security?

Regarding SPLC, Bozell and Graham noted the following Tuesday evening, and it can't repeated too often:

(SPLC is the) group that has also labeled the Family Research Center a "hate" group for supporting traditional marriage, leading to an assassin using their "hate map" to go to FRC's building and open fire, seriously wounding a security guard, with the intent to kill as many staff as possible, before being subdued.

I guess the Post and SPLC still expect FRC's Tony Perkins to apologize to America for his support of traditional marriage. That'll happen when cows fly.

Instead of expecting people to apologize for exercising their free speech, the press should be questioning how ISIS was almost able to pull off what was "the first time the terror group called an American attack one of its own," and why this nation's vulnerability to such attacks is from all appearances greater than at any time since the 9/11 attacks 14 years ago.

Thanks partially to the press's insistence on blaming the victim or target while failing to censure those who wish to intimidate and kill, Pamela Geller can now add another reason, by the press's twisted "standards," why she must apologize.

You see, it has to be her fault that ISIS has specifically said that they are out to kill her: "Our aim was the khanzeer Pamela Geller and to show her that we don't care what land she hides in or what sky shields her; we will send all our Lions to achieve her slaughter."