USA Today Columnist Goes Where GMA Would Not: With Air 62 Pct. Cleaner, Look at Obama Himself As Possible Cause For Malia's Asthma

A Wednesday "Good Morning America" piece gave President Barack Obama an open mic to claim that, in ABC's words, "climate change became a personal issue for him when his older daughter Malia, now 16, was rushed to the emergency room with an asthma attack when she was just a toddler."

Somehow, ABC managed to avoid another possible contributor — besides the obvious possibility that Malia developed asthma independent of external influences — namely the President's 30-year smoking habit. He is said to have quit once and for all in 2011. USA Today columnist James S. Robbins wasn't impressed with the President's "reasoning," and with good cause, as he articulated in a Thursday evening column. He even managed to get a "there's been no warming for a long time" observation past USA Today's editors (links are in original; bolds are mine): 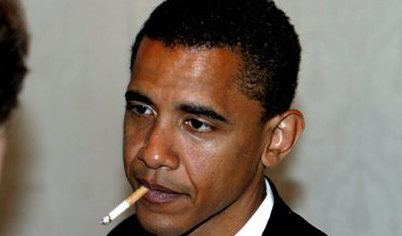 President Obama blames global warming for his daughter's asthma. Today that's politically useful spin, but the science says something different. If you're looking for a culprit, it just might be Malia's dad.

... The president connected his daughter's malady to global climate change. In a discussion Tuesday, he said "all of our families are going to be vulnerable" to global warming-induced health risks because "you can't cordon yourself off from air or from climate."

A White House fact sheet connected the dots, saying that asthma rates have more than doubled in the past 30 years, and that "climate change is putting these individuals and many other vulnerable populations at greater risk of landing in the hospital" like Malia.

The good news is that there is less reason for alarm than the White House suggests. The Environmental Protection Agency cautions that "outdoor air pollution and pollen may also worsen chronic respiratory diseases, such as asthma." Yet the EPA also reports that our air quality has substantially improved; aggregate emissions of common pollutants have decreased 62% between 1980 and 2013. It is unlikely that cleaner air is causing the increase in asthma.

Whether there is a link between asthma and global warming, Malia herself hasn't really experienced much. The high school junior was born in 1998, when temperatures spiked. By some measurements, the world hasn't warmed significantly since then.

According to the Centers for Disease Control and Prevention, "tobacco smoke is one of the most common asthma triggers," and "if you have asthma, it's important that you avoid exposure to secondhand smoke."

No father wants to feel that his habits might hurt his children. But sometimes you have to look in the mirror to find the guilty party, not search the stratosphere for a hidden culprit.

All of that said, we still don't have an answer as to whether Sasha, Obama's other daughter, has ever had asthma. If she hasn't, then maybe neither of the external influences cited are as important as unfortunate genetic or even random luck.