Something hasn't seemed right about the Memories Pizza story from the get-go. Now I know why.

In a Tuesday report, TV Station ABC 57 cited the Walkerton, Indiana business's Crystal O'Connor as saying that, in the station's words, they "don't agree with gay marriages and wouldn't cater them if asked to." In other words, they've never been asked to. The non-story which ignited a national firestorm is the result of a dangerously irresponsible ambush. The reporter involved admitted as much in a tweet late this morning:

In a separate tweet, Marino indicated that "I don't think anyone was really aware the attention this would get at the time of the interview. They just spoke their mind."

What we have here is — as we called in journalism school jargon — “no story.” Nothing happened. Nothing was about to happen.

If I were forced to mark out a story line, it would be this: A nice lady in a small town tries to be helpful and polite to a lovely young reporter from “the big city.” 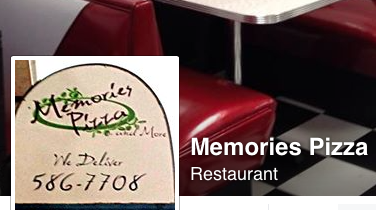 In other words, Memories Pizza didn’t blast out a news release. They didn’t contact the media, nor make a stink on Twitter or Facebook. They didn’t even post a sign in the window rejecting gay-wedding catering jobs. They merely answered questions from a novice reporter who strolled into their restaurant one day – who was sent on a mission by an irresponsible news organization.

Next: (South Bend) ABC-57 anchor Brian Dorman leads the evening newscast dramatically with this: "Only on ABC-57 News tonight. We went into small towns looking for reaction to the Religious Freedom Act. We found one business, just 20 miles away from a welcoming South Bend…with a very different view."

... Notice that his city of South Bend is “welcoming,” but that small-town business is not. It’s very different. That’s why ABC-57 “went into small towns,” as if embarking on a safari to aboriginal lands.

Not only did ABC-57 News create that story ex nihilo (out of nothing), but the next day, the station’s Rosie Woods reported on the social-media backlash against the Christian pizza shop owners.

“Our Facebook page has been blowing up with comments after we aired that story last night,” said Woods.

... You see, not only did ABC-57 manufacture the story with an ambush interview, it then doubled-down by making the reaction to the story into another story to give the sense of momentum, as if it were growing at its own impetus. Yet, everything about it is a fabrication.

Thanks to ABC 57's hackery ("Gosh, we need to find somebody who says they won't serve a gay wedding by 6"), multiplied by the Huffington Post and so many others, Memories' owners, as of a 9:33 p.m. report at WNDU, may be out of business:

"I don't know if we will re-open," she said when asked about the backlash the business has received. She also said her family is considering leaving town. "We're in hiding, basically."

"We're very hurt and confused," she added. "We stood up for what we believe. We said we would serve anyone who walked in the door -- even gays -- but we would not condone a wedding, we would not cater for it."

In the good old days, i.e., a few months ago, people with firm religious convictions weren't harassed into abandoning their businesses until they actually refused to commit what they considered to be a sinful, same sex marriage-supportive act.

But now the Thought Police and their media firestorm creators can bring a business to the brink of a shutdown when its owner simply expresses an opinion about something that has never happened, and might never happen.

Oh, and here's another side-effect of the thoughtless Thought Police:

Yes, Virginia, that's a real threat, and explains why the O'Connors are "in hiding, basically." The person who posted the tweet has been relieved of her duties at an Indiana high school, and police are considering charges. How many others not stupid enough to tweet their intentions are out there?