Maybe the left needs to rethink their oft-present and deep-seated hatred of all things associated with Comcast, other cable companies, and the satellite TV providers. It turns out that those "evil" entities have done quite a bit to cushion left-leaning CNN and MSNBC from what would otherwise be a harsh financial reality.

The Associated Press's David Bauder, in an item which somehow was deemed to be deserving of "Big Story" status, essentially acknowledged that in his Sunday afternoon review of the cratering and chaotic situation at MSNBC when he gave an overview of how the cable news channels' revenues shake out.

As he returns to run the NBC News Group, Andy Lack faces one of the same puzzles he tried to solve a decade and a half ago: how to make MSNBC work.

While he was gone, MSNBC changed from traditional news to a political network with a liberal lens. Now that it is mired in a ratings slump, Lack's mandate as chairman will be figuring out if MSNBC needs a complete overhaul or a sharpening of its mission.

The current picture is seriously ugly. Through early March, Chris Hayes' viewership at 8 p.m. on weekdays was down 23 percent from last year, Rachel Maddow was off 24 percent and Lawrence O'Donnell down 26 percent. Among the 25-to-54-year-old demographic that is the basis for advertising sales, the prime-time lineup lost nearly half its audience. Daytime isn't much better.

Naturally, one would expect that the network's revenues would have taken a 20-point or more haircut. Nope: 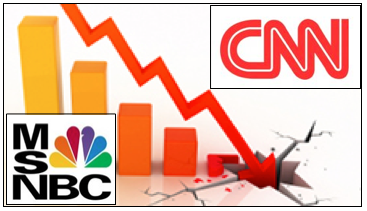 The shift in focus during the day has led some fans to fear MSNBC may abandon its liberal focus altogether.

That's very unlikely. Despite the ratings, analyst SNL Kagan predicts MSNBC will earn $509 million in revenue this year. While that's below Fox News Channel ($2.18 billion) and CNN ($1.16 billion), that would still be slightly up from $501 million in 2014, Kagan said.

20-point and worse ratings declines combined with a 1.6 percent revenue increase would seem to make no sense. What's going on here?

Readers may suspect that advertising and media-placement firms, disproportionately populated with fever-swamp "progressives" themselves, would be to blame for compromising their clients' advertising effectiveness by keeping ad dollars at the two losers while hoping no one notices. That's apparently not the case. Those businesses are very competitive, and those who work in them, as is the case in most industries, tend to like keeping their jobs and feeding their families more than their pet political causes.

Instead, the cable and satellite companies are overpaying to carry them:

The financial health is largely due to long-term deals with cable and satellite operators to carry MSNBC, made when the network sold itself as a counterbalance to Fox News, said Derek Baine, Kagan analyst. Bad ratings depress advertising prices, and while they would hurt MSNBC's future if they persist, the advertising is not as important as the carriage deals.

So the "evil" cable companies and satellite providers are subsidizing MSNBC and CNN just so they can be sure there's a viable "counterbalance" to the one network which actually tries to be fair and balanced.

Someone ought to ask the shareholders at Comcast, Time Warner, DISH Network and DirecTV why their companies are wasting millions of dollars on so few eyeballs.

This situation also prevents MSNBC and CNN, whose responses to falling ratings for nearly two decades now has been to drift further and further to the left, from having to take a hard look at what they do and how they do it.

Not that a comprehensive, open-minded re-think is really very possible. As Rush Limbaugh has said on several occasions, "progressive" newscasters and hosts will remain "above" concerns about profit and stay at their desks until the repo men carry them out while they're still in their chairs.

At the very least, these ill-advised cable and satellite financial arrangements are delaying that long-awaited day.