On Friday morning at Jezebel, a Gawker-affiliated web site, Natasha Vargas-Cooper thought she had Wisconsin Governor Scott Walker by the — well, you know.

In a post tellingly tagged "Conservative Werewolves," Vargas-Cooper was absolutely sure — so certain that she apparently felt no need to check any further — that Walker's proposed budget would allow its colleges to "to stop reporting sexual assaults." Vicious vitriol ensued (bolds are mine throughout this post): 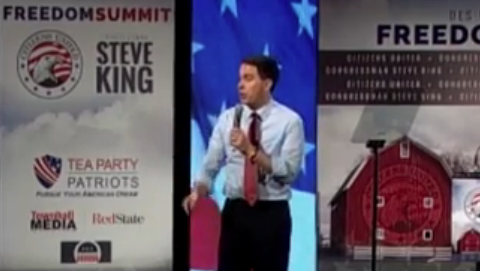 There are no policy recommendations in Walker's budget how or what would replace these reporting mechanisms. The Governor simply instructs that they should be deleted.

For those of you who are unfamiliar with the bewildering force that is Scott Walker, know this: he is a small-time guy who is having a big-time moment by playing the conservative werewolf, a role Chris Christie and Jeb Bush are so far unwilling to play in their presidential bids.

Brian Weidy at the supposedly reputable Daily Beast was among those who took the bait, writing of the proposal's "shocking language," and speculating that the Badger State Republican's move "may be the governor’s ploy to pick a fight with the federal government."

Lefty blogger Ana Marie Cox tweeted that Walker is "not scared of ISIS, terrified of campus rape stats getting out."

Unfortunately for Vargas-Cooper and those who found her story too good to check, it's all utter hogwash, as Brian Cates at Storify gleefully noted. Cates referred to an unbylined Friday afternoon Associated Press item carried at USA Today (but not at the wire service's national web site; apparently that's reserved for attacks on Walker). The AP's headline and first paragraph are all readers need to see:

The University of Wisconsin requested that Gov. Scott Walker remove a requirement that all 26 campuses report allegations of sexual assaults to the state every year because it already submits similar information to the federal government, a UW spokesman said Friday.

Does Scott Walker want colleges to stop reporting sexual assaults? It's not that simple

Jessie, the answer to the question is "no." You should have stopped right there. But nooooo:

As with most budget items, it's more complicated than that.

No it's not, Jessie. The contention is utterly false, as admitted — seven paragraphs later:

The governor's office further clarified that removing the duplicative report does not make any change to state or federal laws regarding the reporting of crimes.

"State statute changes were required to give UW System full authority status and the UW System requested the deletion of provisions of duplicative reporting requirements as part of the move to the authority," said Walker spokeswoman Laurel Patrick in an email. "In this case, UW System requested this report requirement be removed because there is already a federal reporting requirement related to sexual assault and harassment on campuses."

Patrick added that Walker's last budget increased funding for sexual assault victim services, and his 2015-17 budget proposal would increase funding to protect victims and their families.

So even if Walker is utterly vindicated, it doesn't really matter, and Opolen gave two Wisconsin leftist hacks an open mic to smear him:

Still, the optics of deleting requirements for sexual assault reporting set off a firestorm on the left.

Democratic Party of Wisconsin spokeswoman Melissa Baldauff questioned whether the deletion was "another so-called 'drafting error.'"

"One in four college women will be sexually assaulted during our academic careers — this is a serious issue that deserves more time and resources from politicians like Scott Walker, not less," Baldauff said in an email.

... "Gov. Walker had no problem rejecting other parts of UW's budget request, and he's had no problem in the past telling us we can't rely on the federal government to be there for Wisconsinites," (One Wisconsin Now research director Jenni) Dye said. "When it comes to sexual assault on college campuses, Walker is sending a message that he doesn't care enough to be involved and is happy to turn over control to campuses and the federal government."

Good grief. Baldauff has taken the one-in-five campus sexual assault lie and made it one in four. At that rate of growth, it will reach 100 percent in a year or so. Meanwhile, hapless Jenni Dye accuses Walker of not "caring" because he did something UW asked him to do.

Getting back to the original smear, Jezebel owes its readers a retraction and abject apology. As of 9:15 this morning, neither were anywhere to be found.

Others who took the bait need to acknowledge that they were had. Those retractions will probably also either be slow in coming, or won't happen.