HuffPo Columnist: Joni Ernst, Who Is a Combat Veteran, Shouldn't Claim to Be One

Joni Ernst is a perfect example. The strong-willed freshman Senator from Iowa describes herself in three words: "Mother. Soldier. Leader." Imagine the howls of outrage if a conservative went after a liberal female combat veteran as Andrew Reinbach at Huffington Post did on Friday. Reinbach tried to claim that Ernst is not really a combat veteran, and questioned "The Honor of Senator Joni Ernst."

Reinbach's infrequent output at HuffPo includes entries on how Republicans were committing an act of "sedition" by causing the September 2013 government shutdown Barack Obama and Harry Reid could have prevented at almost any moment, how the Supreme Court's nullification of President Barack Obama's unconstitutional recess appointments had thrown the nation into "chaos on a technicality," and how the NRA lies "about guns, the Constitution, and history."

With that background, an ignorant, unhinged rant against a strong conservative woman was right up Reinbach's alley (HT Twitchy; bolds are mine throughout this post): 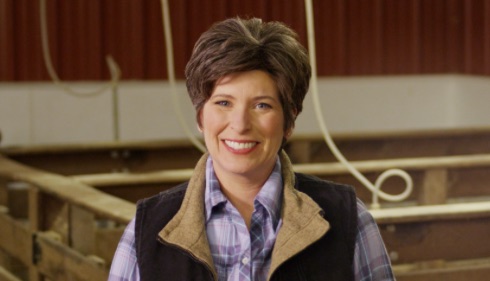 When most people hear "combat veteran," they think firefights with the enemy. But the military defines combat veteran differently -- as soldiers who served in a combat area.

Which brings us to Senator Joni Ernst (R-Iowa), one of the GOP's most recent stars. It was Sen. Ernst who was selected to give the Republican response to President Obama's recent State of the Union message this year.

Senator Ernst calls herself a combat veteran at every turn -- on her Senate web page, in campaign debates, and in her stump speeches. She can say this because she served in a combat zone.

And it's technically true.

Reinbach could have stopped there and said, "Y'know, anything I write from here is going to come off as immature whining, so I'll find another column topic."

That would have made too much sense. So, excuse the expression, Reinbach soldiered on:

She was company commander of the Iowa National Guard's 1168th Transportation Company during its tour of active duty in Kuwait and southern Iraq, from February 2003 to April 2004. But the unit was never in a firefight, or for that matter attacked at all; it delivered supplies, and later, guarded the front gate and ran perimeter patrol at their home base outside Kuwait City, Camp Arifjan.

Real combat veterans I spoke to don't think much of how the Senator talks up her combat duty. Larry Hanft, for instance, who earned the Combat Infantryman's Badge fighting in Vietnam, says, "By her definition, everybody who stepped off the plan in Kuwait is a combat veteran. Joni Ernst is using her military experience to gain a political edge and pull the wool over the eyes of the American people. She's a fraud..." Mr. Hanft is one of Sen. Ernst's constituents.

Mr. Hanft is also apparently obsessed and from all appearances virtually alone in his fevered contention, despite Reinbach's questionable claim of having spoken to "real combat veterans" (i.e., presumably other people besides Mr. Hanft, none of whom he named). We'll see later that another soldier Reinbach quoted has pushed back — hard.

The truth is that it's not "her" definition, it's Uncle Sam's, and it's been that way for 24 years (link is in original):

So it boils down to the fact that Joni Ernst really is a combat veteran, and Andrew Reinbach doesn't like it. Too bad, so sad, pal.

I'd love to have Reinbach tell everyone why those who were killed and wounded at Khobar Towers in 1996 shouldn't have been considered to be operating in a combat zone.

Even worse, to the military mind, the Senator doesn't correct people when they've said she's led troops into combat.

This gets scant respect from serving soldiers. Asked what a soldier should do in a case like that, Lt. Col. Alayne Conway says, "You'd clarify, and say 'Sure, I had friends who were in firefights every day, and those are the guys you should roll out the red carpet for.'" Lt. Col. Conway serves in the Army's Press Office in Washington.

Big mistake. Lt. Col. Alayne Conway's outraged response at being co-opted is at the end of Reinbach's rant:

Senator Joni Ernst is a combat veteran. Period. Andrew Reinbach manipulated my words, and I am angry and embarrassed that a so-called journalist would deliberately take out of context a small portion of our 15 minute discussion. I never questioned Sen. Ernst's service, or that of my brothers and sisters in arms; to allow the Huffington Post's readers to think otherwise is not only a disservice to Sen. Ernst, but to all those who wear the uniform of the United States. In a cheap attempt to besmirch the military service of Sen. Ernst, the Huffington Post instead has insulted all the men and women of the Armed Forces who have deployed in service to their nation. LTC Alayne Conway.

Reinbach whined back that he didn't do any such thing.

Horse manure, Andrew. We know who is being dishonorable, dishonest and irresponsible. It's not Joni Ernst. It's a hardened leftist desperate to advance his side's nonstop war on any and every strong, conservative woman.