Those 'Mythical' No-Go Zones in Paris: NBC and NY Times Recognized Them a Decade Ago; TNR Writer Says They're Still There

The leftist press's truth squads apparently believe they have successfully intimidated any news organization which henceforth wants to be considered respectable from ever again referring to any Muslim-heavy enclave in Europe as a "no-go zone," regardless of the facts and circumstances.

Snopes.com, the self-appointed, almost invariably left-driven debunker of supposed "urban legends," doesn't reach a specific conclusion, but the title of its post ("Caliph-Ain't") gives away their take. A Google search on "no go zones myth" (not in quotes) returns a slew of entries. Some of them include BusinessWeek, Talking Points Memo, the Atlantic, and MSNBC. The same search at Google News give us an additional self-satisfied item at the New York Times covering plans by Paris's mayor to sue Fox News. Well, before the censors complete their end-zone dance, they need to explain away a few quite inconvenient items. I don't believe they can.

The "no-go zone" term — sometimes hyphenated, sometimes not — appears to have first frequently surfaced during and after the European riots of 2005. Many of the most serious of them occurred in the suburbs, or banlieues, of Paris from October 27 to November 16 of that year.

On November 5, 2005, the Associated Press ("Residents of Paris' suburbs at mercy of criminal gangs, system") indicated the following (bolds are mine throughout this post):

Some officials suspect the unrest that reached into Paris proper early Sunday has in part been instigated by gangs hoping to turn their neighborhoods into no-go zones for police so drug trafficking and racketeering can thrive.

But the roots are broader than that.

The violence is forcing France to confront the long-simmering anger in its suburbs. They are fertile terrain for crime of all sorts as well as Muslim extremists who recruit frustrated youths. France has some 5 million Muslims, the biggest Islamic population in western Europe.

While it's not a demonstration of "success" in creating no-go zones, the AP's reference to "long-simmering anger" indicates that the banlieues had already been "fertile terrain for crime of all sorts as well as Muslim extremists" for some time. We'll see how long later.

On November 4, 2005, NBC News — yes, that NBC News — ran what appears to have been a morning digest item entitled "The Tone of the No Go Zones." It referenced its own coverage, while also citing items found at Gateway Pundit and the Brussels Journal blog. At the latter, the following passage described the nature of these zones:

... We are just witnessing the beginning of Europe’s problems: “The sweet dream of universal cultural compatibility has been replaced by the nightmare of permanent conflict.”

Our mainstream media, in attempts to preserve the Left’s chimera of “universal cultural compatibility,” hardly write about all this. Nevertheless, for some years now West European city folk and police officers have been familiar with the reality that certain areas of major European cities are no-go areas, especially at night and certainly if you are white or wearing a uniform. Three years ago, a French friend who had his car stolen learned that the thieves had parked the car in a particular suburb. When he went to the police he was told that the police did not operate in that neighbourhood and consequently would not be able to retrieve his car. This is Western Europe in the early 21st century.

Nicolas Sarkozy became France’s most popular politician by promising to restore law and order in the whole of France, including in the areas abandoned by previous governments.

"No-go zone" seems like pretty good shorthand for describing areas in which the police don't even "operate."

A month after the riots had subsided, the New York Times prepared one of its predictable blame-the-system pieces on the situation in the Paris suburbs. Lo and behold, the paper's Elaine Sciolino wrote the following:

La Courneuve (a suburb of Paris — Ed.) is a town that menaces but also welcomes. 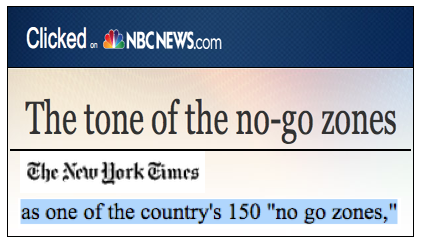 Branded by France's police intelligence agency as one of the country's 150 "no go zones," where police officers should enter only with major reinforcements, La Courneuve was caught up in the violence in which rioters torched cars, trashed businesses and ambushed the police.

So the Times wrote about very real no-go zones nine years ago. Now, it can't get enough of crowing about them as a "myth," and how irresponsible it is for Fox News or anyone else to claim that they exist.

Okay, so maybe in the intervening decade the French government and the Muslim community have performed an urban renewal miracle. Maybe no one is trying to enforce any form of sharia or otherwise harassing or victimizing non-Muslims in the banlieues. Maybe the police are now no more concerned about going into those areas than they are in any other section of Paris.

If that's true, someone forgot to tell the liberal New Republic's David Morrison, who wrote the following on January 8, shortly after the Charlie Hebdo massacre two weeks ago:

Visitors to Paris—and there are plenty in this, the world’s most beautiful city (I’m biased; I’ve lived here a decade)—sometimes stumble across the neighborhood where Charlie Hebdo’s offices are located. It’s an agreeable part of town, not far from the Place de la Bastille, with a Brooklyn-y mix of workers and hipsters, traditional shops and trendy bistros. Like the rest of central Paris, it is mostly white and prosperous.

It's also vastly unlike what you might call the real Paris, the tourist-free area where 80 percent of Parisians live: that doughnut of banlieues, on the other side of the Périphérique ring road. The word banlieue ("suburb") now connotes a no-go zone of high-rise slums, drug-fueled crime, failing schools and poor, largely Muslim immigrants and their angry offspring. The banlieues erupted in 1981 and in 2005, when rioters burned hundreds of cars and President Nicolas Sarkozy threatened to clean out the area with a high-pressure hose. He did not mention that the vast majority of its residents are French citizens, speak perfect French and, unlike his father, were born in France.

So Morrison got in his gratuitious liberal digs at Sarkozy. But concerning the issue at hand, either the New Republic journalist has been completely blind to massive physical and security improvements in the banlieues in the decade he has lived there, or there really hasn't been any substantive change, and they are as problematic for law enforcement and non-Muslims as they have ever been.

It seems quite reasonable to believe that it's the latter — especially once readers see what I'll bring up in a subsequent post.