Nick Kristof Asks: 'Is Islam to Blame' For the Charlie Hebdo Massacre?

On cue, at around 6 p.m. Wednesday, New York Times columnist Nicholas Kristof was still wondering: "Is Islam to Blame for the Shooting at Charlie Hebdo in Paris?" ("Shooting?" Singular?) Maybe he still is.

This was many hours after it was known that the perpetrators shouted "We avenged the Prophet Muhammad!" and "Allah Akbar!" after completing the Charlie Hebdo massacre of 12 in Paris, and after ISIS celebrated the "blessed operation." Excerpts from Kristof's column, published in Thursday's print edition, follow the jump.

Based on the column's URL, it appears that Kristof's original working title was "Lessons From the Charlie Hebdo Shooting in Paris." I can't say I blame him for the title change, because it's clear that Nick, who apparently stll believes, as he stated in 2005, that Mao Zedong's "legacy is not all bad,", is determined not to learn anything (italics are his; bolds are mine throughout this post; numbered tags are mine):

Is Islam to Blame for the Shooting at Charlie Hebdo in Paris? 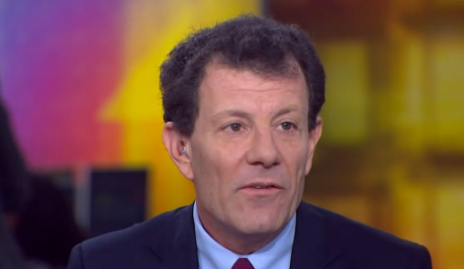 ... Outraged Christians, Jews or atheists might vent frustrations on Facebook or Twitter. Yet, while we don’t know exactly who is responsible, the presumption is that Islamic extremists once again have expressed their displeasure with bullets. [1]

Many ask, Is there something about Islam that leads inexorably to violence, terrorism and subjugation of women?

The question arises because fanatical Muslims so often seem to murder in the name of God, [2] from the 2004 Madrid train bombing that killed 191 people to the murder of hostages at a cafe in Sydney, Australia, last month. I wrote last year of a growing strain of intolerance in the Islamic world after a brave Pakistani lawyer friend of mine, Rashid Rehman, was murdered for defending a university professor falsely accused of insulting the Prophet Muhammad. [3]

Some of the most systematic terrorism in the Islamic world has been the daily persecution of Christians and other religious minorities, from the Bahai to the Yazidi to the Ahmadis.

Then there’s the oppression of women. Of the bottom 10 countries in the World Economic Forum’s gender gap report, I count nine as majority Muslim.

... Terror incidents lead many Westerners to perceive Islam as inherently extremist, but I think that is too glib and simple-minded. [4] Small numbers of terrorists make headlines, but they aren’t representative of a complex and diverse religion of 1.6 billion adherents.

... One of things I’ve learned in journalism is to beware of perceiving the world through simple narratives, because then new information is mindlessly plugged into those story lines. In my travels from Mauritania to Saudi Arabia, Pakistan to Indonesia, extremist Muslims have shared with me their own deeply held false narratives of America as an oppressive state controlled by Zionists and determined to crush Islam. That’s an absurd caricature, and we should be wary ourselves of caricaturing a religion as diverse as Islam.

Let’s also acknowledge that the most courageous, peace-loving people in the Middle East who are standing up to Muslim fanatics are themselves often devout Muslims. Some read the Quran and blow up girls’ schools, but more read the Quran and build girls’ schools. [5] The Taliban represents one brand of Islam; the Nobel Peace Prize winner Malala Yousafzai the polar opposite.

... Let’s stand with Charlie Hebdo, for the global outpouring of support has been inspiring. Let’s denounce terrorism, oppression and misogyny in the Islamic world — and everywhere else. But let’s be careful not to respond to terrorists’ intolerance with our own.

[1] — Kristof's column was written in mid-late aftenoon and was, based on when the first comments appeared, posted at around 6 p.m. As noted in this post's introduction, it was already quite well-known that "Islamic extremists" conducted the massacre.

[2] — Let's amend that sentence: "The question arises because fanatical Muslims so often tell us that they murder in the name of Allah, and celebrate their acts as carrying out Allah's will." That's better.

[3] — A friend of Kristof is killed by murderous Muslim terrorists, and all he will acknowledge is "a growing strain of intolerance." It's probably not much of a stretch to contend what we have here is a man who won't recognize the reality of Muslim terror until it kills him or someone in his immediate family — if even then.

[4] — At the very, very least, it is not "too glib and simple-minded" to assert that there is a malignant branch of the Muslim religion comprising a large minority of adherents which "is inherently extremist." At the very worst, it's as Roger Simon at PJ Media contended yesterday (link is in original; italics are his):

Al-Qaeda, ISIS and the Muslim man on the street all work from the same play books; they need no outside advice.  And those play books are the holy texts of Islam, the Koran and the Hadith.  All you need to know is there.

Egypt’s el-Sisi is right.  Islam is in desperate need of a reformation, because right now it is not even a religion.  It is a virus.

... Meanwhile, one of the terms that should have been shot dead with these is murders as well is “Islamophobia.”  From Hamas to ISIS to the Paris psychopaths, anyone who does not fear Islam is irrational, not the other way around.  I fear Islam because I criticize it frequently.  Some religious nutcase could run through my door and shoot me and my family at any time. It’s the simple truth.  The folks at Charlie Hebdo are my brothers and sisters and I grieve for them.

[5] — The problem is that the "courageous, peace-loving people in the Middle East" are largely losing. One notable exception is Egypt, which for its efforts has been sharply criticized by the Obama administration and by the New York Times for stopping the Muslim Brotherhood's planned sharia law-based tyranny there.

Kristof's column is one of the most obvious exercises in willful ignorance one will ever see.