In the midst of properly blasting the New York Times for its disgraceful editorial attacking the NYPD, Fox Business News's Davd Asman has raised an important question which goes to the paper's fundamental integrity. Specifically, did the Times acquiesce to active efforts by Mayor Bill de Blasio's office encouraging them to go on the attack, effectively serving as his mouthpiece?

The question also occurred to me several days ago as I read DNAinfo.com's accounting of New York City Mayor Bill de Blasio's heavyhanded attempts to get local and even state Democratic politicians to condemn the police department. Excerpts from Asman's Friday column containing that question follow the jump (bolds are mine): 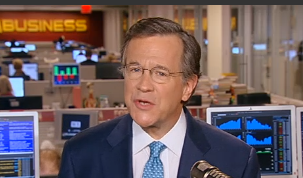 The New York Times is clearly feeling the heat over an atrocious editorial they published on Tuesday blaming New York City cops for feelings of "self-pity" and "victimhood" after two of New York's finest were gunned down in cold blood as they sat in their patrol car.

The editorial, published just three days after the funeral of one of those cops, was not only offensive to the sensibilities of New Yorkers who are grateful to our "men in blue," it was absolutely heartless in its timing. This was an editorial venal enough to rankle even liberal New Yorkers.

Then on Wednesday, the New York Post reported that Mayor Bill de Blasio's office was in hyper-overdrive after the mayor was dissed by hundreds of cops at Officer Rafael Ramos's Saturday funeral. According to the Post (quoting the influential website DNAinfo), on Sunday and Monday, the mayor's office called friends and supporters of influence, trying to get them to publicly support the mayor and condemn the police union and associations.

... While I obviously don't have access to phone records or emails between the mayor's office and the Times' editorial board, the mayor's push with allies on Sunday and Monday and the editorial's appearance on Tuesday seems more than coincidental.

... Frankly it strains credulity to believe that the mayor's office would miss its friends at the New York Times editorial board when it was putting the squeeze on friends and associates for help. And the editorial completely fit the narrative the mayor was looking for ... though in fairness to the mayor, in a far less artful manner than anything he has said.

I don't know, David. The mayor hasn't exactly been artful, either. But yes, he hasn't yet publicly stooped to using language like "passive-aggressive contempt and self-pity," as the Times's editorial did — though if Asman's speculation is correct, they may have recommended it. For what it's worth, the editorial's hostile langauge seemed contrived to me when I read it, as if someone had suggested what should be written.

If that is indeed true, then a newspapers which has structured itself corporately to ensure that it is beyond ordinary shareholder influence so it "has the freedom to take positions that they deem to be in the interest of journalism without fear of the reaction of public stockholders" has allowed itself to serve as its city's mayor's undisclosed megaphone in a concerted political attack on public servants. It's bad enough that the Times obviously and routinely performs this service for the Obama administration and Democrats in their partisan DC battles. But, again if true, taking this type of cooperation to attack those who keep the city and the Times safe and secure would truly hit a new low.

That attack, influenced or not, has apparently widened to include Asman:

So now the New York Times is attacking me. A Times representative sent a message to a compliant news network, claiming that my charges and speculations were "ludicrous." Rather than own up to the despicable notions of an editorial that refers to a "snarling sense of victimhood" among police officers, they go on the attack.

The one thing the Times apologist did not do was categorically deny that there was any contact between the mayor's office and anyone on the Times' board between the Saturday funeral and the Tuesday editorial. Such a denial would be hard to believe, but at least it would put them on record.

I await such a denial, as I await an apology for an infantile editorial denigrating the lives and spirit of a police force that has saved thousands of lives through its heroic actions over the years.

Don't sit by your phone or computer waiting for that apology, David.

It cannot be emphasized enough that the mayor and now the Times are giving aid and comfort to cop-haters nationwide. Recent headlines around the country prove it.