The Times editorial insisted that the NYPD has "squandered" its presumptive respect in its treatment of Mayor Bill de Blasio since a bi-racial grand jury's December 3 decision not to indict officers on the scene in July when Eric Garner died on Staten Island. This is from a newspaper which has squandered its own credibility in this matter by either ignorantly or deliberately — I would argue the latter — failing to identify the true nature of the assorted "Justice For All" march and "protest" participants and the killer who claimed to have murdered NYPD officers Wenjian Liu and Rafael Ramos in their name.

The editorial's opening statement gives away the game, namely that it's just not fair that the police see the mayor's current statements of support as empty, hollow gestures — even though de Blasio has never backed away from any of the statements which have so angered the city's cops:

Mayor Bill de Blasio has spent weeks expressing his respect and admiration for the New York Police Department, while calling for unity in these difficult days, but the message doesn’t seem to be sinking in.

Nobody in blue believes de Blasio's alleged shows of "respect and admiration," because they have no reason to.

Former Gotham Mayor Rudy Giuliani and many others have correctly asserted that de Blasio has "created an impression with the police that he was on the side of the protesters."

That's hardly an unfair charge. After the decision not to indict in the Garner case was announced, de Blasio had two chances to get it right. He blew both.

In a very biased report, the Washington Post's Abby Phillip identified them in a December 4 report (bolds are mine throughout this post): 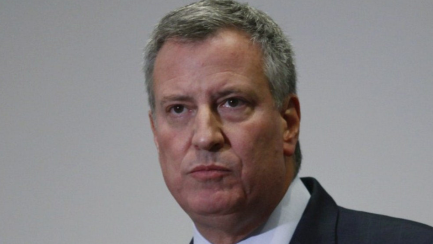 “I’ve had to worry over the years… is Dante safe each night?” de Blasio said at a news conference, hours after the decision was announced. “Is my child safe, and not just from some of the painful realities of crime and violence in some of our neighborhoods, but safe from the very people they want to have faith in as their protectors? That’s the reality.”

It was a tough stance for a city mayor to take in response to a case involving his own police force. And the law enforcement community, which viewed his comments as something of a betrayal, responded with anger.

Sorry, Abby. It wasn't a "tough" stance. It was ignorant, gutless and infuriating.

If the Mayor really thinks his son is in a similar level of danger from the cops as he is from the city's violent criminals and gangs, he ought to compare how long Dante goes unaccosted walking through the Bedford Stuyvesant neighborhood in Brooklyn at night to how long he goes unharmed hanging out at an NYPD police station.

de Blasio had a second bite at the apple the next day. Even after having a day to perhaps calm down and given the opportunity to put down his thoughts in writing, he still wouldn't leave the grievance-mongering fever swamp, writing as follows:

... Centuries of racism precede us. But working together, we can turn from that history and make a profound and lasting change in the culture of law enforcement and bring police and community closer together.

We’ve dramatically reduced the overuse and abuse of stop-and-frisk, initiated a comprehensive plan to retrain the entire NYPD to reduce the use of excessive force and to work with the community, reduced arrests for minor marijuana possession, and given officers body cameras to improve transparency and accountability.

And we know there is much more to be done.

Finally, in recent weeks, protesters and activists have adopted a phrase that should never have to be said, but that the stains on our country’s history demand we say: Black Lives Matter.

So, in Bill de Blasio's world, it's the culture of law enforcement which has to change, especially the aggressive, broken windows policing strategy Giuliani put into place in 1994 and which Michael Bloomberg, for all of his considerable faults in other areas, allowed to continue.

As seen below, the strategy de Blasio doesn't like took the city from being one of the most dangerous places in the country to one of its safest:

de Blasio's immovable position is proof no amount of evidence, no matter how utterly overwhelming, will cause a committed leftist — which the mayor indisputably is, and then some — to change his or her mind, and certainly not their worldview.

de Blasio's invocation of the protest mantra "Black Lives Matter" — as if anyone, especially in the NYPD, has ever said that they don't — can only be seen as providing aid and comfort to anti-cop disrupters.

It didn't seem possible that he could make matters worse, but de Blasio did. In an incident the Times editorial conveniently ignored, de Blasio gave violent protesters an undeserved benefit of the doubt in mid-December when some of them attacked his city's men in blue:

Bending over backward to praise the city’s anti-cop protesters for their “peaceful’’ behavior — even as some chanted on Saturday night, “What do we want? Dead cops! When do we want it? Now!” — the mayor said the attack was “an incident . . . in which a small group of protesters allegedly assaulted some members of the NYPD.”

“When cops are the accused, the word ‘alleged’ never enters into the discussion,” fumed Michael Palladino, president of the NYPD Detectives’ Endowment Association.

Ed Mullins of the Sergeants Benevolent Association called de Blasio a “total nincompoop” for his handling of the situation.

“His actions are contributing to the injuries that are being received by the NYPD,” Mullins said.

Mullins is right. de Blasio is either too naive or doesn't care (my money is on the latter) that his indulgence of protesters, even after they turn violent, emboldens them to engage in more violence.

Bill de Blasio has never apologized for any of this, or even recognized even the slightest bit of error on his part. The guess here, and the message he is certainly communicating by not apologizing, is that he hasn't done so because he still thinks he's right.

If that's true — and those closer to the situation, including police union leaders, are certainly in a better situation than anyone to judge that than Times editorial writers are from their isolated, high-security Manhattan perches — then he deserves every bit of contempt that has been directed his way. He will continue to deserve it until he recognizes that those he is criticizing are all that stand between the way New York is now and the dangerous, murderous hellhole it was just 20 years ago.

Let's also make something else clear: de Blasio's actions and statements, as seen in incidents in recent days around the country, have made life more dangerous for all cops. That argument applies, though to a lesser degree, to the Times editorialists attacking the NYPD instead of telling the mayor to get a grip. That's exactly what they would be doing if Rudy Giuliani had somehow gotten himself into a position this difficult.