AP Pair: Michael Brown's Hands Weren't Up, But 'For Some, That's Irrelevant'

To grievance-mongers in the fever swamp, Trayvon Martin will always be a cute little kid who had just bought Skittles and iced tea, and then got shot by a bloodthirsty racist on neighborhood watch. The truth — that Martin bought Skittles and AriZona Watermelon Fruit Juice Cocktail, two of the three key ingredients in a mind-altering, dangerous concoction known as "lean," and that Martin's autopsy showed "liver damage ... consistent with ... excessive 'lean' usage" — doesn't matter.

Taking dishonesty to the next level, the mythology surrounding Michael Brown's death at the hands of Ferguson, Missouri police officer Darren Wilson, which insists that Brown had his hands up and said "Don't shoot!" has been completely discredited. But that doesn't matter, because, y'know, it's a "metaphor" that can't be allowed to go away. The Associated Press, via reporters David A. Lieb and Holbrook Mohr, disgracefully — but all too typically — gave the reality-deniers a 980-word story to spread their garbage (bolds are mine throughout this post):

"Hands Up. Don't Shoot!" became a rallying cry for protesters in the streets of this St. Louis suburb and a symbol nationwide of racial inequality for those who believe that minorities are too often the targets of overzealous police.

Yet the witness accounts contained in thousands of pages of grand jury documents reviewed by The Associated Press show many variations about whether Brown's hands were actually raised - and if so, how high.

There are "many variations" about the location of Brown's hands. They can be broken down into two categories: True, and False. It is fundamentally dishonest for the AP pair to pretend otherwise.

Here's an example of "false," from a Thursday morning report at ... the Associated Press. Here are the final paragraphs of a report all too forgivingly headlined "FERGUSON GRAND JURY PAPERS FULL OF INCONSISTENCIES":

Another man, describing himself as a friend of Brown's, told a federal investigator that he heard the first gunshot, looked out his window and saw an officer with a gun drawn and Brown "on his knees with his hands in the air." He added: "I seen him shoot him in the head."

But when later pressed by the investigator, the friend said he had not seen the actual shooting because he was walking down the stairs at the time and instead had heard details from someone in the apartment complex.

"What you are saying you saw isn't forensically possible based on the evidence," the investigator told the friend.

Shortly after that, the friend asked if he could leave.

"I ain't feeling comfortable," he said.

Another AP report by Adam Keller and David B. Caruso this morning described what really happened:

Wilson said Brown lowered his head and charged, pausing briefly when he was hit by the officer's fire, then kept coming. That account was backed up by some witnesses ...

Brown's "hands were balled up. He has his arms bent towards his chest and he's running like, you know, almost like a tackle running," said one witness, who watched from the backseat of a minivan. "The officer was backing up as he kept coming closer to him and he didn't stop."

As the Washington Post's Paul Cassell reported this afternoon, Wilson's recounting of the shooting was supported by the physical evidence:

... As those who have been following the case closely are aware, Wilson testified before the grand jury that Brown reached for his (Wilson’s) gun and a struggle for the gun followed, during which Wilson fired two shots. Later, Wilson pursued Brown and, after he turned and then charged toward Wilson, fired multiple shots bringing him to the ground about 8 to 10 feet away from him.

The physical evidence is consistent with his testimony.

... At some point in the altercation, it appears undisputed that Brown (and his friend Dorian Johnson) ran away from Wilson. Wilson pursued on foot and, according to Wilson, Brown eventually paused, turned around, and then charged at him.

So there's no excuse for the AP to have given those pushing the Brown mythology ink and bandwidth. But they did. Here is some of it: 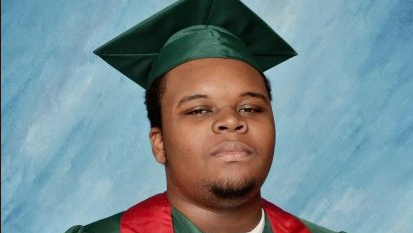 ... To some, it doesn't matters (sic) whether Brown's hands literally were raised, because his death has come to symbolize a much bigger movement.

"He wasn't shot because of the placement of his hands; he was shot because he was a big, black, scary man," said James Cox, 28, a food server who protested this week in Oakland, California.

... Protester Taylor Gruenloh, a 32-year-old white man from nearby Florissant, said that while he believes there's truth to claims that Brown had his hands raised when shot, the lack of proof makes little difference to protesters who have found it to be a unifying force.

"Even if you don't find that it's true, it's a valid rallying cry," he said. "It's just a metaphor."

... Architect Evan Chakroff was among the protesters this week in Seattle. He said the "Hands Up" gesture is far from a literal representation of the circumstances of Brown's death.

"My sense is that it's totally symbolic and a way of representing powerlessness" in the face of inequality and militarized police, he said.

Several demonstrators said focusing on the exact circumstances of Brown's shooting misses the point of the slogan.

No, I get the "point." It's to perpetuate a fiction — both physically and "metaphorically."