An Associated Press story late this afternoon has New York Senator Chuck Schumer saying the darnedest things, with only a tiny bit of pushback from reporter Charles Babington.

In the wake of a midterm election rout which saw Republicans win at least eight Senate seats, increase their House majority, and take gubernatorial races in at least three deep blue states (MD, MA, and IL), Schumer now says that Democrats erred in pushing passage of the Affordable Care act, aka Obamacare, at the supposed expense of economic issues. Hey Chuck, that's because the Keynesian clowns in the Obama administration thought they had the economy totally under control in 2009 thanks to the stimulus plan.

We now know that the stimulus plan failed to accomplish its stated goals. Unemployment was predicted to come down to 5 percent by late 2012. Instead, even with what I believe is a bit of book-cooking, the unemployment rate is still 5.8 percent — which of course is now not a big deal, because full employment has been magically redefined to be an unemployment rate of 5.5 percent.

Unfortunately but predictably, the AP's Babington didn't challenge Schumer on the stimulus at all, and only got so far as implying that there is no real evidence that Schumer was lobbying for an economic emphasis five years ago (bolds are mine): 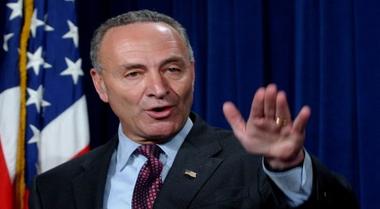 At a Washington news conference, New York Democratic Sen. Chuck Schumer said his party erred five years ago by putting health care reform ahead of jobs and economic priorities. The vast majority of Americans were relatively happy with their employer-provided health insurance in 2009, he said, and the health care overhaul's message was aimed at about 5 percent of the electorate: those who lacked insurance and who voted.

"To aim a huge change in mandate at such a small percentage of the electorate made no political sense," Schumer said. "Unfortunately Democrats blew the opportunity the American people gave them. We took their mandate and put all of our focus on the wrong problem - health care reform."

He said he expressed such concerns at the time. His office later said he "expressed those concerns privately to fellow Democrats."

Bub Obama did target the "vast majority of Americans" who were happy with their health insurance by lying to them, saying that "If you like your plan-doctor-provider-drugs," you can keep them." Sadly, it worked, and got the law passed.

I guess, since Schumer's admitting that Democrats went after the wrong problem, he'd be down with repealing Obamacare, right? Don't be silly.

Schumer's office, that magically talking inanimate object, is essentially admitting that there is not public record of the Senator's suddenly revealed longtime concerns.

Schumer said Democrats made it easier for Republicans to paint government as bloated and inept with "the rollout of the Obamacare exchanges, the mishandling of the surge in border crossers, ineptitude at the VA (Veterans' Administration) and the government's initial handling of the Ebola threat."

And the stimulus. Add the term "hostile to basic rights and liberties" and you can throw in the IRS, the targeting of journalists, Operation NSA spying, Choke Point, and a whole host of other items, some of which are including in the updated list of "900 well sourced examples of Obama’s lying, lawbreaking, corruption, cronyism, hypocrisy, waste, etc." found here.

Schumer repeatedly said Democrats must not run away from an active government.

"The 2014 election was not a repudiation of government in general," he said, but "just another sign of a deep frustration that government is not doing enough to fix our country's problems."

Schumer said he and other Democrats will propose specific policies later, but he hinted at several likely areas. He called for making college more affordable; making taxes progressive, or proportionately higher on upper incomes; spending more on infrastructure such as roads and bridges; and "changing labor laws so workers can demand more pay."

Schumer take on the elections fails to explain how Democratic Party gubernatorial candidates who either didn't run things well (Maryland's candidate mismanaged its Obamacare exchange into complete oblivion) or were running an entire state into the ground despite massive tax increases (Pat Quinn in Illinois) got their hats handed to them. Meanwhile, Republican governors who were supposedly vulnerable like Brownback in Kansas and Walker in Wisconsin because they restrained government and lowered taxes ended up winning quite handily.

As to the bolded phrase in the final excerpted paragraph — Gee Chuck, do you really think that taxes aren't "progressive" already and thus have to (finally) be "made" that way? Note well that the AP's Babington just let that falsehood slide by as if what Schumer said is the truth, when of course it's not.