On Monday, Missouri Governor Jay Nixon, a Democrat, ordered the National Guard into Ferguson, Missouri and declared a state of emergency in anticipation of a grand jury's decision about whether to criminally charge police officer Darren Wilson in the August death of Michael Brown. If only Nixon had called in the Guard, as virtually every governor of all political persuasions did in response to the riots of the 1960s, when it became clear shortly after Brown's death that law and order had broken down in Ferguson. But he didn't, allowing all manner of mayhem and destruction to go on for days.

Sari Horwirtz and Wesley Lowery at the Washington Post reported Friday evening that Attorney General Eric Holder and the U.S. Department of Justice are upset at Nixon's actions. But the two reporters failed to tell readers what happened in Ferguson in August when Nixon didn't act. This gives DOJ's position credibility with many readers that it emphatically does not deserve (bolds are mine): 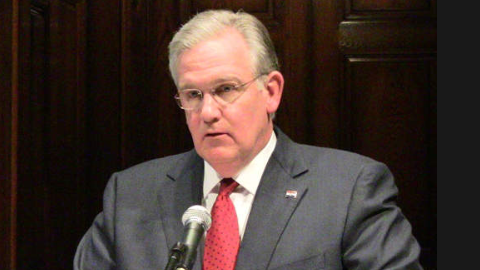 Holder also expressed concerns privately about Gov. Jay Nixon’s decision this week to declare a state of emergency at a news conference and activate the National Guard. The grand jury decision in the Ferguson shooting is expected to be announced in the next few days.

... A top aide to Holder called the governor’s office earlier this week to express Holder’s displeasure and “frustration,” according to a Justice Department official.

“Instead of de-escalating the situation, the governor escalated it,” said the official, who spoke on the condition of anonymity because he was not authorized to speak on the subject. “He sent the wrong message. The tone of the press conference was counterproductive.”

The people who have already "escalated" the situation are the career "protesters" whose mission in life is to create chaos to support their "America is insurably racist" narrative — a narrative which President Obama and his administration have at times seemed to encouraage — and dedicated criminals waiting to pounce if they think the coast is clear to pillage and plunder. The former ahve openly declared their intentions to commit "mass violence" if Wilson is not indicted.

Given what happened when the Guard wasn't called in back in August, it's not unreasonable to contend that DOJ and Holder won't be particularly bothered if  a new round of property destruction, injuries and perhaps even deaths occurs after the Wilson verdict is announced.

Nixon's call-out of the Guard shows that somebody in the Show Me State is finally and all too belatedly serious about protecting Ferguson's citizens. DOJ's opposition to his move is outrageous, and would be seen as such by everyone reading the WaPo report if Horwitz and Lowery had reminded readers, perhaps with accompanying photos, of what happened three months ago.