Brett M. Decker is a member of USA Today's Board of Contributors and "consulting director at the White House Writers Group." Early this evening, he effectively did double duty for the paper, both as a columnist and a journalist.

Decker appears to be the first person to report visibly in a national publication that "influential gay rights advocate and top Obama donor" Terry Bean was arrested on Wednesday and "charged with two felony counts of having sex with a minor last year." There were three links to Decker's column at USAT's front page at 7:43, while a story appearing at the site about 20 minutes earlier than Decker's forwarded from KGW-TV in Oregon is absent from its front page. The portion of Decker's discussion of the media double standard follows the jump (HT Instapundit; bolds are mine):

Conservatives complain that President Obama gets a free pass from the media, which acts as a de-facto public-relations shop for the Democrat in the White House. Never has that charge seemed truer than now as an ugly rape scandal unfolds on the west coast.

... This story was first reported by the local press, and there have been vague references to sexual trouble for Bean and Lawson since June, but the national media has not picked it up. That oversight is politically convenient for President Obama as he tries to pull off one of his riskiest political moves ever with his amnesty executive order.

If one of President George W. Bush's bundlers would have been charged with child rape, make no mistake about it, the media feeding frenzy would have been uncontrollable – which would be legitimate given the severity of the allegation. The silence surrounding Terrence Bean exposes the national media's partisan double standard in obscene detail. 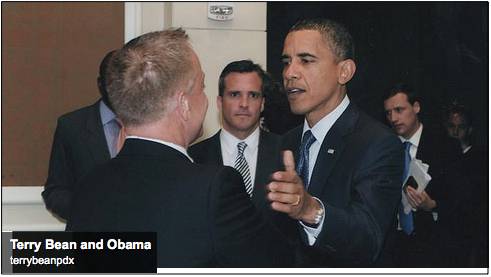 How big is Terry Bean in Democratic circles? Huge, as the following obsequious interview of Bean by Byron Beck and Zak Burns at KXL FM News 101 in Portland in May 2012 will demonstrate.

The Beck and Burns Fackbook page and the station's current lineup indicate that the pair apparently haven't been on KXL for over two years.

The video (really just audio) begins with the pair's excited anticipation at talking Bean later in the show, and then skips to that interview, which primarily concerned Obama's recent announcement that, contrary to years of claiming otherwise, that he now supported same-sex marriage:

Noteworthy excerpts (bolds are mine):

(2:33) Beck asks, while Burns is introducing Bean, "Can we just call him what he is? He's a kingmaker. ... one of the most influential men in Oregon who just so happens to be gay."

(4:50) Beck tells Bean that "You're being very humble. I mean, you were a queer pioneer. You started HRC, which is the Human Rights Campaign. You've been on the front lines of every fight that has to do with LGBT rights. And you were very influential also in the Clinton administration. So now I feel like you have had a say in what Obama did on Wednesday.

Bean's response, in part: ... "I've been at this game a long time. I was one of those kids who tried to kill myself when I was young (apparently over "being" a homosexual). And, so I still remember what that feels like. I do this work because I know those kids are out there still."

What, as potential sexual targets, Terry?

(6:37) Bean describes an encounter with former Pennsylvania Senator and former presidential candidate Rick Santorum where he tells Santorum that "The words you use and the way you use them kills kids (who think they are homosexuals)." Further, "Your are telling millions of kids out there that there's something wrong with them, they're evil, they're going to hell, and the veracity with which you are talking about this is killing kids. ... But I don't think much penetrates that mind."

(8:35) Concerning the Employment Non-Discrimination Act (ENDA), Bean would not be satisfied with such a bill passing Congress if it "only" addresses "LGB" and not "T" (transgenders).

(13:43) Beck wants "to talk about the fact that this guy, Terry Bean, very influential in the city and the state, was an early adapter (sic) to the Obama campaign when all the gays were down with Hillary because, well, we just thought she was the better choice. You stuck with Obama. I was wondering why. Explain that.

(14:39) Bean responds: "I just felt very comfortable with him. I felt very confident. I felt he could win. ... I just got this sense of meeting with him that he was real."

(17:50) Bean responds to a survey finding that Republicans are generally happier than others by asserting that "Republicans don't have as much of a concern about the rest of the world." Two words, Terry: Charitable contributions.

As of 9:15 p.m. this evening, there was no mention of Terry Bean at the Associated Press, the New York Times (an item from 1991 doesn't count), the Washington Post, or the Los Angeles Times. Other than the two USA Today items described above, none of the 31 items returned in a 9:25 p.m. Google News search on Bean's name (in quotes) is from a national establishment press outlet.

Terry Bean won a Human Rights Campaign Legacy Award in 2008. His Flickr account is full of pictures with prominent Democrats, up to and including President Obama.

The HRC is nothing if not fast. A Google search indicates that Bean is on one of the organization's boards, but his name has already been purged from the group's related page.