Is TIME Dead Yet? Magazine Posts Op-Ed by a Muppet Pig on Feminism 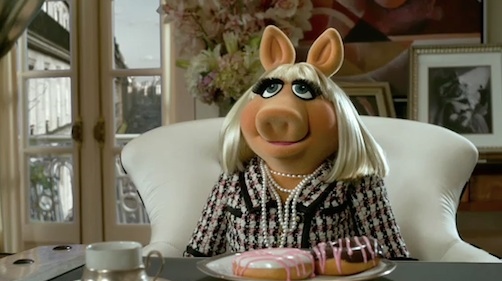 Now that all the power and swagger of the news magazines Newsweek and U.S. News & World Report have passed away -- even as the brands continue -- the death rattle of Time magazine is becoming obvious...when you run articles "written" by Muppets.

On Time's "Ideas" blog on Thursday, they posted an article headlined "Miss Piggy: Why I Am a Feminist Pig."  Apparently, the Muppet star never burned her bra, but feels like as an accomplished "Porcine American," she can be included in the pantheon of great feminists.

To clarify for reality-challenged readers, who might not understand that inanimate puppets don't write about women's issues, Time announced at the bottom "Miss Piggy’s remarks provided by The Muppets Studio."

The occasion for this lame piece of click-bait is an award. “The Muppet is joining Sandra Day O'Connor, Toni Morrison and others in receiving a major award honoring women.” Major? It’s a “First Award” from the Brooklyn Museum...actually a subset of the museum, the Elizabeth Sackler Center for Feminist Art. This "major" honor from Brooklyn began in 2012. Its 2014 honoree was Anita Hill.

The center's website currently promotes the infamous “Dinner Table” art piece by Judy Chicago, the one with the "vulva-motif plates." Judy Chicago designed the award as well. Piggy "wrote":

Some Internet opinion givers may question whether moi deserves such an honor. After all, some might say moi is just a mere Hollywood celebrity who cares more about her appearance, her star billing and her percentage of the gross than about women and women’s rights.

To which I can only respond: “Oh yeah!?!” By which, of course, I mean that moi is now and has always been an ardent feminist and champion of women’s rights.

They even wrote this weird passage about bra-burning and suggested the early 1970s was "long before I was born," which is, in Muppet reality, false: She was "born" in 1974.

It’s true, I did not march in women’s-rights parades down Fifth Avenue in the early 1970s. (That was long before I was born.) However, today, in solidarity with my feminist foremothers, I go shopping on Fifth Avenue whenever possible.

And it is true, I did not burn my bra. Was this a political statement? No, it was simple common-sense economics. When one pays top dollar for intimate apparel like moi does, setting it ablaze is wasteful, improvident and highly incendiary.

And yes, it is true that I am a Porcine American. How can a … ahem, pig … be a feminist? After all, the p word has long been associated with the very antithesis of feminists “male chauvinist.” This, alas, is a vestige of latent “species-ism.” Sure, there are male chauvinist pigs, but there are also male chauvinist humans and, on very rare occasions and at their own peril, male chauvinist amphibians. Let us not besmirch an entire species because of the sins of a few.

So, now that I have dispatched the naysayers, moi can accept this Sackler Center First Award with my head held high and my feminist bona fides affirmed.

Back in a 2012 press conference, the Muppets were asked how they felt when Eric Bolling from Fox News discussed their latest movie and said the Muppets were “pushing a dangerous liberal agenda and trying to brainwash children.”

Miss Piggy declared, “It’s almost as laughable as accusing Fox News of being news,” to which the audience, presumably press people since it was a press conference, burst into applause. Kermit replied, “Boy, that’s gonna be all over the internet. You are in such deep water.” Miss Piggy shot back: “If they take what I say seriously they have a real big problem.”