White House press secretary Josh Earnest held a “gaggle” for reporters on Air Force One on Monday around noon. The questioning on the Islamist shooting outside Dallas came up, with a reporter asking for Obama's reaction, but Earnest’s answer – no act of expression deserves violence – failed to satisfy.

Since the “gaggle” is an untelevised briefing and the White House transcripts traditionally avoid the identity of the reporter, we can only guess which “objective” journalist really, really wanted the cartoon contest denounced by the president: 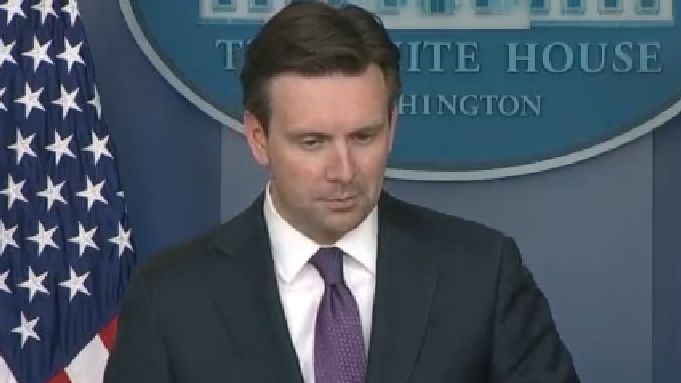 QUESTION: Can I ask you about the shooting in Texas? Does the White House condemn the contest, and do they hold the organizers responsible for inciting violence?

MR. EARNEST: Let me start by saying that the President was informed last night of the violence outside Dallas. There is an ongoing local investigation, so I won't have a whole lot to say about the specific incident. I will repeat a principle that you've heard from me before, which is specifically that there's no act of expression, even if it's offensive, that justifies an act of violence. And, again, there have been -- we have seen extremists try to use expressions that they consider to be offensive as a way to justify violence, not just in this country but around the world. And in the mind of the President, there's no form of expression that would justify an act of violence....

QUESTION: Did the organizers at the event incite violence by having that event?

MR. EARNEST: Well, again, there's no act of expression, even if some people might find it offensive, that could justify an act of violence.

QUESTION: Did the President find it offensive to have a contest drawing the prophet?

MR. EARNEST: Well, I haven't spoken to the President about it. I'll tell you that I was unaware of the event prior to some of the news breaking about the violence that occurred there last night.

“Drawing the prophet”? Is the questioner a Muslim? Or is he or she trying to be exquisitely sensitive? If Obama was asked to comment on ants crawling on a crucifix of Christ on video at a taxpayer-funded gallery, would this reporter say "Did the president find it offensive to have an exhibit disdaining the Savior?"

What a sense of priorities! Earnest kept condemning the Islamist shooters, and the reporter kept finding that utterly irrelevant. He or she wanted the "Islamophobes" condemned by the president.