This year’s Pulitzer Prizes didn’t seem to be rewarding an obvious liberal tilt, but Baptist Press is taking exception to how the Charleston (S.C.) Post and Courier won for a series on domestic violence called "Till Death Do Us Part," and alluded heavily to Bible-thumpers being wife-thumpers:

The Post and Courier series' first article, which noted that a woman in South Carolina dies every 12 days from injuries sustained through domestic violence, suggested a link between domestic abuse in the state and the complementarian view of gender. 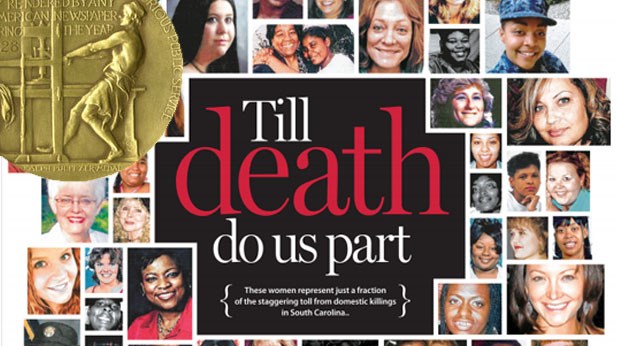 "Awash in guns, saddled with ineffective laws and lacking enough shelters for the battered, South Carolina is a state where the deck is stacked against women trapped in the cycle of abuse, a Post and Courier investigation has found," the paper stated. "Couple this with deep-rooted beliefs about the sanctity of marriage and the place of women in the home, and the vows 'till death do us part' take on a sinister tone."

Part three of the series asserted, "Part of the problem is rooted in the culture of South Carolina, where men have long dominated the halls of power, setting an agenda that clings to tradition and conservative Christian tenets about the subservient role of women."

Part three said pastors "inadvertently" can "fuel the problem" of domestic violence by teaching that "Scripture says women are to be submissive."

....A Sept. 14 Post and Courier follow-up article not included in the Pulitzer-winning series cited a need "to counter conservative Christian beliefs that women should submit to their men and that domestic unrest is best resolved in the home."

In a statement to Baptist Press, lead reporter Glenn Smith said the Post and Courier "would never imply that the Bible is to blame for abuse" but sought to highlight that "well-intentioned folks and traditional beliefs have at times gotten in the way of abused women getting the help they need in finding a way out of dangerous relationships."

Their story went to several Baptist pastors who explained how active they are in working against domestic violence in their communities.