How Much Are the Kennedys Like Jesus? Parade Magazine Counts the Ways

The Sunday-newspaper supplement Parade magazine lards on the Kennedy love today. The cover shows two of Teddy’s sons, Teddy Jr. and Patrick with the words “The Kennedy Legacy: The next generation carries on the family’s exuberant mission of public service.”

Parade even touted their deep religious faith, with the headline inside: “Guided by the Beatitudes and the notion that helping others is both a duty and a pleasure, the next generation of Kennedys carries on the family’s public service legacy.”

The occasion for this goo? They’re opening an Edward M. Kennedy Institute for the United States Senate in Boston. The Kennedys and their Catholic “moral code” go hand in hand, and Parade's Dotson Rader doesn’t mention womanizing or Chappaquiddick or any of the "right-winger" stuff: 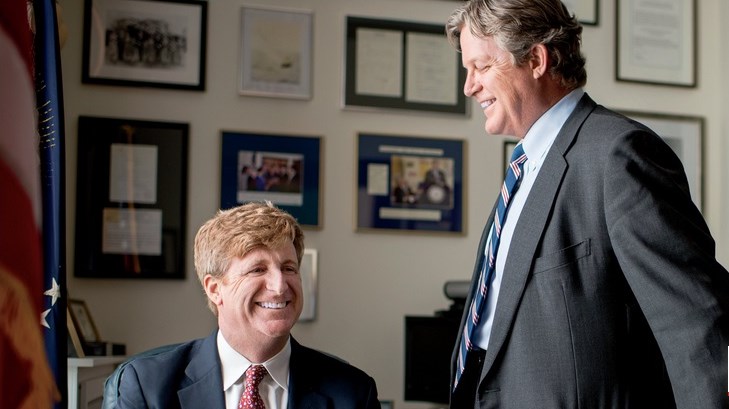 Regardless of how they’ve chosen to serve, the Kennedys share a zeal for public service that has endured for four generations. Patrick Kennedy, Ted’s younger son, says it all started with his “grandmother’s heavy emphasis on setting the moral code for the family....”

Victoria agrees: “Teddy always said his guiding principle was the Beatitudes. It’s about feeding the hungry, caring for the poor. It is what his brothers, mother and sisters all talked about: ‘Those to whom much is given, much is required.’ They had a real sense that you could do good in the world—and you had an obligation to.”

It’s not surprising that the Kennedy tradition of service is steeped in religion: The family is famously Catholic. “Bobby almost was a priest, so he was very religious,” says Jean [Kennedy Smith]. “We all were, in different ways. Because our parents were.”

Tim Shriver, who now runs Special Olympics after his mother Eunice Shriver founded it, adds to this legend of devout Kennedy Catholics:

Tim Shriver....credits Catholicism for rallying his family to serve not out of obligation, but because of a uniquely sincere desire to help others. “I don’t think ought is enough to sustain a commitment,” he says. “What our Catholic tradition has done well is make you not just ought to help, but want to help—hunger for it. Be hungry for justice, be hungry for healing, be hungry for connection, be hungry for leveling the playing field. That’s more than just a moral imperative. It’s believing that your best self will always be in solidarity with those who are having a hard time.” After all, he adds, “Jesus was all about [taking care of] the poor and the marginalized and then having a party.”

Eunice found her public service calling in helping children with intellectual disabilities because her oldest sister (and the third oldest of her siblings), Rosemary, was such a child. But despite Rosemary’s challenges, says Jean, she was never excluded from family fun. “We played tennis with Rosemary and she was in all our games. She went swimming with us. Nobody ever said, ‘We are going and you stay here.’ It was just accepted that you help people,” she recalls.

The Kennedy kids’ acceptance and inclusion of Rosemary was an inspiration for Jean as well, who poured a passion for the arts into making them available for people with disabilities by founding VSA: the International Organization on Arts and Disability.

This is where Dotson Rader's tendency to paper over Kennedy flaws just gets wildly ridiculous, even unprofessional. Rosemary Kennedy was just a little disabled? Wrong. The "moral code" of Rose and Joe Kennedy led to a lobotomy for Rosemary, followed by her being institutionalized in Wisconsin and hidden from the world, including from her siblings.

So revisit Tim Shriver talking about how the entire Kennedy brood all deeply imbibed of Jesus staying with the "marginalized"?

Parade is just like People magazine in allowing Tim Shriver to spin Grandpa Joe’s decision to lobotomize Rosemary, and then forbid anyone in the family from visiting her for decades. As Shriver himself tried to spin it:

Stoic but shattered by the results of his decision, he [Joe Kennedy Sr.] would never visit her there or – as far as I can tell – see her for the rest of his life. For years, her siblings did not even know what had happened to her. Members of her family were in such a flurry of activity and grieving other losses at the time that they apparently never questioned one sister’s absence until much later. The code of secrecy kicked in and Rosemary disappeared.