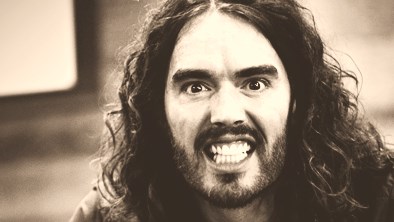 Can we get a recount? That’s the natural reaction to this headline in the U.K. Guardian: “Russell Brand voted world's fourth most influential thinker.”

Hannah Ellis-Peterson explained: "There are few figures who make the nation’s blood boil – either with sheer frustration or the spirit of revolution – quite like Russell Brand.However, the comedian turned activist has now earned the nod of approval from one of Britain’s most influential current affairs magazines, whose readers have voted him fourth in their annual table of the world’s top thinkers."

Socialist economist Thomas Piketty, newly installed Greek finance minister Yanis Varoufakis, and radical-left author Naomi Klein landed ahead of Brand in the vote. New York Times columnist Paul Krugman came in fifth behind Brand, which must just delight him. Prospect magazine explained why they included him on their ballot:

Brand is the spiritual leader of Britain’s disaffected anti-capitalist youth. In October he published Revolution, a manifesto for the radical redistribution of wealth and power. Dismissed by his opponents as a clownish opportunist, he is nevertheless the most charismatic figure on Britain’s populist left.

That doesn’t say much for Britain’s populist left, does it? Ellis-Peterson wrote "Brand’s latest book, Revolution, published in 2014, calls for the eradication of the “nation state”, advocating a radical wealth redistribution and a social revolution wherein 'corporate tyranny, ecological irresponsibility and economic inequality' are ended."

In the past, the magazine itself has not been altogether in favour of Brand’s personal revolution. In one review titled No, Russell Brand, You’re No Noam Chomsky, Brand is criticised for his “constant changes of tone from whimsical memoir to sombre pseudo-philosophic discourse”, with the book described as “unpleasantly jarring” and “gratingly predictable”.