Anyone who thinks the PBS NewsHour is a calm, rather nonpartisan forum on politics where no one does any trash-talking hasn’t seen Mark Shields on Fridays.

On Friday, Shields trashed Jeb Bush as a bumbler, and then just insulted governors Scott Walker and Chris Christie as “total novices” on foreign policy, like he’s a standup comedian. 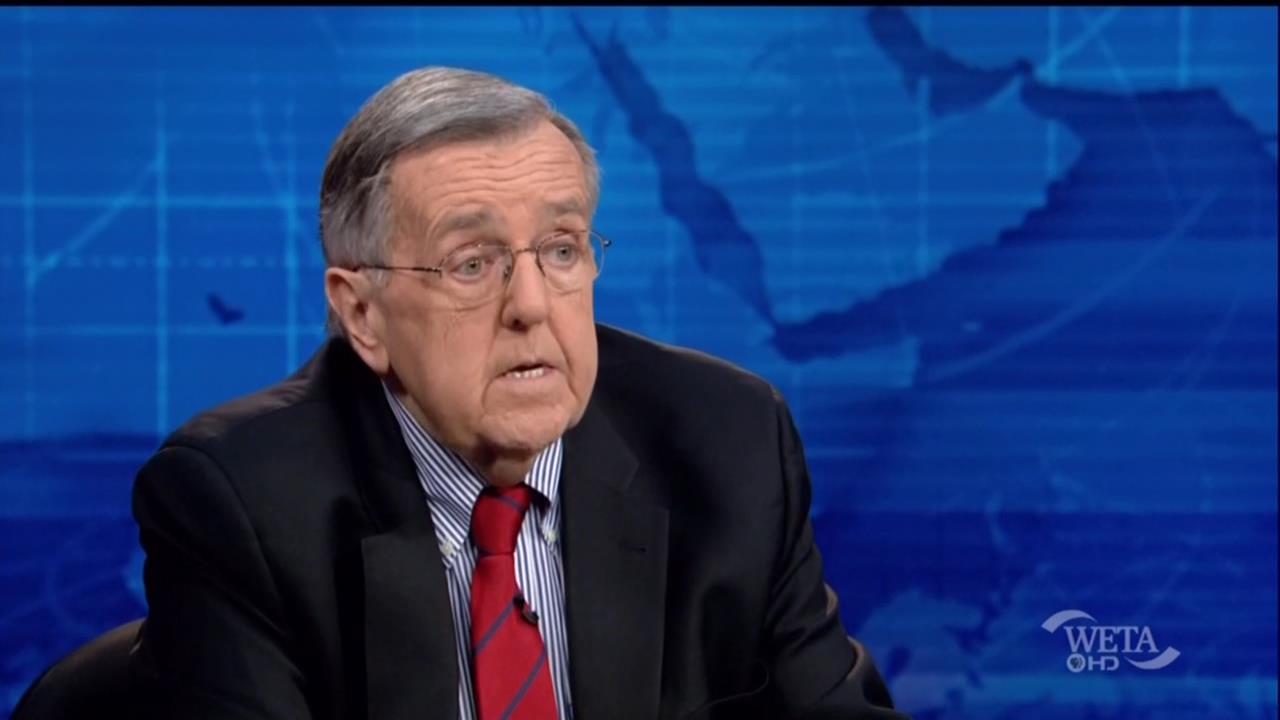 MARK SHIELDS: Jeb Bush is basically saying, I’m Bush. I’m not my brother. It was a bumbling, fumbling introduction, Judy. He wasn’t agile. He wasn’t comfortable with the subject. He’s fortunately running against two people, Scott Walker, who is a governor of Wisconsin, whose idea of foreign policy is beat Ohio State, and Chris Christie, whose trips to Chinatown and Little Italy have qualified him for foreign policy. [Let's assume that's also a "big fat eater" joke out of an overweight pundit. It's like David Brooks making baldness jokes.]

MARK SHIELDS: I mean, no, they are total novices. .

So how did Mr. Shields address the foreign-policy bona fides of Sen. Barack Obama eight years ago, the candidate with Reverend Wright as a “spiritual” adviser on foreign affairs? Here’s January 19, 2007:

JIM LEHRER: Finally, Mark, David used the term "political consultants," some of these people running for president and all of that. I was just looking to see -- we have Bill Richardson today -- there are now, I think, nine that are either people in exploratory committees, Obama, Dodd, Edwards, Kucinich, Vilsack, Biden, Kerry has talked about it, and obviously Hillary Clinton. It's going to be a very crowded field, is it not?

MARK SHIELDS: It is. And it is going to be.

JIM LEHRER: These are all considered serious...

MARK SHIELDS: Serious candidates. I mean, they're serious people, both sides, Jim. It`s the first time in 80 years that we've had not a president or a vice president seeking the nomination in either party. And it`s a wide-open race.

On February 16, 2007, Shields touted Obama’s proposals for troop withdrawals for Iraq in opposition to President Bush, with no jokes about his inexperience:

RAY SUAREZ: Do you recall anything like this happening, a rebuke to a president`s policy during a time of war?

MARK SHIELDS: I dissent with David. I think there are a number of proposals, not just Jack Murtha`s. Carl Levin’s had -- I mean, Barack Obama has one. Hillary Clinton has one, which you criticized, as well.

And right after the Walker-Christie insults, PBS turned to the Rudy Giuliani remark, where naturally, Shields and Brooks agreed the Republican base was a sick bunch of people:

JUDY WOODRUFF: But before I do, you mentioned Scott Walker. At one of the Scott Walker events this week, former New York Mayor, David, Rudy Giuliani made a statement that has gotten a lot of attention. He basically — he talked about President Obama and said, “He wasn’t raised like we were,” talking to the group. He said, “He doesn’t love this country as we do.” It’s gotten a lot of attention. Do we — how big a deal is it?

There’s sort of, I don’t know, who to blame, I don’t know, somebody like that. There’s almost sort of a Mort Sahl, Richard Pryor ethos where the person who says the most shocking thing is the best person. And sometimes on the stump, that seems to happen in partisan rallies. And Giuliani said something that I’m sure, like, shocked the bourgeoisie, but it’s unacceptable. And I hope it doesn’t define the Republican race.

JUDY WOODRUFF: You see it stopping there?

MARK SHIELDS: Judy, I think this — has to be signaled, has to be stated, and has to be called out. Rudy Giuliani’s language is unacceptable. This wasn’t given at some shadowy end-of-the-road, secret handshake to get into the room with sort of a paranoid fringe group. This was 60 people, major fund-raisers and donors, Republican, at the 21 Club, a bistro, a signature bistro in New York City.

And to this group of people, he basically said the president doesn’t like America. And this is — I go back to John McCain, who in 2008, when this was a hot issue, had the courage to confront a Republican audience in Lakeville, Minnesota, when they made this charge and said, no, that is untrue. President Obama is an American. He cares about this country. He loves this family, and I like him, but I disagree with him on the issues.

This is going to be an arms race about who hates Barack Obama and who can say he’s less of a patriot. Rudy Giuliani, who had six draft exemptions and got a judge to write a request to have him reclassified 2A so he didn’t have to serve in Vietnam, for him to start grading patriotism is unacceptable. And it’s going to take the Republican Party right down the road to defeat.

JUDY WOODRUFF: Well, there were several Republicans who denounced it after he said it.

DAVID BROOKS: Yes. I think that’s incumbent upon Republicans to do that, just to police the party. As Mark says, it’s self-destructive. It’s not only bad taste, bad manners, bad morality. The country doesn’t want that kind of thing, I don’t think.

On the bright side, they did end the segment by discussing a Washington Post story on the Clinton Foundation and its donations from foreign governments.