Maureen Dowd in New York Times: Brian Williams 'A Bomb That Had Been Ticking For a While'

New York Times columnist Maureen Dowd wrote a strong attack on Brian Williams (and the other network anchors) for Sunday's newspaper. Could this have been a factor in NBC's Saturday announcement? She began her Williams critique: "THIS was a bomb that had been ticking for a while." 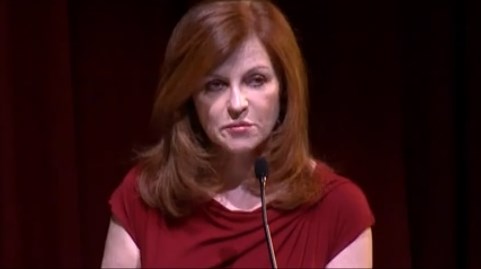 NBC executives were warned a year ago that Brian Williams was constantly inflating his biography. They were flummoxed over why the leading network anchor felt that he needed Hemingwayesque, bullets-whizzing-by flourishes to puff himself up, sometimes to the point where it was a joke in the news division.

But the caustic media big shots who once roamed the land were gone, and “there was no one around to pull his chain when he got too over-the-top,” as one NBC News reporter put it.

It seemed pathological because Williams already had the premier job, so why engage in résumé inflation? And you don’t get those jobs because of your derring-do.

Social media is taking the shine off Old Media:

Social media — the genre that helped make the TV evening news irrelevant by showing us that we don’t need someone to tell us every night what happened that day — was gutting the institution further.

Although Williams’s determination to wrap himself in others’ valor is indefensible, it seems almost redundant to gnaw on his bones, given the fact that the Internet has already taken down a much larger target: the long-ingrained automatic impulse to turn on the TV when news happens.

Although there was much chatter about the “revered” anchor and the “moral authority” of the networks, does anyone really feel that way anymore? Frothy morning shows long ago became the more important anchoring real estate, garnering more revenue and subsidizing the news division. One anchor exerted moral authority once and that was Walter Cronkite, because he risked his career to go on TV and tell the truth about the fact that we were losing the Vietnam War.

But TV news now is rife with cat, dog and baby videos, weather stories and narcissism. And even that fare caused trouble for Williams when he reported on a video of a pig saving a baby goat, admitting “we have no way of knowing if it’s real,” and then later had to explain that it wasn’t. The nightly news anchors are not figures of authority. They’re part of the entertainment, branding and cross-promotion business.

This is brutal. It's also spot on -- at least when there isn't unavoidable breaking hard news. Dowd whacks away at ABC's star. "When current ABC News anchor David Muir was still a correspondent, some NBC News reporters had a drinking game about how many times he put himself in the shot and how many times his shirt was unbuttoned." Then she turned back to Williams:

With no pushback from the brass at NBC, Williams has spent years fervently “courting celebrity,” as The Hollywood Reporter put it, guest starring on “30 Rock,” slow-jamming the news with Jimmy Fallon and regaling David Letterman with his faux heroics: “Two of our four helicopters were hit by ground fire, including the one I was in, RPG and AK-47.”

As his profession shrinks and softens, Williams felt compelled to try to steal the kind of glory that can only be earned the hard way.