Liberals are going into deep mourning over the television death of Stephen Colbert, Very Badly Disguised Liberal. They think this is an "unparalleled achievement." In Wednesday's paper, TV writer Bill Carter of The New York Times lined up all of Colbert’s competitors to call him a genius for disparaging conservatives with so much panache. 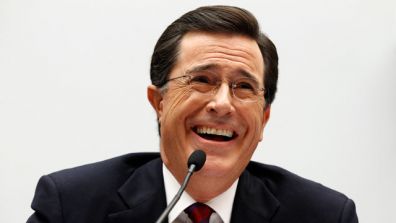 “For nine years, Stephen Colbert has relentlessly maintained his pompous, deeply ridiculous but consistently appealing conservative blowhard character he has left an indelible mark on late-night television comedy,” Carter wrote. “Consistently appealing?” To whom? Liberals presume “why, everybody enjoys mocking conservatives as opposed to reading.”

It’s these cheap, repetitive insults that don’t deserve a Hall of Fame induction, but liberals love hating conservatives so preciously that anything that helps them demean their opponents as God-fearing, America-loving morons is an instant classic.

Carter continued: “And he did it in a way almost no one thought was possible, or sustainable: as a fake host, a fictional character using Mr. Colbert’s own name who was an elaborate parody of a bloviating political talk show host.” Then came the parade of eulogies:

“I remember pleading with Dixon to tell Stephen it was a terrible mistake to do a character the whole time,” Mr. Kimmel said. “That it wasn’t going to last, and also not to name the show ‘The Report’ as a joke. It was just going to confuse everybody. And he did, anyway, and of course, it was a smashing success in every way.”

Like other competitors, Mr. Fallon professed unabashed awe that Mr. Colbert could sustain this performance at such a high level for so long. “Before he won the Emmy, I had been preaching that people had to recognize what he was doing: He’s faking a person,” Mr. Fallon said. “I was one of those who said, ‘He’ll do it for six months and then he’ll move on.’ Imagine if you were still trying to do the Coneheads on ‘Saturday Night Live.’ It’s gets old. But not this. He’s a genius.”

“What’s interesting about what Colbert is doing,” Mr. Gervais said in an interview, “what’s brave and possibly confusing about it, is that he’s always used his own name.” He added: “It can be a dangerous game to play. He presented himself as the character, and now he’s not going to be it. And people are going to miss the character. It’s a joy to watch someone do a really great parody with a character saying the opposite of what you know is right.”

That is the essence of what is upsetting so many of Mr. Colbert’s fans. While moving up to a bigger stage is in the tradition of late-night stars pushing their careers forward — as Mr. Letterman, Mr. O’Brien and Mr. Kimmel have all done — none of those moves have required a singular comic character’s disappearing forever.

Mr. O’Brien commended Mr. Colbert for breaking what he called the American tradition. “Our system is, if there’s another nickel to be found in it, you keep playing that character,” he said, “just beat it to death — and then do it another 10 years.”

Liberals are mourning Colbert’s ascension into the mainstream of TV, where he might have to pretend to like conservatives, as Carter explained in an interview with The Huffington Post:

"Colbert has alienated some conservative viewers, clearly, by the way he's mocked them, and he's going to have to smooth that out. He can't cut off part of the audience," Carter said. "I think the guy is super bright, and he's going to understand all of this. I think his approach will be, 'Yeah, that was my former persona, and this is now a different guy,' and he'll present himself differently."