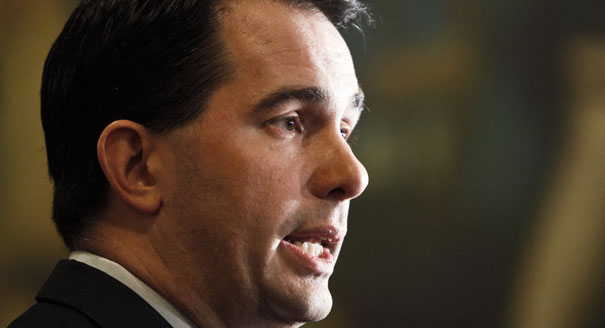 Wisconsin Gov. Scott Walker has presidential aspirations, so the liberal media will reliably leap on any tiny gaffe that liberals can locate. The liberal group One Wisconsin Now found one among undated letters that district attorneys dug up from his tenure as Milwaukee County Executive. M.D. Kittle at Watchdog.org explained:

This week, the [AP] BIG STORY, the mainstream’s next Walkergate, is an undated letter, reportedly at least a decade old, that Walker sent to prominent Milwaukee attorney Franklyn Gimbel.

Walker, who was Milwaukee County executive at the time, signed the letter, “Thank you and Molotov.”

The mainstream press, from the Milwaukee Journal Sentinel to New York Magazine chortled, he really meant to say ‘mazel tov,’ the Hebrew phase that literally means ‘good destiny’ or, less literally, “good luck,” not Molotov, or something often associated with an explosive device.

To make any of this relevant or newsworthy, the media et al. tried to tie in this decade-old typo with Walker’s private meeting this week casino mogul and big shot GOP donor Sheldon Adelson in Las Vegas. Adelson dumped in big bucks into Walker’s campaign coffers during the left’s unsuccessful drive in 2012 to oust the governor in the middle of his first term.

When the “big story” broke Wednesday, Walker shook it off, chalking up the letter to a typo.

“My thumb has healed up and my bald spot is boring now, and they have to talk about things like that,” the governor said of the media buzz surrounding Mazel Tovgate.

The Journal Sentinel did allow that “Microsoft Word doesn't have an automatic correction function. But if you type mozoltov -- a phonetic spelling of mazel tov -- Microsoft will suggest "molotov" as an alternative spelling.” They joked "Walker may want to add a little kosher to his deli."