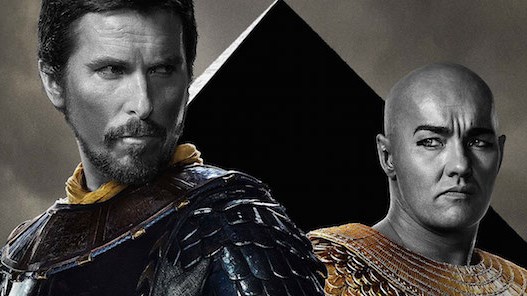 At Deadline Hollywood, Anthony D’Alessandro insists “The question remains whether faith-based audiences — the prime crowd for Exodus [Gods and Kings] – will show up in numbers to spur word-of-mouth given some of the pic’s creative liberties.” Or as the Drudge Report tweaks, will there be an exodus from Exodus.

That God is played by 11-year-old Isaac Andrews as a bratty and terrifying pre-teen is but one absurd choice in this biblical action drama that feels excessive in every way imaginable, from running time (nearly 2 1/2  hours) to melodramatic acting to the conspicuous amount of computer generation....

Michael Cieply of The New York Times raised Stephen King's Children of the Corn in an October story:

Mr. Andrews — stern-eyed, impatient, at times vaguely angelic and at times Children of the Corn terrifying — who is already beginning to challenge those who take their Bible seriously.

“It would be difficult for anyone who has any relationship with God and the Scripture to say this is O.K.,” said Chris Stone, a marketing consultant. His company, Faith Driven Consumer, helps to connect products, including movies, with observant Christians. The company was rebuffed, Mr. Stone said by way of disclosure, when it sought to become an adviser to the film, which he has not seen.

But Deadline Hollywood finds the studio’s religious-outreach shill to make their case:

“There’s not one homogeneous evangelical crowd, so people are going to be all over the place (with their opinions). For a lot of Christian audiences, Exodus is another stop along the journey of religious discovery and faith engagement. Exodus isn’t expected to define their (Christian) faith, but it’s a tool that they will agree with strongly or disagree with strongly.”

Mitchell points out that even Cecil B. DeMille’s 1956 classic The Ten Commandments took liberties with the Old Testament, filling in narrative gaps, and that film hasn’t suffered over time from the religious establishment.

“I think people are going to approach Exodus individually, taking a piece of Moses that resonates with them.”

It strains credulity that Christian or Jewish audiences would flock to a film where God is portrayed as a scary brat.