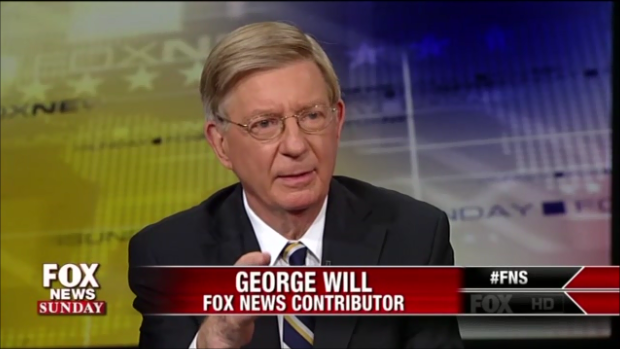 USA Today’s website is carrying a report that “controversial” and “conservative” columnist George Will is drawing protests after being selected as a commencement speaker at Michigan State University. But the protesters aren’t leftists, they’re “advocates for sexual assault survivors.” They aren’t protesting another speaker, unlabeled “filmmaker Michael Moore,” despite his rape-charge scraps with leftists over Julian Assange.

Louise Knott Ahern of the Lansing State Journal began: “The selection of conservative journalist George Will as one of the speakers at this weekend's Michigan State University commencement has angered advocates for sexual assault survivors because of the syndicated columnist's controversial statements about rape.”

In October, Scripps College disinvited Will from speaking over the rape issue -- for a program meant to bring some conservative counterpoint to campus.

Facing the growing criticism, MSU President Lou Anna Simon issued a statement Tuesday afternoon defending the choice of Will as speaker and explained — among other things — he was selected before he wrote the controversial June column.

"Having George Will speak at commencement does not mean I or Michigan State University agree with or endorse the statements he made in his June 6 column or any particular column he has written," Simon wrote. "It does not mean the university wishes to cause survivors of sexual assault distress. And it does not mean we are backing away from our commitment to continuously improving our response to sexual assault. What it does mean is this: Great universities are committed to serving the public good by creating space for discourse and exchange of ideas, though that exchange may be uncomfortable and will sometimes challenge values and beliefs."

The leftist faculty and students were livid:

"I am concerned, as are other faculty, that bringing an individual to our campus that has publicly invalidated and dismissed the traumatic experiences that some of our graduates have had sends an inaccurate message to our students," Nawyn said in an email. "Will is not just giving a speech; he is part of one of the biggest days of our graduates' lives, and I want that day to include messages that the Spartan community respects and treasures all of our students."

Organizers of the events say Will — a Washington Post columnist who briefly taught at MSU in the 1970s — has a history of inflammatory statements discrediting the severity of college rape.

Most notably, Will wrote a column last summer in which he suggested female college students who report sexual assault have a "coveted status" that brings "privileges" on campus.

"It makes me really, really sad to call myself a Spartan, to even feel I belong to this institution," said Emily Kollaritsch, a senior and one of the organizers of Wednesday's rally. "He might have his opinion, but for the university to affiliate with him is another story. They are affiliating with a rape apologist."

MSU's Council of Graduate Students sent Simon a letter on Monday calling Will's selection "a direct contradiction to the very firm stance the university has recently proclaimed to actively address the problem of sexual assault..." The letter also asks the university to dedicate more resources to hiring sexual assault counselors on campus.

Will's column explained that the progressivism of most institutions of higher education was going to backfire under a wave of sexual-assault claims and advocacy, like at Swarthmore College, the liberal alma mater of Michael Dukakis.

Now the Obama administration is riding to the rescue of 'sexual assault' victims. It vows to excavate equities from the ambiguities of the hookup culture, this cocktail of hormones, alcohol and the faux sophistication of today’s prolonged adolescence of especially privileged young adults.

There's no mention of how national "rape advocates" were infuriated in 2010 by Michael Moore's denial of rape charges against radical Julian Assange.

On national television, filmmaker Michael Moore referred to serious allegations of rape as "hooey" — and then donated $20,000 to bail out the alleged rapist.

Now RAINN supporters are fighting back with a campaign to raise that amount — or more — to help survivors of sexual violence.

In his MSNBC appearance, Moore mischaracterized and dismissed the rape allegations against Wikileaks' founder Julian Assange. His "facts" about the allegations directly contradict the facts reported by the NY Times and many others. Michael Moore may be known for his political opinions, but this time, it's not about politics — it's about taking rape seriously.