Last week, the national media leapt on a Rolling Stone story about an alleged gang rape at the University of Virginia. The freelancer who wrote the story was appalled at the university’s lack of transparency. Now Washington Post media reporter Paul Farhi is wondering about the journalist’s lack of transparency. She’s declining to answer questions and warning about getting “sidetracked” by focusing on her professionalism.

The writer of a blockbuster Rolling Stone magazine story about an alleged gang rape at a University of Virginia fraternity has said that she was unable to contact or interview the men who supposedly perpetrated the crime.

In interviews with The Washington Post and Slate.com last week, writer Sabrina Rubin Erdely declined to answer repeated questions about the men’s response to an allegation by a female student named Jackie that they had sexually assaulted her at a U-Va. fraternity party in 2012.

However, in a podcast interview with Slate, Erdely indicated that she was unable to locate the fraternity brothers in the course of her reporting to get their side of the story.

“I reached out to [the accused] in multiple ways,” Erdely said in the Slate interview. “They were kind of hard to get in touch with because [the fraternity’s] contact page was pretty outdated. But I wound up speaking . . . I wound up getting in touch with their local president, who sent me an e-mail, and then I talked with their sort of, their national guy, who’s kind of their national crisis manager. They were both helpful in their own way, I guess.”

However, he said, “we verified their existence,” in part by talking to Jackie’s friends. “I’m satisfied that these guys exist and are real. We knew who they were.”

News organizations typically seek comment from those accused of criminal acts or from their attorneys as a matter of fairness and balance, as well as to confirm that the individuals exist.

Erdely’s Nov. 19 article, which touched off a criminal investigation and an outraged reaction among the school’s students, faculty and alumni, included no such response and gave no indication that she had met or seen the men, who Jackie said were still on campus.

In today’s liberal media, highly sensitive to an alleged “rape culture” on college campuses, the accused are presumed guilty until proven innocent. The story of a three-hour gang rape is horrific, but it also makes it difficult to challenge the story without being painted as part of the “rape culture.”

The Post headline on the front of Tuesday’s Style section was “Writer didn’t get the other side in U-Va. rape story.” This, on one level, is utterly unsurprising: Rolling Stone routinely writes on politics and the culture with a very one-sided leftist point of view. But the sensitivity of these allegations and their potential to ruin reputations does demand a higher standard. Erdely wasn’t being transparent: 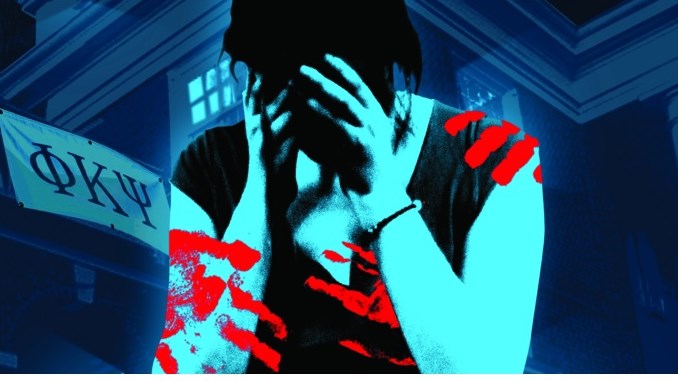 Erdely declined to address specific questions about her reporting when contacted on Sunday and Monday.

“I could address many of [the questions] individually . . . but by dwelling on this, you’re getting sidetracked,” she wrote in an e-mail response to The Post’s inquiry. “As I’ve already told you, the gang-rape scene that leads the story is the alarming account that Jackie — a person whom I found to be credible — told to me, told her friends, and importantly, what she told the UVA administration, which chose not to act on her allegations in any way — i.e., the overarching point of the article. THAT is the story: the culture that greeted her and so many other UVA women I interviewed, who came forward with allegations, only to be met with indifference.”

She added, “I think I did my due diligence in reporting this story; RS’s excellent editors, fact-checkers, and lawyers all agreed.”

Woods said that the men were not named in the story because “we were telling Jackie’s story. It’s her story.”

But just because it’s “her story” and she’s traumatized by an assault doesn’t mean it’s complete.
This isn’t the first front-of-Style Post story on this article. Farhi wrote a more promotional story on Erdely’s “explosive” story on November 28 that briefly touched on where the story wasn’t complete:

Erdely spent weeks corroborating details of Jackie’s account, including such minutiae as her work as a lifeguard. She concluded: “I find her completely credible. It’s impossible to know for certain what happened in that room, because I wasn’t in it. But I certainly believe that she described an experience that was in-cred-ibly traumatic to her.”

Some elements of the story, however, are apparently too delicate for Erdely to talk about now. She won’t say, for example, whether she knows the names of Jackie’s alleged attackers or whether in her reporting she approached “Drew,” the alleged ringleader, for comment. She is bound to silence about those details, she said, by an agreement with Jackie, who “is very fearful of these men, in particular Drew. . . . She now considers herself an empty shell. So when it comes down to identifying them, she has a very hard time with that.”

The story does take one journalistic shortcut. The alleged assault, described in graphic detail, is presented largely without traditional qualifiers, such as “according to Jackie” or “allegedly.” The absence of such attribution or qualification leaves the impression that the events in question are undisputed facts, rather than accusations. Erdely said, however, that her writing style makes it clear that the events are being told from Jackie’s point of view.

The story's subheadline also used the "undisputed facts" approach: "Jackie was just starting her freshman year at the University of Virginia when she was brutally assaulted by seven men at a frat party. When she tried to hold them accountable, a whole new kind of abuse began".

Erdely also worked in a political bias in choosing U-VA as her target, mocking the school because it doesn’t have a radical-feminist reputation like the Ivy League:

From reading headlines today, one might think colleges have suddenly become hotbeds of protest by celebrated anti-rape activists. But like most colleges across America, genteel University of Virginia has no radical feminist culture seeking to upend the patriarchy. There are no red-tape-wearing protests like at Harvard, no "sex-positive" clubs promoting the female orgasm like at Yale, no mattress-hauling performance artists like at Columbia, and certainly no SlutWalks. UVA isn't an edgy or progressive campus by any stretch. The pinnacle of its polite activism is its annual Take Back the Night vigil, which on this campus of 21,000 students attracts an audience of less than 500 souls. But the dearth of attention isn't because rape doesn't happen in Charlottesville. It's because at UVA, rapes are kept quiet, both by students – who brush off sexual assaults as regrettable but inevitable casualties of their cherished party culture – and by an administration that critics say is less concerned with protecting students than it is with protecting its own reputation from scandal. Some UVA women, so sickened by the university's culture of hidden sexual violence, have taken to calling it "UVrApe."

Speaking of mocking rape allegations, Rolling Stone can always go back to its Clinton impeachment coverage. So much for investigating powerful men: "The publishing of the Starr report on the Internet is the defining moment at the end of the twentieth century, like the papparazzi flies around the body of a princess, like a video-game war, like O.J.'s trial by television. Except this time, it's America in the dock."