Kyle Drennen noted that EPA chief Gina McCarthy appeared on MSNBC on Thursday so Andrea Mitchell could ask how she was going to deal with "climate deniers" as Team Obama pushes for rigid limits on carbon emissions. At least Mitchell read a statement from GOP Sen. Jim Inhofe calling the Obama deal with China a "non-binding charade."

On Thursday morning's New Day on CNN, host Chris Cuomo opened with a wiffle ball, mocking Senator Inhofe's 2012 interview with a Christian radio station (acting like a DNC-Think Progress publicist). Chris would launder that through The New York Times. 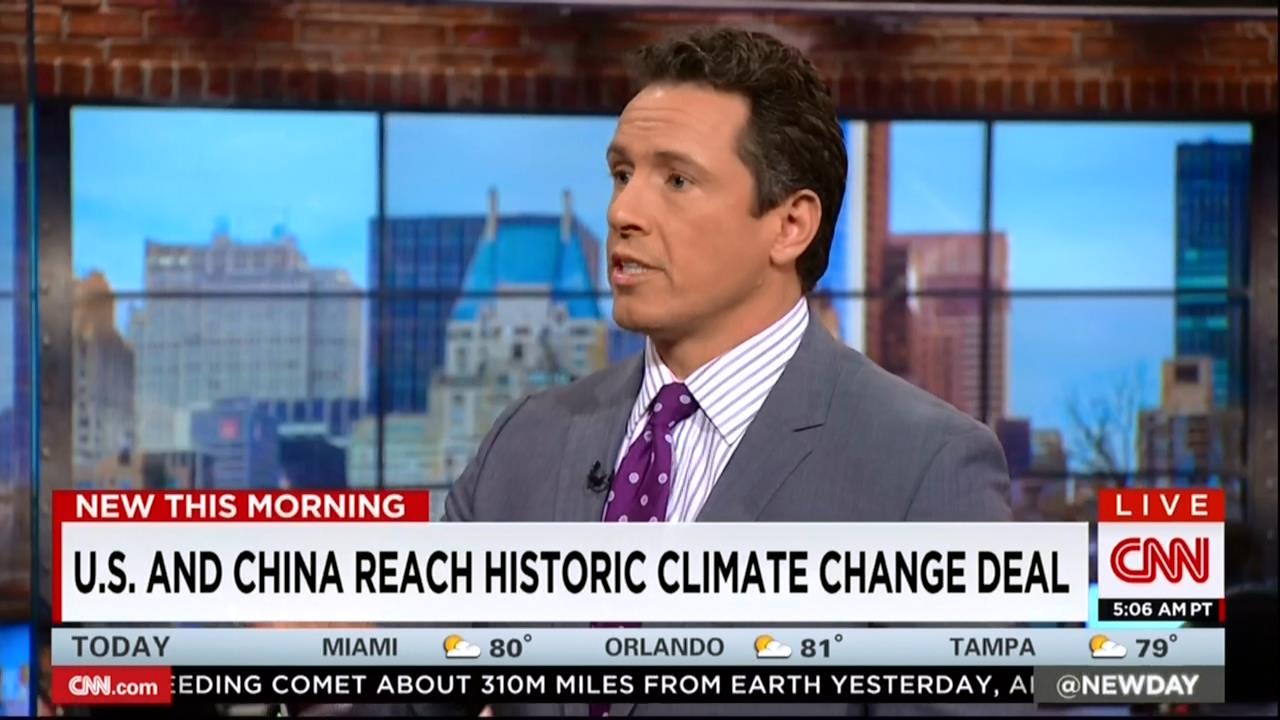 CHRIS CUOMO: I want to talk to you about the deal, and we're going to talk about the China aspect. But they're not really your first problem, are they? You have a senator who is likely to take over as chair of the Senate Environment and Public Works Committee, Senator Inhofe, who believes climate change is a hoax and who just said if God wants the place to be hot, who are we to stop it? How do you get past that to climate change?

GINA McCARTHY: I think the EPA is going to do what it's always done, which is focus on science and the facts. This isn't a belief system. This is about science, and we know our kids are at risk. We know our public health is at risk. And even more importantly at this stage, we know that there are affordable, reasonable, effective steps that we can take that will address this risk and continue to grow the economy and grow jobs.

CUOMO: But even if you get around the Senator Inhofe problem, which is that it's a hoax and that God doesn't want us to do this, then you get to the Senate majority leader. I know the president doesn't need the Senate to pass this deal. However, Mitch McConnell saying economically this will kill us and I'm not going to let it happen. Now what?

McCARTHY: He just needs to look at the facts again. We are working with the president so that we utilize the executive authority that he has been given to actually make the kind of reductions we need to make to keep our kids safe and to move towards a clean energy future, which is really going to provide investment, not cost, needed investment in the market here in the U.S. to maintain our competitive edge and to keep our economy strong. This is not about taxing the economy. It's about supporting it, and that's an important thing to keep in mind.

Cuomo and I had a Twitter exchange on the opening softballs:

@TimJGraham "God wants the world to be hot" =wacky response. I tested the deal several different ways. no one gets a pass from me on @newday

Cuomo did briefly push with a little skepticism: “Is it fair criticism of this deal that you're not really pushing China anywhere near as hard as it's going to push the U.S. in terms of what changes to be made, that they really don't have to do anything until 2030.” She claimed that prediction was all wrong: “I think that's an incorrect way of looking at it. I disagree totally with that.”

Like Daily Rundown host Chuck Todd before him, Cuomo didn't ask McCarthy how her push to impose limits on emissions have played very badly in energy-producing states like West Virginia and Louisiana, leading to Democrats losing their seats. I asked Cuomo if he's put on a climate-change skeptic. No reply.

CNN found that same liberal line on Wednesday’s New Day from ex-Time reporter Aparasim "Bobby" Ghosh, now with the website Quartz. Ghosh claimed China is the responsible partner that is rock-solid on this climate-change deal, and it’s America (with its apparently contentious and troublesome democratic elements) that might be unreliable:

ALISYN CAMEROTA: Republicans say it's a raw deal because China is making baby steps while the U.S. is making grander steps. How do you see it?

BOBBY GHOSH: The good news is China is going to keep to those targets regardless of what the U.S. does because for months now we've been hearing China independently of this deal has been aiming toward some of those targets. They've been wanting to cap their emissions they've been wanting a better mix of different kinds of power generation, not simply depending heavily on coal. So this is in their interests. They've decided it's in their interests to increase the amount of power generation from non-fossil fuels, and that's good for the rest of the world. Whether the U.S. is going to --

CAMEROTA: They don't have to do anything, Bobby, until 2030.

BOBBY GHOSH: That's just according to this treaty. There are plenty of people, analysts who look at China's power situation and have been predicting actually that they will reach that peak sooner, maybe even 2020 or 2025. So independent of American politics, this is a direction China is going. So this deal from China's point of view is simply confirming what they've already planned.

The bigger leap in faith has been and taken here by President Obama. And as we've seen, even before the ink is dry on this deal, he's already getting pushback. So there is room for skepticism that the U.S. will keep up its side of the bargain. The Chinese side I think is already baked in.