"Why are we hiding from this story?" he asked himself, according to People’s Liz O’Neil. "There's nothing to fear here. It's a human story. It's a heroic story.” Heroically lobotomized and institutionalized? Apparently, this fiasco was “the true inspiration for his famous family’s love of service.”

Or she was the “secret shame” that showed how she would be (and could be) hidden from the public by the Kennedy family and their cooperative liberal media myth-makers.

As People explained, “The third of Joseph P. Kennedy and Rose’s children, Rosemary was born mentally disabled in 1918 and after undergoing a botched lobotomy at age 23, was hidden from public view and cared for by nuns in a Wisconsin Catholic institution until her death at 2005 at age 86.”

This is how Shriver described the lobotomy:

The procedure itself was chilling. The surgeons inserted an instrument shaped like a butter knife into the skull. Then they swung the knife up and down, severing the frontal lobe’s connection to the rest of the brain.

Patients were kept mostly conscious during the operation, so the surgeons could gauge how deeply to cut based on the patient’s ability to answer questions. When a patient’s responses became disoriented and incoherent, they normally stopped cutting. The outcome, in Rosemary’s case, was devastating.

After a few weeks, it became apparent that she had been robbed of her speech and of significant cognitive capacity. She became severely limited in her ability to process and recall information. Her mobility was damaged. She lost her independence for the rest of her life. 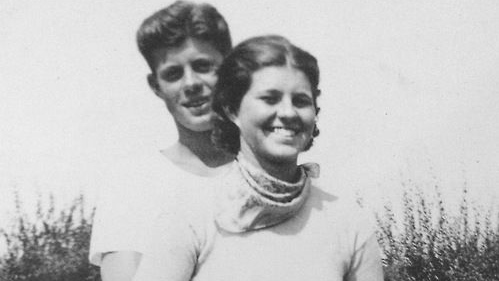 So she was hidden from the public:

Stoic but shattered by the results of his decision, he [Joe Kennedy Sr.] would never visit her there or – as far as I can tell – see her for the rest of his life. For years, her siblings did not even know what had happened to her. Members of her family were in such a flurry of activity and grieving other losses at the time that they apparently never questioned one sister’s absence until much later. The code of secrecy kicked in and Rosemary disappeared.

Shriver’s really spinning here. Joseph P. Kennedy Jr. was killed in action in 1944, three years after the lobotomy, and Kathleen Kennedy was killed in a plane crash in 1948. But the better explanation for the cone of silence was Papa Kennedy’s interest in running for president, and if that wasn’t viable, working on his sons being elected. (John F. Kennedy was first elected to the House in 1946.)

The family did not even admit Rosemary was institutionalized until after JFK was elected in 1961. The liberal media are always willing to help Democrats negotiate those “rough patches” like lobotomizing a presidential sibling.

The pull quote in People was Shriver claiming "My mother [Eunice Kennedy Shriver, Rosemary's sister] was furious that people were so mean and indifferent and sort of dismissive about her sister." But who was more indifferent and dismissive than the whole Kennedy clan, who refused to visit Rosemary for many years?

Online at People.com, Shriver's pro-Kennedy spin was worse than what was excerpted in the magazine: "I don't know how other than just from sheer devastation he [Joe Sr.] could allow her to disappear so much from his life," Shriver says. "He had to be destroyed by it. That's the only way I can explain it. It's an incredibly heartbreaking story of a dad trying to help his daughter and hurting her. What could be worse?"

Maybe her father was an ambitious monster? That spin is apparently not allowed.