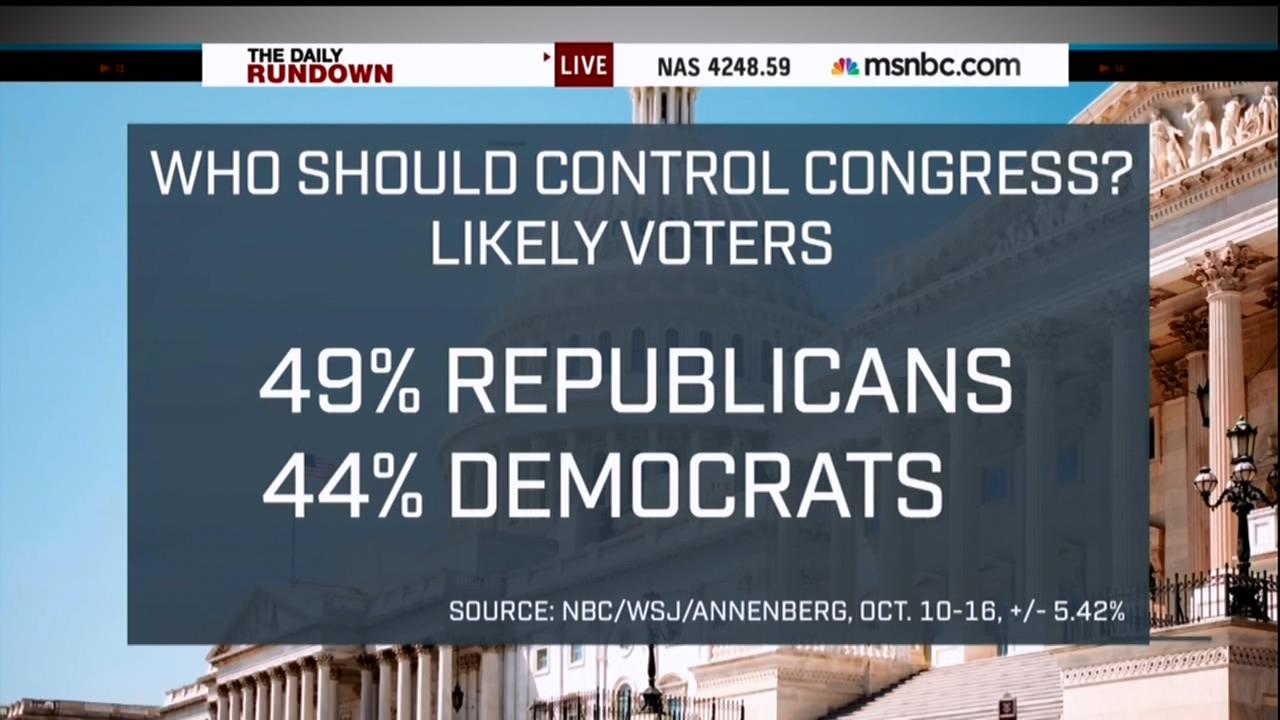 Jeffrey Meyer noted earlier that Meet the Press host Chuck Todd announced on Sunday morning that the latest NBC News-Wall Street Journal-Annenberg weekly tracking survey found “the biggest lead we've reported yet for generically for the Republicans,” 49 to 44 percent among likely voters (and 45-43 among registered voters). “Here's what I can tell you. All Democrats agree, it was a bad week for them,” Todd said.

But Sunday’s NBC Nightly News and Monday’s Today couldn’t locate that poll, much like they’ve avoided other NBC News polls that look bad for Democrats.

The numbers came up on MSNBC Monday on Morning Joe and on The Daily Rundown, where host Craig Melvin announced them alongside the curious news that Democrats are leading by ten points among low-information voters. (Is that encouraging?)

A Nexis database search reveals the only October mention of “NBC News” in the same sentence as “poll” on the morning and evening newscasts came on Friday's Today, in a brief 54-minute discussion:

TAMRON HALL: We are now less than three weeks from the midterm elections. And with that in mind, NBC News and The Wall Street Journal are out with a new poll about voter attitude. Chuck Todd is NBC's political director and, of course, moderator of Meet the Press. So, Chuck, what have we learned at this point?

CHUCK TODD: Well, Tamron, it`s a very cranky electorate out there. The President's job rating 42 percent that's near his all-time low. But look at the disapproval rating for Congress sitting at 83 percent; that ties an all-time high in disapproval. And the question is which party is going to benefit. Republicans appear to have momentum, but when you look at the favorable ratings of the Democrats and the Republicans, it`s actually Republicans that have a higher negative rating than the Democrats. And this seems to be, Tamron, the sort of the unknown here. Voters want to punish Washington, maybe they're mad at President Obama, but they're not ready to reward the Republicans. And that`s what make this is Election Day a-- a bit more of a coin flip than it should be.