Ira Stoll at Smartertimes.com reports that “For the price of $6,995, the New York Times is offering 13-day tours of Iran guided by Times journalist Elaine Sciolino.” It’s a pretty hard sell, but the Times website tries to sell Tehran as a party town with “joie de vivre.”

Tehran is an interesting fusion of old meeting new; conservative elders uphold the traditions of the illustrious Persian past while the young and fashionable adopt a new trendy joie de vivre. The city itself may be a little on the dusty and ugly side but it’s the grit that gives it flavor and even color.

So that’s what the ayatollahs do, “uphold the illustrious Persian past”? There may be no funnier sentence than “sure, Tehran is ugly, but the grit is so colorful.” The Times even promises great insights into the “accomplishments” of Ayatollah Khomeini: 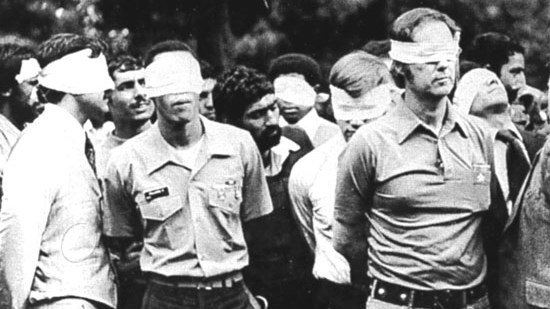 The tour will also pass through the towns of Dorud and Aligudarz before arriving in Khomein and the family residence of Ex-Iranian religious leader and politician Ruhllah Khomeini. The tour expert will offer excellent insights into his life and accomplishments.

One can obviously sense that the Times, forever hostile to the American booboisie that’s “Islamophobic” and loathes the Iranians for taking our Americans hostage (not to mention blowing up so many American soldiers in Iraq). Only the Times can offer that “nuanced” take that Ayatollah Khomeini had “accomplishments” most Americans aren’t smart enough to understand. Hostage-taking? Building a nuclear bomb? Shooting dissidents in the street? That's just part of a "complicated timeline," they insist:

Journey 2,500 years back in time to discover the ancient secrets of Persia on this 13-day itinerary incorporating some of most well preserved archaeological sites in the world. Welcome to the once-forbidden land of Iran. Journey with on-the-ground experts who will help untangle this nation’s complicated timeline.

Sciolino, the "on-the-ground expert," is sold as someone who flew with Khomeini back into Tehran from exile and covered the hostage crisis. In 2004, she prematurely mourned the death of Palestinian terrorist leader Yasser Arafat. Brent Bozell wrote she never used the T-word: instead, Sciolino referred to Arafat as a cult hero, "the guerrilla fighter and Nobel [ahem, "Peace"?] Prize winner who has symbolized the Palestinian struggle for statehood for four decades." Of his potential Muslim extremist successors, Sciolino warned they had "little of the street credibility and aura that surrounded Mr. Arafat."

Then there’s the obvious question if American tourists will be safe. Stoll noted:

The State Department, however, warns: "Some elements in Iran remain hostile to the United States. As a result, U.S. citizens may be subject to harassment or arrest while traveling or residing in Iran...The U.S. government does not have diplomatic or consular relations with the Islamic Republic of Iran and therefore cannot provide protection or routine consular services to U.S. citizens in Iran."

Travelers dissatisfied with their experience on the trip may have a tough time if they try to sue. The "terms and conditions" for the trip include a "binding arbitration clause" that gives arbitrators, "not any federal, state, or local court or agency," "exclusive authority to resolve any dispute" related to the trip. A 2010 New York Times editorial described such binding arbitration clauses as "pretty unfair" and advised readers to "beware" them. 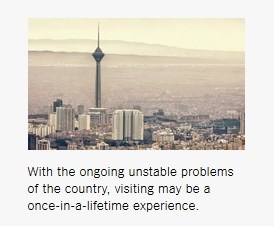 It ought to concern potential travelers that the Times insists “We assume no responsibility for any personal injury, property damage or other loss, accident, delay, inconvenience or irregularity which may be occasioned by reason of any matter beyond our exclusive control including but not limited to a delay or cancellation that causes you to miss all or any portion of the Tour, acts of God, acts of government, war, terrorist acts, riots, disaster, weather extremes or strikes.”

The Times actually promotes the trip with this sentence: "With the ongoing unstable problems of the country, visiting may be once-in-a-lifetime experience."

There's no mention at all in the Times promotional language about the tour of Iran's status as a state supporter of terrorism, of its pursuit of nuclear weapons, or of its human rights abuses. For information about those abuses, anyone considering plunking down nearly $7,000 for the pleasure of accompanying a Times journalist on a "relaxing evening and dinner" after antique shopping in Iran may want to consider, first, browsing the State Department's latest human rights report on Iran. It reports that under Iranian law, "a woman who appears in public without an appropriate headscarf (hijab) may be sentenced to lashings and fined." It also says that "The law criminalizes consensual same-sex sexual activity, which may be punishable by death or flogging."

One can understand why the Times is seeking new revenue opportunities as a tour operator, since its revenues in traditional areas such as newspaper subscriptions and advertising are not growing fast enough to satisfy investors. But there is potential for this sort of thing to adversely affect the Times' journalism. How fair will Times journalism be toward those calling for tougher Iran sanctions if the sanctions would force the newspaper to cancel its lucrative luxury tours of Iran? Why are Times journalists lending their reputations, such as they are, to promotional material that describes Iran as a kind of paradise — "colorful bazaars," "trendy joie de vivre" — while skipping over the reality of other parts of Iran, like, say, Evin Prison?