Another Sunday LGBT Sermon from the WashPost: 'When No Gender Fits'

The Washington Post has made it clear that Sunday is not the Lord’s Day. It’s the best day for LGBT preaching. In 2012, they splashed across the front page “TRANSGENDER AT FIVE.” In this Sunday edition, it’s an 18-year-old girl: “WHEN NO GENDER FITS.”

As usual, “the world” is having trouble sympathetically understanding girls who don’t want to be their “assigned” gender. Over a large color photograph of the girl in question tying her own necktie are the words “The world insists, in a host of way, that Kelsey Beckham choose: Male or female? But what feels most right to Kelsey is neither.” 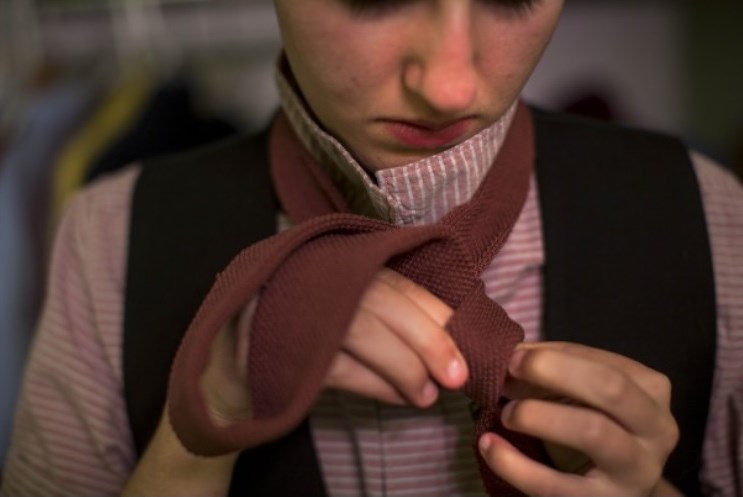 The Post goes all out when it has lessons to teach: splashed across the front page, and then two whole pages inside, with eight color pictures taking up everything above the fold, with the words inside (in caps): “A QUEST TO BE JUST A PERSON.”

There is no space -- none -- for any dissent from the LGBT hard line.

Post reporter Monica Hesse is a reporter who can be expected to lend a sympathetic voice to this subject. After a 2009 profile of traditional-marriage defender Brian Brown (who dared to describe him as having “sanity”) drew intense hatred from gay advocates, Hesse defended herself by saying she was bisexual.

Our “agender” poster girl is first spotted shopping for T-shirts at Five Below (everything costing five dollars or less), which is hardly a great starting spot for gender revolutionaries. But that ably sets up the preaching:

What Kelsey Beckham really wants is a shirt that communicates something very specific about its wearer. Not about gayness, or anything to do with sexual orientation, but about gender. A shirt that says the wearer is something many people aren’t familiar with: Not a he. Not a she. Not a male transitioning to a female, or a female transitioning to a male. A shirt explaining that Kelsey, 18, doesn’t identify with any gender at all.

Kelsey’s gender identity is “non-binary.” Or, “agender.” It’s what Kelsey feels comfortable with, even though the world keeps insisting, in a million little ways, that Kelsey has to choose. Like the OkCupid profile some friends are always suggesting Kelsey create online. When Kelsey looked at the matchmaking site’s opening screen, it presented an immediate problem: “I am a [male/female].”

Which box do you check when you don’t belong in any box? How do you navigate the world when the world is built on identifying with one group or another group, male or female, and the place that feels most right to you is neither?

A few months earlier, someone started a petition on the White House Web site asking the government to recognize non-binary genders, and Kelsey signed it, petitioner number 22,711 out of an eventual 103,000.

A month before that, Facebook started allowing users to customize their gender settings, and Kelsey customized them, selecting “Agender,” “Non-binary” and “Transgender” from a list of more than 40 choices.

But “the world” or “the country” – or to be (vaguely) specific, “this conservative part of western Michigan” although they mention Kelsey meeting a like-minded girl at a Muskegon County amusement park – is too thick in the head to understand. It doesn’t help that people study the Bible there:

The country was having discussions about gender, but they were happening abstractly, far away from where Kelsey lives — where Bible study groups meet in the Panera and a deli advertises outdoor movies by offering half-price admission to anyone who drives in on a tractor. In Kelsey’s school, where there are no gay-straight organizations, people whisperingly speculate that Kelsey and Kahri might be dating because they both have short hair. They aren’t, but how do you explain “non-binary” to a school where one class included a segment on “gendered spending” and the teacher joked that girls would have to budget for all the shoes they like to buy?

Summer will come, and by the time Kelsey leaves for college this fall, Kelsey doesn’t want to be a “she.” Kelsey wants to use the pronoun that feels right:

Kelsey went searching online for ways to understand these feelings, eventually stumbling upon resources on gender identity. Here, on blogs containing photographs of smooth-bodied androgynous individuals, Kelsey first learned the term “non-binary” and felt relief. These were other people who knew Kelsey’s experiences, who lived with them and named them. They’d developed lexicons — instead of the pronouns “he” and “she,” there were others to choose from, representing neutrality: Ze. Xe. Ou. Ey. And, “They,” which Kelsey liked because it already existed in the dictionary.

This only gets a little pushback from Kelsey’s mother Nancy in the very last column of the story:

Now, in the car, back on the country roads, Nancy articulates what bothers her about “they.”

“Using ‘they’ just seems like such an impersonal thing,” Nancy says. She explains that “they” seems like a placeholder, for when you don’t know anything about the person in question.

She glances at her child, who is searching for the right words.

“But if you know the person,” Kelsey says finally, “Then it’s not impersonal at all.” [Italics in the original.]

They stop at an “LGBT pride festival” on the way to college. “Kelsey and Nancy walk to the entrance and Nancy buys admission tickets. She notices Kelsey is wearing a new T-shirt, with a striped band across the chest: lavender, white and chartreuse. It’s the flag representing non-binary gender, Kelsey explains. It’s the T-shirt explaining Kelsey is not a boy or a girl. Kelsey bought in online.”

When Kelsey goes to college, the Post can’t be specific about which college it is, either -- except that it's "nearby" -- and yet it is painted by Hesse as a marvelously cosmopolitan place with no psychically damaging “preconceptions” about a rigid gender binary:

Everything about this place makes Kelsey feel hopeful. One university form Kelsey filled out had three gender options, not two: Male. Female. Other. “Other” had a blank next to it. Kelsey wrote in “Non-binary,” finally able to fit gender identity in an official box.

Now, in the dorm, Kelsey and Nancy begin to unpack. Kelsey asks for Nancy’s help with the fitted sheets on the lofted bed. Nancy asks whether Kelsey wants a ride to the credit union. Into a set of drawers, Kelsey tucks a cartoon-illustrated guide called “The Gender Book,” brought along to help explain gender variations to new friends.

And then, suddenly, there’s nothing more to do, in this place where Kelsey is just Kelsey, with no past, no gender, no preconceptions.