During a Senate Judiciary Committee hearing, the CEO’s from both Facebook and Twitter agreed that reforms to Section 230 of the Communications Decency Act is a necessary step forward for social media platforms.

“Do both of you support change to 230 – reform of Section 230?” Sen. Lindsey Graham (R-SC) asked Zuckerberg and Dorsey. They both agreed without hesitancy.

“I’m glad to hear both of our witnesses today say that Section 230, that they are open to reform. Because I think it's fair to say the internet has outgrown Section 230,” Sen. John Cornyn (R-TX) said.

“I think the question is going to be how this regulation is going to come to pass. I know there’s some, including on this committee, who suggest that maybe we ought to create a private right of action so that individuals can sue over claims of violated rights on your platforms,” Cornyn went on. “I think that’s one form of regulation. It’s called regulation by litigation, but it’s certainly not my first choice. And it's not optimal. And I don’t think it's something we ought to be embracing in the first instance. But I do think it's critical that each of you and your counterparts work with us to try to come up with something that will address the concerns.”

Cornyn said that it is as problematic to allow private social media companies, “which are now de-facto public forums,” to regulate speech as it is for the government to do so.

“Louis Brandeis famously said that the solution for bad speech is not less speech, it’s more speech.” Cornyn said. “And it seems to me like the practices that you are engaging in to tag, remove and otherwise censor speech on your platforms violates that principle. And I’d like to know why that shouldn’t be a better approach by allowing more speech rather than censoring what is perceived as bad speech.” 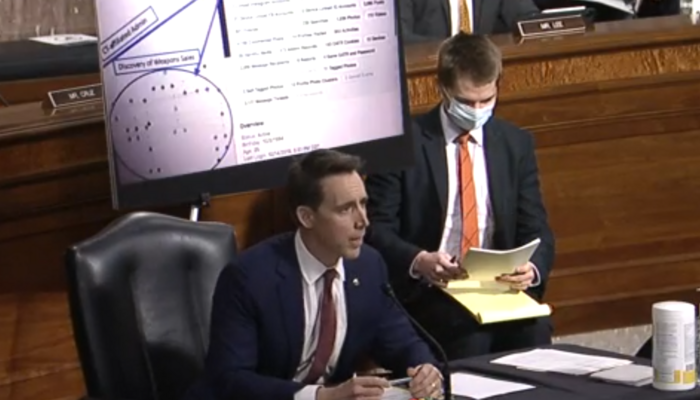