Fast food protests are all about the regular people, so long as you ignore the massive donors and organizers.

After hundreds of fast food workers in cities across the country abandoned their jobs Sept. 4, to demand raises of more than 100 percent and the right to unionize, all three broadcast networks dutifully reported on the protests, but failed to point out the union that had organized the protests. 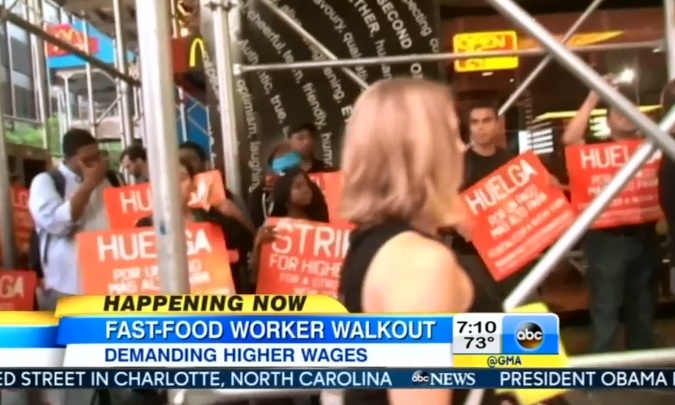 Think Progress said that fast food workers in 159 cities went on strike on Sept. 4, demanding that the federal government force employers to more than double their wages, from $7.25 per hour to $15 per hour. Even President Barack Obama hasn’t gone that for in his calls for a minimum wage hike to $10.10 per hour.

That day, all three broadcast networks reported on the strikes, though ABC’s “World News” failed to mention them. During five stories on the morning and evening news shows, the networks covered union-backed demands for higher wages without mentioning unions. ABC’s Amy Robach described the protesters’ demands as calls for “a living wage.”

According to The New York Times, SEIU spent more than $10 million “underwriting the fast-food movement.” Its stated goal was to “change the nature of work,” but the broadcasts networks didn’t point out that connection in its reports about the protests on Sept. 4.

SEIU is a huge union that represents more than 1.5 million workers. It donates millions of dollars to liberal causes and is a member of the even larger union: -CIO. According to Open Secrets, the SEIU spent $48,103,305 on political spending to Democrats in the 2012 campaign, more than 3,800 times as much as they gave to Republicans ($12,493). The union is also known for its bullying and thuggery.

They also boosted the protests with non-fast food workers. As Steven Greenhouse reported for the Times, SEIU was firmly supporting these protests, and in fact “sought to add more protesters and decibels to the efforts on Thursday by getting home care aides to join the picket lines for the first time.”

In fact, the SEIU had high hopes for the fast food protests. In an interview with Democracy Now, SEIU president, Mary Kay Henry, declared “we have got to change the nature of work in this country” and pledged to “do whatever it takes to help them win.” Henry also connected these strikes to the goal of “get[ing] the Republican House to act on commonsense immigration reform,” again stating “we are not going to stop our movement building on immigrant justice or economic justice until we win.”

The protesters’ conduct was not as noble as the SEIU portrayed it. According to The Huffington Post, many of the workers were arrested for obstructing traffic, including protesters who ignored law enforcement calls to stop sitting in the middle of the road. In , police began running out of handcuffs after trying to disperse protesters from blocking the streets, according to WXYZ Detroit.

It is unsurprising that the networks would portray these efforts positively. When Obama campaigned for a higher minimum wage in January, the networks ignored conservative objections in 89 percent of January minimum wage stories.

Similarly, the networks ignored the SEIU connection to the fast food worker protests of December 2013 and the summer of 2013. Coverage of the December protests on ABC and CBS morning shows slanted in favor of protesters by a 2-to-1 margin at that time, and ignored the involvement of SEIU. Earlier that yer, the networks ignored the left-wing origins and supporters of the “living wage” crusade being repeated by labor unions and groups like Fast Food Forward.

Economists have warned that demands to double the minimum wage would likely backfire on these very protesters calling for them. In February 2014, the Congressional Budget Office found that a minimum wage hike to $10.10 per hour, like Obama wanted, would cost 500,000 jobs. This study confirmed the Cato Institute’s 2012 findings that minimum wages laws “[come] at the expense of lower skilled workers who are shut out of the labor market.” Cato also found that “consumers may also pay for [higher minimum wages] with higher prices.

Conservative economists agreed. According to The Heritage Foundation, “The problem with minimum-wage increases is that they reduce access to these entry-level jobs. It is a basic tenet of economics that when the price of something rises, people buy less of it. This is as true of businesses hiring unskilled workers as it is of Americans buying household goods. Heritage economist James Sherk finds that ‘two-thirds of all recent studies show that raising the minimum wage reduces jobs.’”