Appearing on The Cycle to discusses the rise of Trump, co-host Krystal Ball wondered what "it says about the Republican Party that this guy seems to have momentum?" Fineman, a former editor of Newsweek who is now with the Huffington Post, responded, "Even though Trump is getting in tremendous trouble financially and politically for his comments about Hispanics, that kind of xenophobic language sells in New Hampshire and Iowa."

Fineman's habit of painting conservatives as uninformed bigots isn't new. On July 23, 2012, he declared that Mitt Romney appealed to the "xenophobic," "nativist" GOP base.

On August 22, 2012, he lectured MSNBC viewers that that Republicans have become "Bible-based" and that Paul Ryan is "anti-science." On November 2, 2011, the journalist suggested that GOP candidates are "advertising their ignorance."

On September 8, 2011, Fineman appeared on Hardball to smear climate change skepticism, deriding, "It's part of their new Ten Commandments."

A partial transcript of the July 7 Cycle segment is below: 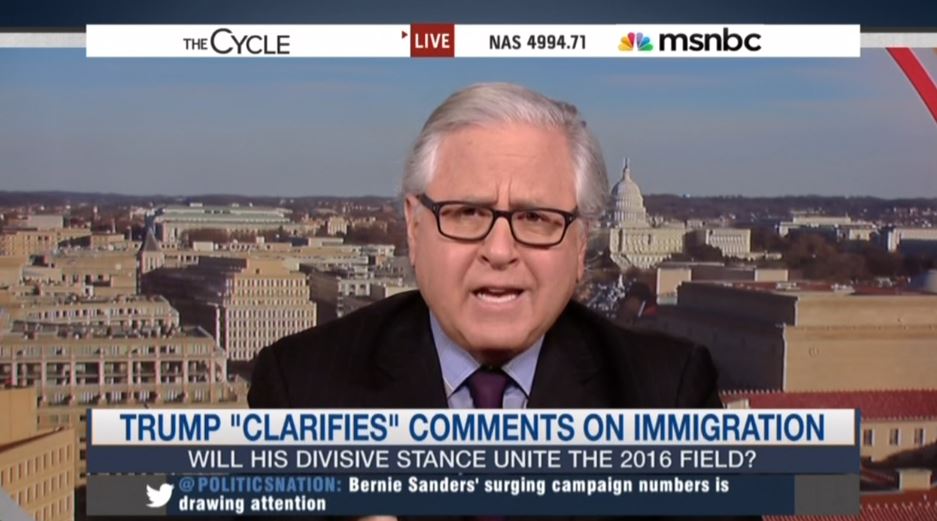 HOWARD FINEMAN: Well, it says that the Republican Party's an even bigger mess than the Democratic Party at this point.  You know, you don't have anybody with basically over 15 percent support. It's like the political equivalent of entropy. You know, there are no high temperatures or low temperatures. In that situation, Donald Trump, his showmanship, his aggression, his blunt speaking, you know, this is an election season where everybody says, "I want to be blunt. I want to be in your face." You know? Chris Christie, Mike Huckabee, on and on and on. Well, if that's the level of the contest, Donald Trump trumps them all. He's the most aggressive, the most obnoxious, the biggest showman, the most in your face. And that is enough to get him at least 10 or 12 percent, for sure. Now, I was in New Hampshire. I spoke to top Republicans there over the weekend, including Joe McQuaid, who is the legendary editor of the biggest newspaper in new Hampshire, down the line conservative. He's – Put it this way, he is not dismissing Donald Trump out of hand. And Even though Trump is getting in tremendous trouble financially and politically for his comments about Hispanics, that kind of xenophobic language sells in New Hampshire and Iowa.