Good Morning America on Tuesday covered the latest details of Hillary Clinton's scandals and her refusal to talk to the media. However, George Stephanopoulos, the man who gave $75,000 to the Clinton Foundation and who "loves" the Democrat, did not anchor the segment. Instead, co-host Robin Roberts explained, "The State Department announcing it may not release [Mrs. Clinton's] private e-mails from when she was Secretary of State until early next year."

As Stephanopoulos sat quietly next to her, Roberts added, "...The other big question seems to be, when Hillary Clinton will take questions from the press." Reporter Cecilia Vega mildly complained, "We tried to ask some questions... Twenty eight days, by our count, since she has taken a media question."

A dejected Vega continued, "She's got another event today. We're going to try again." The networks on Tuesday finally noticed Clinton's streak of avoiding the media. In addition to ABC, NBC's Tamron Hall noted "growing pressure" on the candidate.

However, Good Morning America failed to note a report by the New York Times which indicated that Clinton had more than one secret e-mail address.

Having Roberts host a political segment is a change for ABC. When Stephanopoulos joined GMA, Robin Roberts was quickly shut out from most serious policy stories.

A transcript of the May 19 segment, which aired at 7:07am ET, follows:

ROBIN ROBERTS: Now to the race for president and Hillary Clinton. The State Department announcing it may not release her private e-mails from when she was Secretary of State until early next year, just days before the Iowa caucus. ABC's Cecilia Vega is on the Clinton campaign trail and joins us now from Cedar Falls, Iowa. Good morning Cecilia. 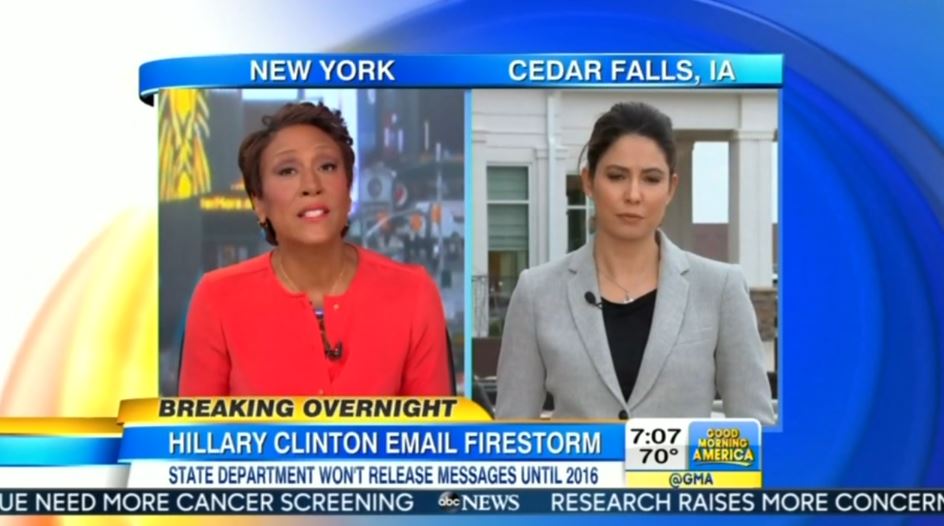 CECILIA VEGA: Robin good morning to you. These are those State Department e-mails that Hillary Clinton wrote from her personal e-mail account. You will remember the controversy that launched just as she was launching her presidential bid. Hillary Clinton saying she wanted these e-mails to be made public quickly, that she would release them from her private server. 50,000 pages of e-mails we’re talking about. Well the State Department now says that it may not release those e-mails until January 2016. That is just as you said a couple of weeks before the Iowa caucuses. That would be -- this is a key early voting state, one that Hillary Clinton wants to win. Really wants to win. She's campaigning hard out here Robin. You can bet the timing of this release will raise some serious questions out here on this campaign trail. 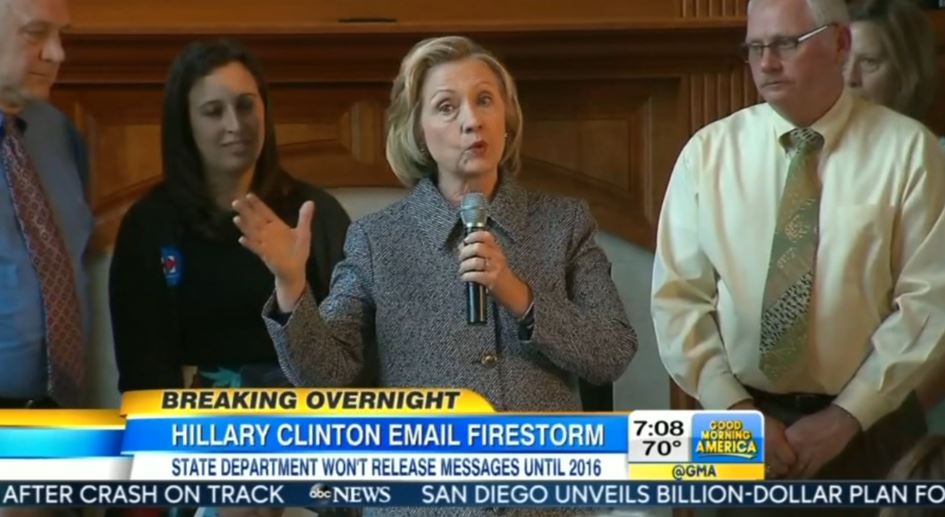 ROBERTS: And Cecilia, the other big question seems to be, when Hillary Clinton will take questions from the press.

VEGA: That's right. We saw her out here yesterday in Iowa. We tried to ask some questions. She just waved to us from afar. Twenty eight days, by our count, since she has taken a media question. Just nine questions so far Robin. Republicans having a field day with it. She’s got another event today. We’re going to try again Robin.

ROBERTS: You’ll be on the trail with her. Alright Cecilia thank you very much.