As Ramadi Falls to ISIS, Networks Skimp on Obama Responsibility

With the bleak news on Monday that Ramadi had fallen to the terrorist group ISIS, the three networks minimized an examination of Barack Obama's responsibility. Despite hyping the problems 2016 Republicans face in connection to Iraq, ABC, NBC and CBS were more reserved on the issue of ISIS. On CBS This Morning, Holly Williams allowed, "What is clear is that despite nine months of U.S. lead air strikes in Iraq, ISIS is still capable of seizing territory."

But the two hour-long program didn't focus on Obama. While talking to GOP Senator Lindsey Graham, Norah O'Donnell deemed Iraq a "problem" for Republicans. She lectured, "We heard Secretary Gates say to Bob Schieffer yesterday he's not really impressed by some of the foreign policy answers by some of the Republicans."

While talking to former Secretary of Defense Bob Gates, Norah O'Donnell mentioned the President's air strikes on ISIS. Gates asserted that this show "air strikes can certainly help, but they don't change the situation on the ground in a fundamental way." Gates wasn't pressed on the current President.

Over on ABC's Good Morning America, Terry Moran revealed that ISIS is "now rampaging through that city, executing hundreds and thousands more are fleeing." Regarding Obama, he pronounced, "All this really just undercuts the rosy statements in recent weeks from the White House and the Pentagon on how the war is going. It's going badly." 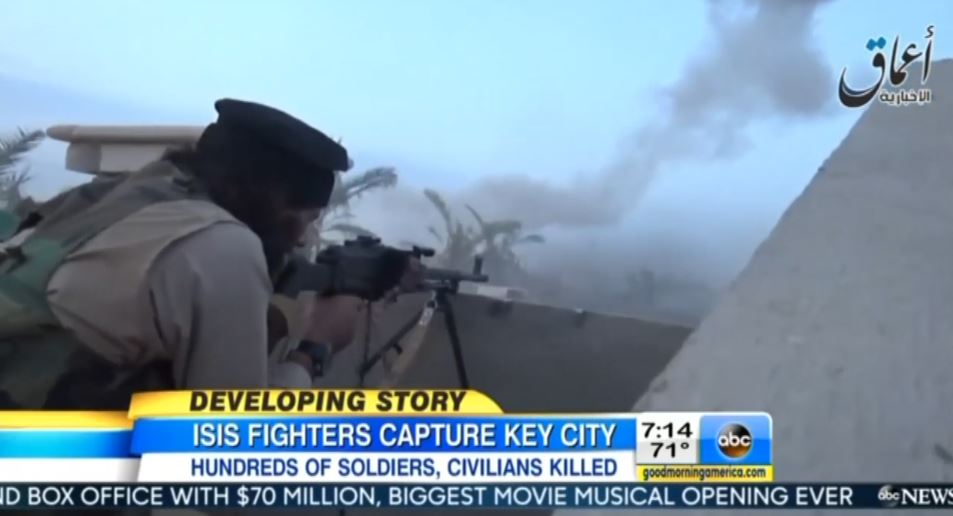 On NBC's Today, Keir Simmons conceded, "This is without question a blow for Baghdad and Washington." But that admission was it as Simmons moved on to White House talking points: "The Secretary of State insisting this morning ISIS remains on the defensive."

He then played a clip of Kerry putting a happy face on the situation: "It is possible to have the kind of attack we've seen in Ramadi, but I am absolutely confident in the days ahead that will be reversed."

Considering the continuing media interest in George W. Bush's decision to go into Iraq and the 2016 GOP field's opinion on the issue, it might also be helpful to focus on the President currently in power and his ability to make the situation better.

A transcript of the May 18 Today segment is below: 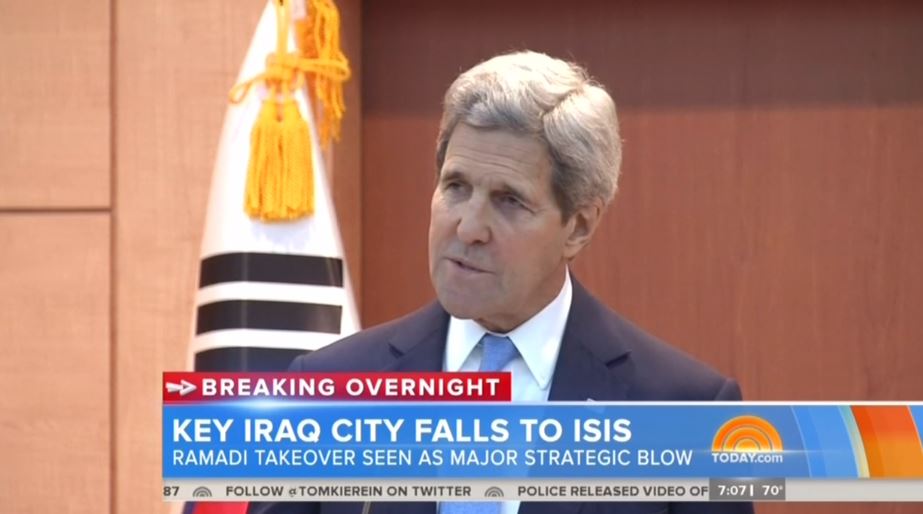 SAVANNAH GUTHRIE: Another big story the Pentagon is watching this morning. ISIS militants are now in control of the Iraqi city of Ramadi. That is just 60 miles west of Baghdad. One official saying the city has fallen. NBC's Keir Simmons has the latest for us. Keir, good morning to you.

KEIR SIMMONS: Savannah, good morning. This is without question a blow for Baghdad and Washington just days after its daring U.S. special forces raid killed an ISIS commander and captured his wife in Syria. A key Iraqi city has fallen to ISIS. And really appears to show parts of Ramadi abandoned by an Iraqi army that was supposed to be on the offensive. Iraqi security forces appeared to flee Ramadi, escaping the ISIS advance. Video, unverified by NBC News, shows Humvees packed with Iraqi military in full retreat, leaving a crucial city seeming deserted. A propaganda video released by an ISIS affiliate, Saturday, purports to show ISIS fighters walking Ramadi's empty streets. A hospital ransacked. Video also has intense fighting. The Secretary of State insisting this morning ISIS remains on the defensive.

JOHN KERRY: It is possible to have the kind of attack we've seen in Ramadi, but I am absolutely confident in the days ahead that will be reversed.

SIMMONS: There has been an intense air campaign to save Ramadi. A city just about 80 miles west of Baghdad. The U.S. Has sent weapons and is providing training.

MUHANNAD HAIMOUR: We're getting reports minute by minute. But we believe that around 500 people have been executed or died in battle.

KEIR SIMMONS: 8,000 have fled in recent days. Behind them, ISIS controls much of their city and the military base, packed with weapons. And Anbar is of course the region where so many Americans died during the Iraq war. But an Iraq official tells me he believes the city fell to an ISIS group numbering just hundreds. Meanwhile, thousands of Shia militia are said to be gathering to try to liberate the city, which is largely Sunni, Savannah.