In what would traditionally be considered a gaffe, Barack Obama on Tuesday attacked those who send their children to private schools and play at "private clubs." (The President does both.) On Wednesday, ABC, CBS and NBC avoided Obama's questionable comments, despite eight hours of available air time.

Yet, MSNBC's Joe Scarborough recognized the apparent hypocrisy and grilled White House spokesman Josh Earnest.  In a speech, Obama derided, "Kids start going to private schools. Kids start working out at private clubs instead of the public parks." Scarborough mocked the President: "Is this a self-critique against himself, mistakes he's made?" 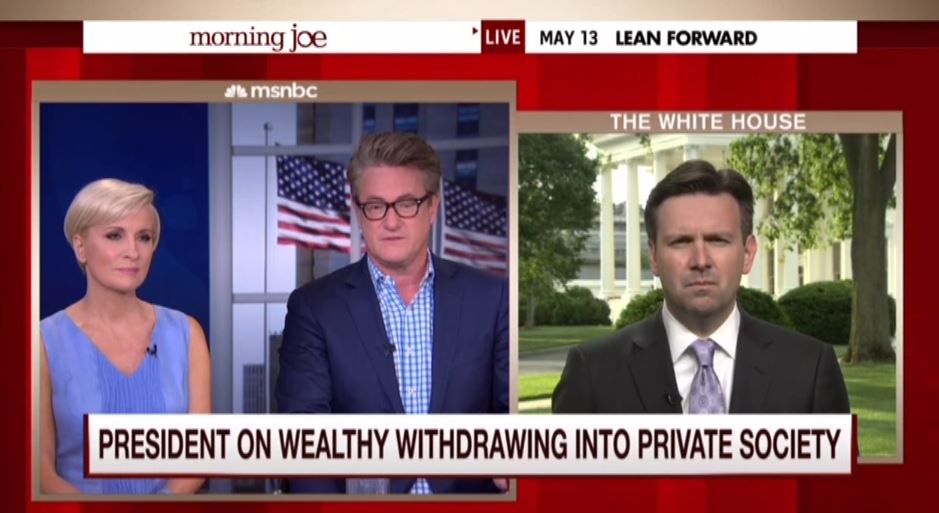 After Earnest dodged, Scarborough again pressed, "So did the President consider sending his children to public schools? Again, none of my business unless he is criticizing Americans who send their children to private schools."

What did the networks cover instead of Obama's gaffe? The Today show spent four minutes and 47 seconds on Snoop Dogg's new album. Good Morning America devoted five minutes to the latest on Dancing With the Stars. CBS This Morning offered four minutes and 50 seconds to Aerosmith singer Steven Tyler releasing a country album.

A partial transcript of the May 13 Morning Joe segment is below: 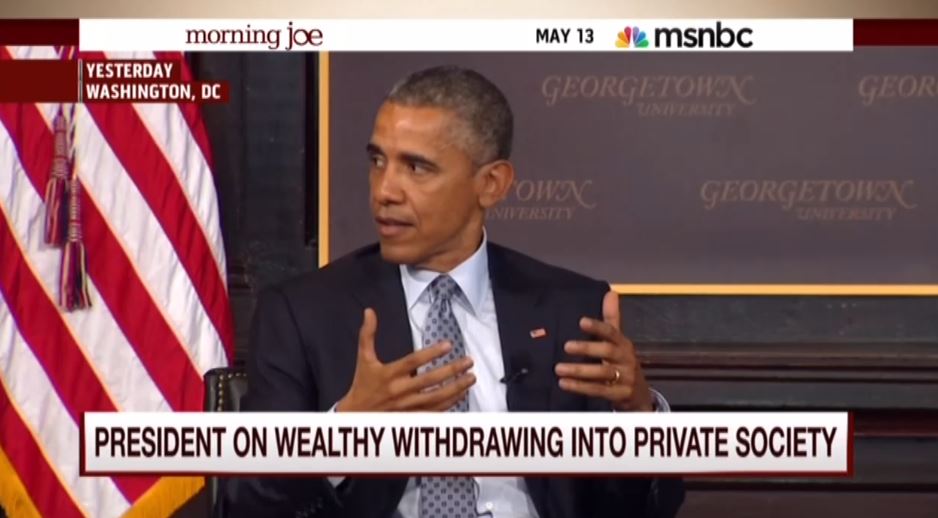 JOE SCARBOROUGH: I am sure you will be asked this question many times in your next press briefing, but the President was critical of people who went to private schools and sent their children to private schools and plays at private clubs and, well, every alarm should be going off. Do you have that clip? Let's play that clip first.

BARACK OBAMA: Those who are doing better and better, more skilled, more educated, luckier, having greater advantages, are withdrawing from, sort of, the commons. Kids start going to private schools. Kids start working out at private clubs instead of the public parks. An anti-government ideology then disinvests from those common goods and those things that draw us together and that, in part, contributes to the fact that there is less opportunity for our kids.

SCARBOROUGH: Josh, obviously, the man who said that went to the best prep school in Hawaii and went to the best private colleges in the United States. His children who, I don't think it's anybody's business where they send their children, but if the President is going to criticize people who send their children to private schools, he has to recognize, obviously, that he sends his children to the best schools in Washington, possibly America. How does he, is this a self critique against himself, mistakes he's made? What was the President trying to get at there?

EARNEST: Joe, the pointed the president was making is it's important for us to recognize that as a country, we all have an interest in investing in the common benefits that our country has to offer.

EARNEST: His point is that even if you send your kids to private school, we all have an interest in making sure we have good high quality public schools available to everybody. It's not that far from the White House that we do have some of the best public schools in the country over in Fairfax county, Virginia. That is an example. That is also a more wealthy than average county in the country. And that is an example of a society of a community that has invested in a common good for the benefit of their community and that's the kind of thing that we need to see all across the country. Whether that is something as simple as investing in our national parks and investing in our local parks or investing in our public schools or making sure that every single American has access to quality health insurance.

SCARBOROUGH: So did the President consider sending his children to public schools? Again, none of my business unless he is criticizing Americans who send their children to private schools.

EARNEST: Again, I don't think that he's criticizing people for sending their children to private schools. He's suggesting that all Americans need to keep in mind that it's in our collective interest as a country and as individual citizens for us to invest in the common good, for us to invest and make sure we have good quality public schools available for everybody. So that everybody has a fair shot. Everybody has a fair shake. Everybody has an equal opportunity to succeed and will let their ambition and hard work take them as far as it will carry them.