Liberal MSNBC anchor Lawrence O'Donnell on Tuesday decried the use of the word "thug" as "racist" and assailed those in the media who use the term. Yet, O'Donnell himself has repeatedly uttered the word. After playing a montage of CNN and Fox News journalists saying "thug," O'Donnell sneered, "What would be the first word of choice for a virulent racist to use on your show about those people and know for certain that he or she could get away with using that word? It would be thug."

The host demanded, "We don't need that word. We don't need it... So the good news is, we can just drop it, just like that." Yet, O'Donnell hasn't "dropped" the allegedly inflammatory word. On January 14, 2013, speaking of Scott Brown's 2012 senatorial campaign, the cable personality mocked the Republican "who ran a Senate campaign that was worthy of the thugs in my Boston neighborhood a generation ago."

On March 31, 2014, O'Donnell was discussing Chris Christie and Bridgegate. The host referred to a "thug e-mail" from some in the governor's administration.  On July 23, 2013, discussing hoodies and Bill O'Reilly, O'Donnell raged: 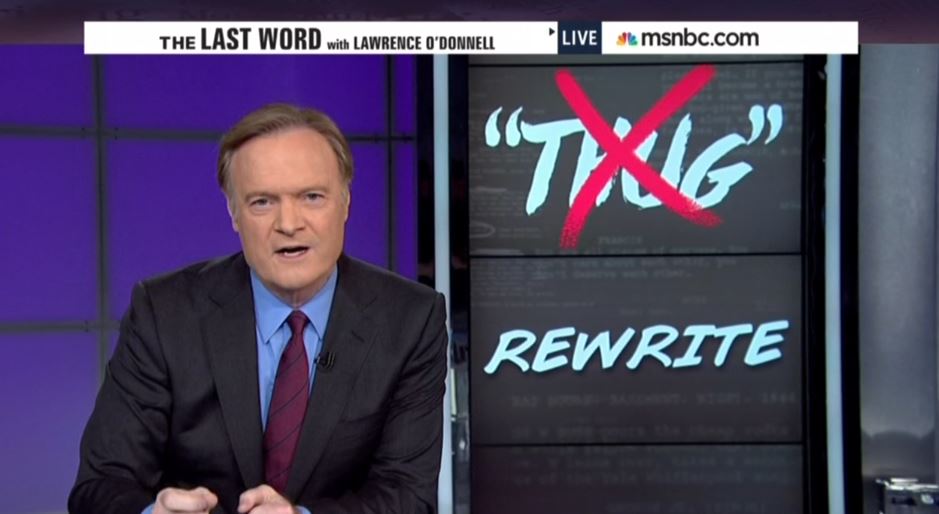 LAWRENCE O'DONNELL: How many times does O`Reilly have to see Mark Zuckerberg in a hoodie to realize that the hoodie has become a completely culturally, economically neutral article of clothing that tells you virtually nothing about the wearer? Except possibly where the wearer went to school. But any thug can get his hands on a hoodie with any school name on it.

Any thug can get his hands on a hoodie? So, is the word racist or not? If so, what to make of O'Donnell's affinity for thug?

A partial transcript of the May 5 segment is below:

LAWRENCE O'DONNELL: And in the rewrite tonight, what I hope is the last word about thugs.

MAYOR STEPHANIE RAWLINGS-BLAKE: I'm a life-long resident of Baltimore and too many people have spent generations building up this city for it to be destroyed by thugs who, in a very senseless way, are trying to tear down what so many have fought for.

BARACK OBAMA: A handful of protesters, a handful of criminals and thugs who tore up the place.

LAWRENCE O'DONNELL: Is a point of cultural embarrassment for me to watch the great, white fight for the right to use the word thug being led by Irish Americans at their cable news desks. Erin Burnett, Bill O'reiley, Megyn Kelly.

MEGYN KELLY: I'm thinking thugs is not far off the mark.

O'DONNELL: Who appointed the Irish the judges of which words are racist? How did that happen? To my colleagues in the television news business, I beg you, beg you when you're getting ready to use the word thug on national television, ask yourself what the word thug adds to the discussion.

O'DONNELL: Howie, you could have just said rioters. Now, I know Howie Kurtz. I know he didn't mean anything racial by the use of the word thug. But millions of African-Americans don't know him and many of them might suspect that he just might mean something racist. So, again, to my colleagues in television news, please, please just stop and think about this. For just a minute. I ask a minute of your thought time. Please ask yourself what word would a white racist use today on television, on your show, to describe those people we saw throwing stones at police last week and looting a CVS. What would be the first word of choice for a virulent racist to use on your show about those people and know for certain that he or she could get away with using that word?

How many? And here is what's so very nutty about this whole thing. You don't need to use that word that create that suspicion, the word that so many people on television seem so eager to use. We don't need that word. We don't need it. There is absolutely nothing that needs to be said about what has happened in Baltimore that demands the use of the word thug. Nothing. So the good news is, we can just drop it, just like that. That's how easy it is to fix this problem of possible misunderstanding. We can just drop the word thug. We know how to do that. It's not hard. We now how to stop using words in certain ways or stop using them completely. Forever. That is why no one is calling anyone who broke the law in Baltimore a negro or a ruffian. If you continue to fight for the right to use the word thug on television, the one thing we can be sure of is it's not because we're trying to add to our understanding of the story.