Two days after Christians celebrated Easter, NBC trotted out the claim that the tomb and burial site of Christ has been found. The segment only included one brief clip of a skeptic. Instead, journalist Katy Tur, reporting live from Jerusalem, excitedly explained, "...A journalist and a geologist said they have new evidence that this right here, underneath this concrete slab is Jesus's tomb."

She insisted it "could be the biggest discovery in the history of archaeology." Tur allowed that the contention of a dead and buried Christ "is going to be really controversial." She added, "If Jesus's body was buried here and his bones were found here, it could step on a lot of religious toes."

Tur repeatedly interviewed Simcha Jacobovici. The journalist, who is not a scientist, said of his claims: "Faith only comes into it if you want to believe that it's not [Jesus's tomb]." 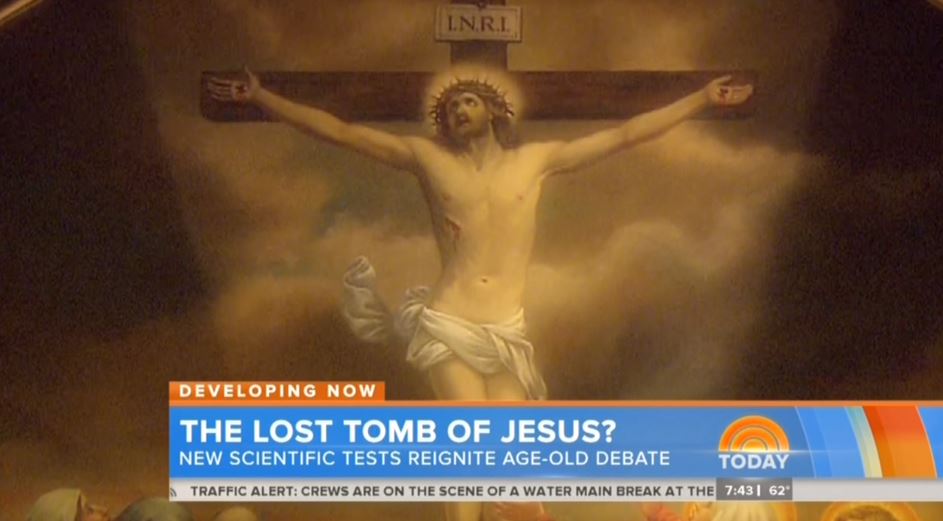 It wasn't until the end of Tuesday's segment that Tur featured professor Nicola Denzey Lewis dismissed the claims: "This does not prove it was the tomb of Jesus of Nazareth who is at the center of Christian belief."

The networks have a long history of hyping these sorts of theories. In 2014, ABC's Good Morning America touted the "explosive" claim that Jesus was married. The GMA journalists promoted the "shocking new claims," but only noted at the end of the segment that, as a Duke professor put it, there isn't "any credibility in these claims at all."

If these new assertions are debunked, will NBC journalists offer them prominent attention on their network?

A transcript of the April 7 segment is below: 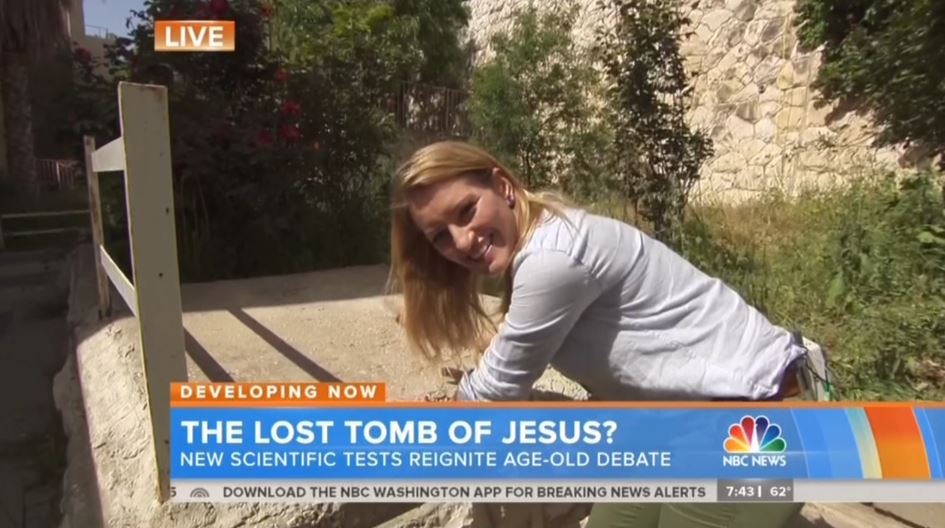 MATT LAUER: We are back with a long running debate. That could be an under statement. It is generating new interest this morning. It's over a tomb that some say could have been the burial spot for Jesus and his family. NBC's Katy Tur is in east Jerusalem. Katy, people will be talking about this. Good morning.

KATY TUR: They will certainly be talking about this, Matt. I want to show you where I am exactly right now. I'm between two nondescript apartment blocks in East Jerusalem, walking along a nondescript path you could walk along a million times and never think twice about. Except, a journalist and a geologist said they have new evidence that this right here, underneath this concrete slab is Jesus's tomb. It could be the biggest discovery in the history of archaeology, but believing it takes a lot of faith.

SIMCHA JACOBOVICI (Israeli filmmaker): So, this is the famous tomb.

JACOBOVICI: This slab of cement.

TUR: This. It all centers on what or who was inside this ancient box of human remains containing bone fragments was an intriguing inscription: "James, son of Joseph, brother of Jesus." Are you positive this is the family tomb of Jesus?

JACOBOVICI: No question in my mind that all the evidence, archaeological and statistical and now chemical tells the same story. This is the tomb of Jesus of Nazareth and his family.

TUR: Geologist Dr. Aryeh Shimron claims that box, called a ossuary is a chemical match to soil in a long lost tomb in east Jerusalem that houses other ossuaries with similar descriptions that make history hunters pulses race.

ARYEH SHIMRON: The evidence virtually could not be stronger, more powerful than what I have.

TUR: Those boxes are inscribed with the name Joseph, Mary, and Jesus, what some call Jesus's family tomb. That tomb, rediscovered in 1980, was the subject of a controversial 2007 documentary produced by Titanic director James Cameron. Based on  inscriptions on the boxes inside, the film claimed Jesus was married to Mary Magdalen and had a son named Judah –

JACOBOVICI: This is it.

TUR: – something strongly disputed by archeologists and Christian scholars alike.

NICOLA DENZEY LEWIS (Brown University): This does not prove it was the tomb of Jesus of Nazareth who is at the center of Christian belief. It may prove that somebody named Jesus was buried in this tomb and that this person and had a father who was named Joseph. That's really all that we know.

TUR: Skeptics say the names inscribed on the boxes were all very common at the time and the authenticity of the James ossuary itself and it's inscription has long been disputed. But supporters, excited over the new research, say linking the James ossuary to the possible family tomb of Jesus would be another testament to its importance. No faith required. You believe it – you know it's true.

JACOBOVICI: Faith only comes into it if you want to believe that it's not.

TUR: And it is going to be really controversial. Now, if Jesus's body was buried here and his bones were found here, it could step on a lot of religious toes. Remember, two billion people believe in Christianity, guys.  But if it does proves to be true and that's a big if, just imagine, this right here, this nondescript area could be one of the most historical places in all the world.

SAVANNAH GUTHRIE: We are all marveling at you standing there, even if there's a question about it, Katie. Anybody could just come over there.

LAUER: And I thought that last comment – Faith only comes into play, according to that gentlemen, if you want to believe that it's not.

GUTHRIE: He feels that he has the science. Raises a lot of questions, I guess archaeologically and theologically as well. People will wonder about that.