In a fairer world, the increasing number of lies and exaggerations arising from the Brian Williams scandal would be perfect fodder for Jon Stewart. However, it wasn't until Monday night that the liberal Daily Show anchor finally broke his silence and covered Williams and his fabricated story about being struck by an RPG during the Iraq War. Predictably, Stewart neglected mockery aimed at the NBC journalist and turned it towards a Republican target, the Bush administration.

After playing a media montage of stories about Williams, the Comedy Central host assailed, "Finally, someone is being held to account for misleading America about the Iraq War." Rather than extract humor from the current situation, Stewart went back to the past: "Never again will Brian Williams mislead this great nation about being shot at in a war we probably wouldn't have ended up in if the media it had applied this level of scrutiny to the actual [bleeped] war."

Suddenly, Stewart had completely shifted away from Williams and to the Bush administration, complaining, "The run-up to the Iraq War was kind of beautiful in the evil efficiency of its media manipulation."

The only Williams mocking came, briefly, at the beginning of the show. Stewart quickly joked: 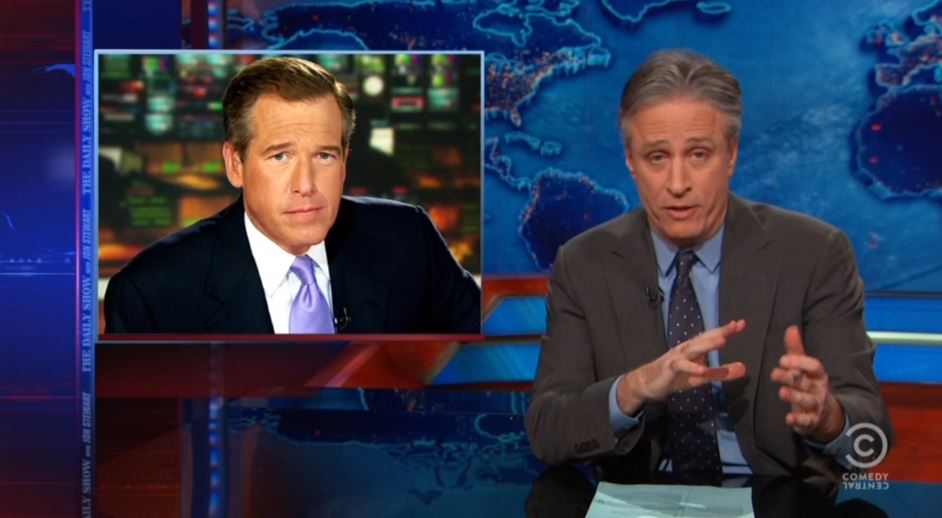 JON STEWART: Bri, why? Why, Bri? Why Bri lie? Sigh. Were you Bri high? 'Cause if they keep finding stuff, Bri bye...We got us a case here of infotainment confusion syndrome. It occurs when the celebrity cortex gets its wires crossed with the medulla anchordala.

On CNN, Monday, Brian Stelter and Brooke Baldwin appeared perplexed as to why Stewart was downplaying the Williams story: "You would think it would be a big story on the Daily Show...These are two...guys [Stewart and Williams] from new Jersey. I think they're buddies." 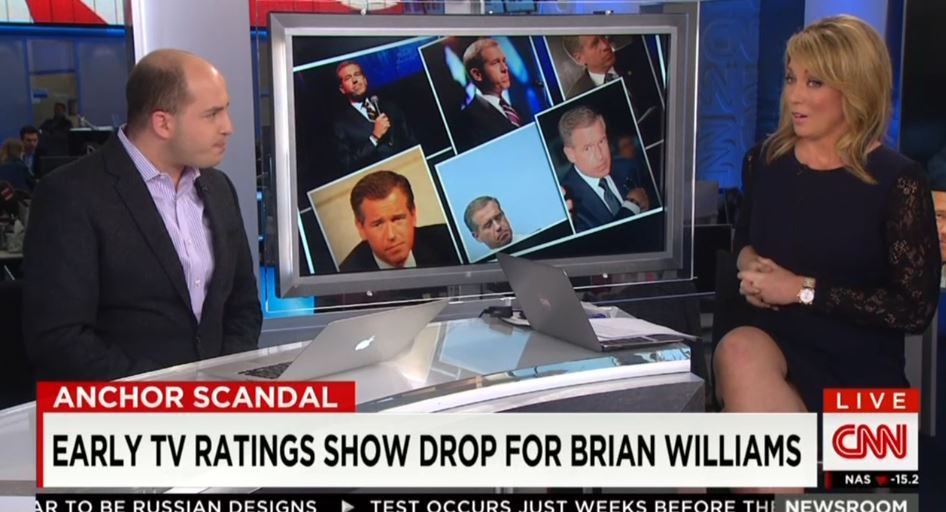 Stelter speculated, "Well, Brian Williams has been on with Jon Stewart at least a dozen times so there's definitely a relationship there." He added that the absence of coverage "raised my eyebrow."

The idea that Stewart didn't want to attack a fellow liberal wasn't mentioned.

There's certainly a treasure trove of jokes, if lefty comics are willing to address the issue. A newly found video finds that, in 2003, Williams referred to his fabricated incident as "like Black Hawk Down meets Saving Private Ryan."

A partial transcript of the February 9 segment, which aired at 11:01pm ET, is below: 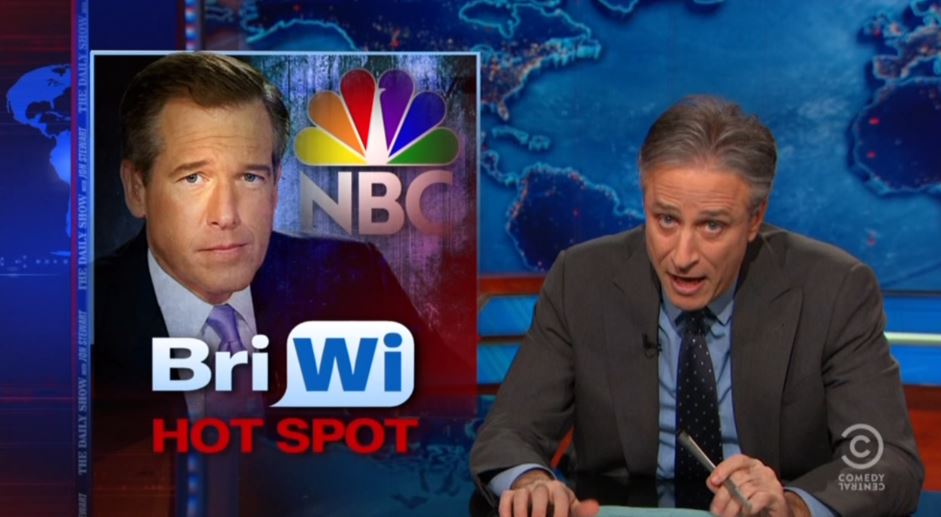 JON STEWART: Bri, why? Why, Bri? Why Bri lie? Sigh. Were you Bri high? 'Cause if they keep finding stuff, Bri bye...We got us a case here of infotainment confusion syndrome. It occurs when the celebrity cortex gets its wires crossed with the medulla anchordala.

STEWART: The media is on it! Now this may seem like overkill but for me, no, it's not overkill because I'm happy. Finally, someone is being held to account for misleading America about the Iraq War. Finally. Now-- it might not necessarily-- it might not necessarily be the first person you would want held accountable on that list. But never again will Brian Williams mislead this great nation about being shot at in a war we probably wouldn't have ended up in if the media it had applied this level of scrutiny to the actual [bleep] war. In fact, why is the media so up in arms?

HOWARD KURTZ: This is a huge credibility crisis.

BRIAN STELTER: Credibility and trust are what we go off of, what, we stand for.

DAVID ZURAWIK (Baltimore Sun): If they care about credibility-- he should no longer be managing editor and anchor.

UNIDENTIFIED: I'm stunned that are you not asking for him to be fired, Megan.

Someone as -- Absolutely. Someone as credible as you, who while very attractive and articulate at the core, are you credible. You are like Walter Cronkite kind of credible.

STEWART: But, like, way hotter than Cronkite, like way hotter. "Like, you're like, you're like super credible. Oh my God, did I say that out loud. Do you want to go out to dinner? You super credible. Oh my God. This is super embarrassing." The media is right to go after Williams like this. Imagine if you let lies slip into news stories like a huge pile of them was disseminated in, say, the New York Times and Meet the Press and sometimes in the New York Times just so that the administration could then go on Meet the Press and say this.

DICK CHENEY: There's a story in the New York Times this morning that, in fact, he had been seeking to acquire the kinds of tubes that are necessary to build a centrifuge and the centrifuge is required to take low grade uranium and enhance it, which is what you have to have in order to build a bomb.

STEWART: The crazy thing is the Bush administration are the ones who planted the [bleep] Story in the New York Times in the first place. The run-up to the Iraq war was kind of beautiful in the evil efficiency of its media manipulation. It's like the Bush administration hired Temple Grandin to design a machine that kills the truth. So I love that now the media pretends that they must-- the crown jewel of their credibility when we already have seen it's Al Capone vault. Not that they weren't hard on themselves post-cluster [bleep].

STEWART: But maybe this incident will cause reflection on your part. Will you go back now and look at other instances of media malfeasance that lead our country to the most catastrophic foreign policy decision in decades.