Ed Schultz, Who Flipped on Keystone, Slams Dems for Being 'Bought’

A furious Ed Schultz on Thursday raged over the fact that only 36 Senate Democrats opposed the Keystone pipeline in a vote. Nine defections contributed to the bill passing the Senate. Schultz sneered, “But what a sad moment for Democrats if they're concerned about climate change…The Democrats can be bought.”

Senators Bob Casey (Pennsylvania), Thomas Carper (Delaware) and Michael Bennet (Colorado) reversed themselves on past opposition and voted yes. The cable host isn’t really in a position to judge Democrats for changing their position on Keystone due to pressure, considering he did exactly the same thing.

Bashing Democrats as sell outs, the host lamented, “It’s a sad say for the progressive movement in this country. So, now I guess [Democrats] can all say…’We don’t have to worry about the liberals shouting at us about Keystone.’”

On February 5, 2014, Schultz stood up for Keystone, lecturing viewers, "...The hard cold truth is the United States is an oil and gas dependent country and we're going to be for the foreseeable future."

On his February 7, 2014 radio show, Schultz was the receiving end of liberal "shouting":

SCHULTZ: There's one thing I've learned this week is that liberals can be just as mean as conservatives. I hate to say that, I hate to report that, but it is just I find it absolutely amazing, the all-or-nothing crowd is out and about for my head because of the pipeline story.

On Thursday, with no irony, Schultz lectured Democratic flip-floppers: “Don't tell Americans you have a spine and you're going to stick up for them. Show us.”

A partial transcript of the January 29 segment is below: 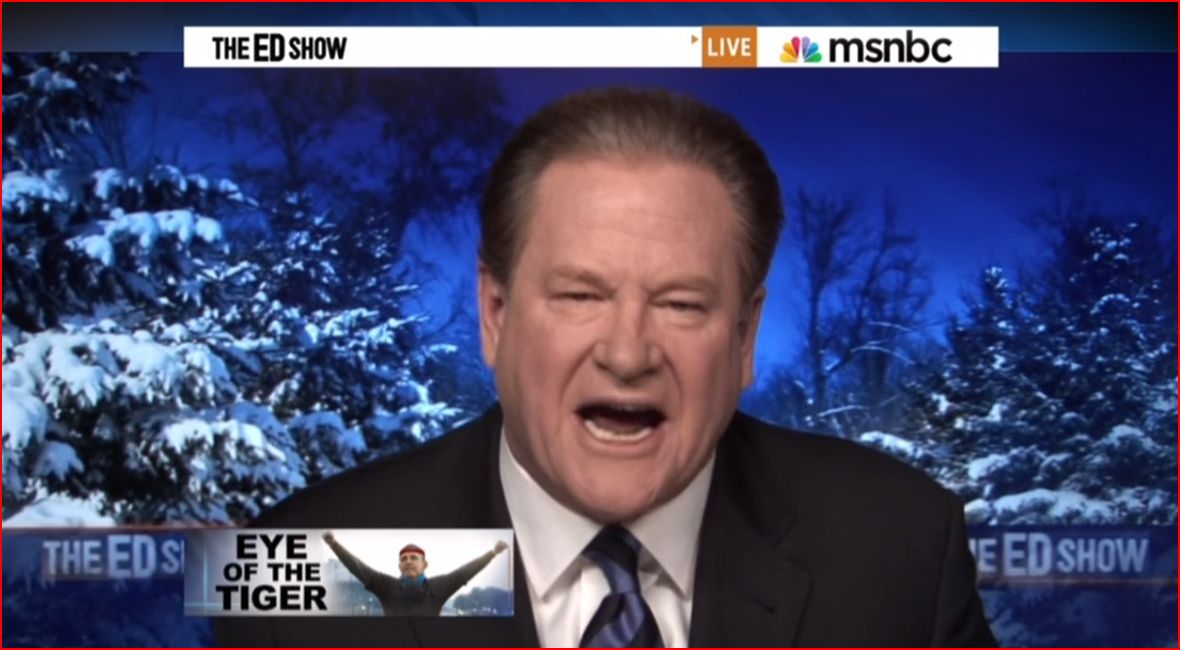 ED SCHULTZ:  Just moments ago, the United States Senate voted 62-36. This was the scene in the United States Senate. Only 36 Democrats voted no on the Keystone XL Pipeline. So, Mitch McConnell and the Republicans, they got what they wanted in the Senate. They got a yes vote. But what a sad moment for Democrats if they're concerned about climate change. To me, there is no amendment that is worthy of a Democratic vote. There is no amendment out there that could be placed on the table if the Democrats are serious about climate change. So, I interpret this vote as, number one, the Democrats can be bought. Number two, the Democrats are seriously not serious about climate change. They're only lukewarm. Lukewarm. So in other words, they're not jumping in the lake. They only got their toe in there. This is not good. Now, when you look at Keystone, what amendment out there is worthy of bringing the dirtiest oil on the face of the Earth to market that will not enhance your pocketbook at all? But it will enhance the pocketbooks of the Koch brothers. The very people who are funding Citizens United and working blind that law to make sure they take down the progressive movement in the country. So we have 36 Democrats who can't be bought, and we have some Democrats who say, well, you know, the pipeline is going to get built anyway.

SCHULTZ: Don't tell Americans you have a spine and you're going to stick up for them. Show us. It's very simple. Take a page out of their play book. People are politically exhausted on the left right now and they're all scattering and they're really not sure what to think because nobody is saying it. “This is human nature. If you’re not willing to fight for me, how in the hell do you expect me to line up and fight with you?