At Obama Press Conference, No Questions on Skipping Anti-Terror Rally

Barack Obama on Friday conducted an almost hour-long news conference with journalists, but faced no questions on his administration's much-maligned decision not to send a representative to last Sunday's massive anti-terror rally in France. ABC journalist Jon Karl wondered if the President had any thoughts on Mitt Romney possibly running for president again.

After a nearly 20 minute preamble, Obama and British Prime Minister David Cameron finally got to reporters. After offering up a tough question, Karl lobbed this softball: "If I may, Mr. President, I really like would hear your reaction to the news that Mitt Romney is thinking about running for president again." Obama brushed that aside with a simple retort: "...I have no comment."

In total, there were only four questions at the White House event, not counting brief follow-ups. Although the terror attack in France was mentioned, journalists never quizzed the President on the lack of a high profile official. 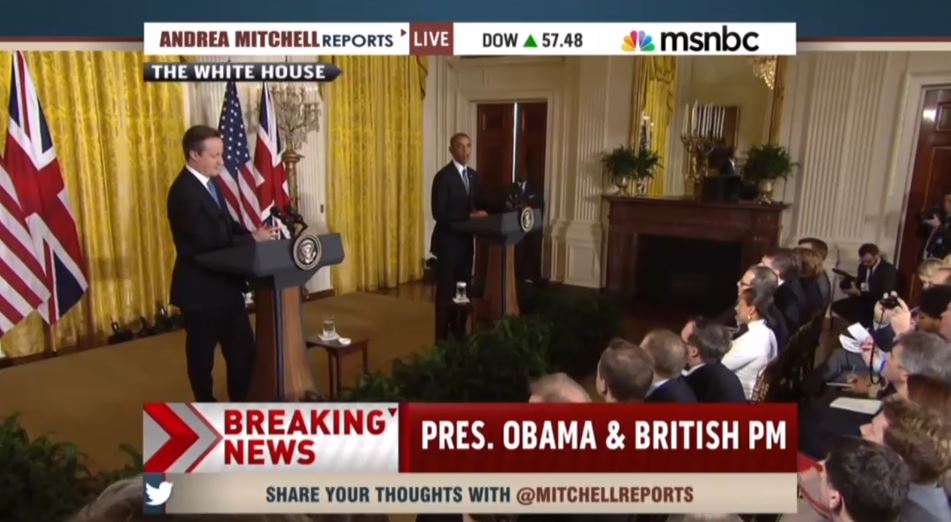 On Tuesday, Karl appeared on Good Morning America and hyped the administration's backpedaling as "a remarkably quick turnaround for a White House that rarely admits mistakes."  George Stephanopoulos trumpeted it as an "unusually rapid concession." On that day's Today, NBC allowed ten seconds on the reversal (out of a four hour program).

CBS's Major Garrett on Friday asked the two leaders, "Do you believe Europe is at a turning point now in its recognition of what its threats are [regarding terrorism]?"

In recent days, the President has been criticized for not using the phrase Islamic extremism. By contrast, Cameron argued, "Well, first of all, look, we do face a very serious Islamist extremist terrorist threat in Europe and America and across the world."

All three cable networks carried the news conference, but of the networks, only NBC bothered to air it.

A transcript of the January 16 questions:

JON KARL: You mentioned your opposition to the sanctions bill on Iran. And this is obviously a bipartisan bill supported by some very senior members of your own party in Congress. Why do oppose a bill that would only impose sanctions if you fail to reach an agreement and if the Iranians fail to agree to take steps to curtail their nuclear program? Would you go so far as to veto a bill supported by top Democrats in Congress on this issue? And to Mr. Prime minister, I understand you've been making phone calls to senators on this issue of the Iran sanctions bill. Is that correct? Are you actually lobbying the U.S. Congress on this? If I may, Mr. President, I really like would hear your reaction to the news that Mitt Romney is thinking about running for president again.

BARACK OBAMA: On your last question, I have no comment. 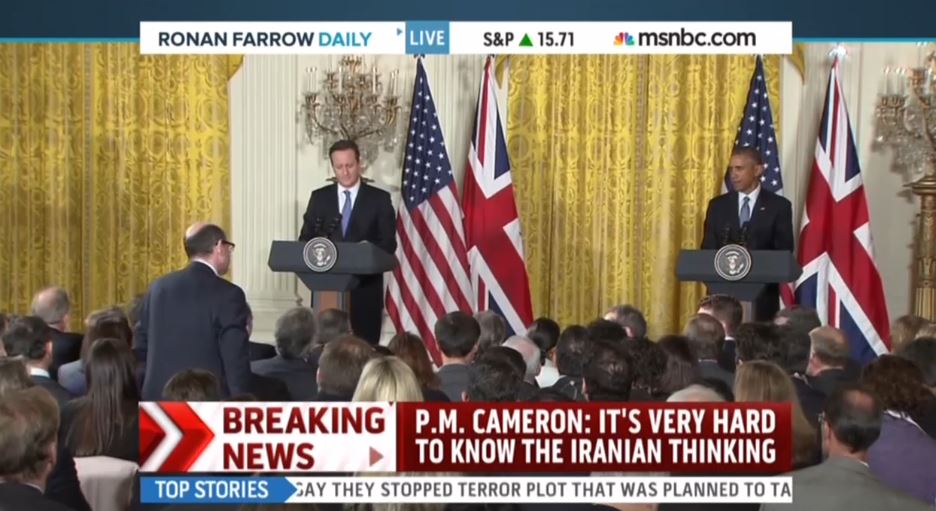 NICK ROBINSON (BBC): Nick Robinson, BBC News. Prime minister, with extra security being put in place today for the Jewish community and also for police officers, would people be right to conclude that the threat of an attack on the streets of Britain is all but imminent? And Mr. President, you've spoken of the threat posed by fighters coming back from Syria, do you ever worry that this is a legacy of the decision of the United States and United Kingdom to in effect stand on the sidelines during Syria's bloody civil war? And if I may briefly, if you'll forgive me on the economy, you said you agree, is he right? Is it time to stick to the plan?

DAVID CAMERON: Well, first of all, look, we do face a very serious Islamist extremist terrorist threat in Europe and America and across the world.

MAJOR GARRETT: Questions for both of you, I want to make sure we heard what you were trying to say. You were clearly directing a message to Congress in the context of Iranian negotiations. Were you also sending a message, both of you, to Iran, that if the sanctions talks fail that war footing is the most likely alternative for this country and those who are allied with us in this common pursuit? And atrocities in Paris, and raids and threats either in Netherlands and Belgium, I'd like to ask you both, do you believe Europe is at a turning point now in its recognition of what its threats are and only mobilization in terms of new law and security footing, larger budgets? You both talked about cyber security. There is a crucial issue for both countries. Back door is an encryption to protect people and also privacy. I would like your comments on that. Thank you.

ROBERT MOORE (ITV News): Prime Minister, it's clear there's a, sort of, security alert under way at the moment around the Jewish community in Britain. Can I just be clear? Is that based on specific intelligence? Should people be concerned about doing their daily activities this weekend? And do you regard a terrorist attack on British soil as almost inevitable? Mr. President, you say there's dialogue under way with the big, American tech companies but you share the Prime Minister's view that the current threat environment is so severe that there does need to be a swing of pendulum a little bit, maybe from privacy towards counter-terrorism and that this area of private encrypted communications is a very dangerous one potentially in terms of facilitating dialogue between terrorist groups?