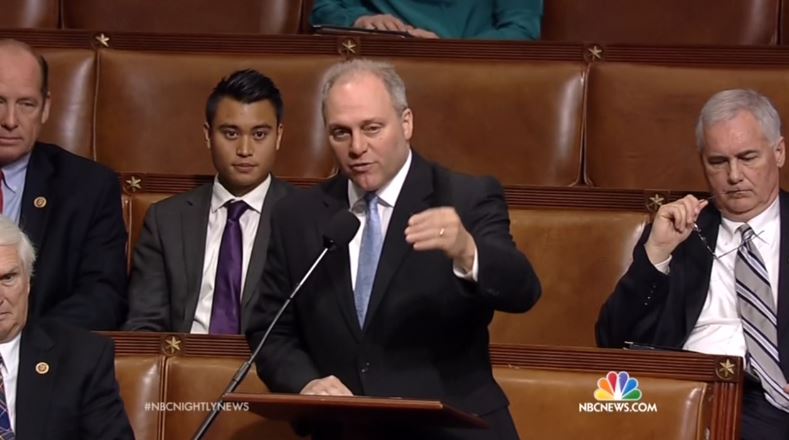 The liberal New York Times and the Washington Post went into hyperdrive, Wednesday, devoting a combined 3800 words and three front page stories to a scandal involving Republican Congressman Steve Scalise. Both newspapers worked from the same talking points, insisting that Scalise's 12-year-old speech to a racist organization could derail the GOP's attempts to take back the White House.

The front page of the Times warned, "Republicans Try to Fix Damage Scalise’s 2002 Speech Could Do in 2016." The Post, in a story by Ed O'Keefe and Robert Costa, echoed, "But others worried about the potential political fallout from a fresh racial controversy for a party eager to show its broadening appeal to minorities ahead of the 2016 presidential election."

If one includes the O'Keefe/Costa article (which also discussed Michael Grimm's resignation from Congress), the Post and Times devoted 3837 words to dissecting the Scalise story. (On Tuesday, the Post offered 1621 words, the Times 641.)

The two writers set up the template for blowing up the story into a scandal that engulfs the entire GOP:

The twin controversies could also derail the carefully laid plans of Boehner and the incoming Senate majority leader, Mitch McConnell (R-Ky.), to shape the party’s message and Washington’s political agenda in the coming weeks.

In a separate piece, Costa and Philip Rucker warned that Scalise has a "hard-right streak and chaired the conservative Republican Study Committee."

In the Times, Jonathan Martin and Jackie Calmes lectured:

The controversy erupted as Republicans were making a renewed effort to reach out to black voters. It threatened to cloud their agenda after capturing control of the Senate and adding to their House majority in last month’s election. Republicans anticipated using their new power to focus on economic growth and potentially find areas of common ground with President Obama, both elements of a broader push to demonstrate that the party can govern at a time when lawmaking in Washington has all but come to a halt.

It wasn't until paragraph 13 of the 1196 word story that the journalists noted that "Mr. Scalise’s Republican colleagues said they could not recall him ever using racially suggestive language in private and did not think he harbored racist views."

Unlike the Times, however, the O'Keefe and Costa story at least highlighted Democratic hypocrisy when it comes to race:

Other Republicans said Scalise’s troubles were a media-driven affair.

“This is an absurdity,” former House speaker Newt Gingrich said in an e-mail. “Twelve years ago Scalise made a mistake in judgment while giving speeches on the state budget. Among Democrats there was a dispensation for Justice Hugo Black, who was an active Klan member, and for [former West Virginia senator Robert C.] Byrd, who once led his local Klan group.”

The USA Today print edition offered just 207 words to Scalise and didn't get to the story until page A-2. In an extended, online-only version, writer Catalina Camia hinted, "The revelation that Scalise spoke to a hate group comes as the GOP prepares to take control of both chambers in Congress and as Republicans try to make strides with minority voters."