CBS Wishes Viewers a 'Merry Marijuana' and a 'Happy Cannabis!'

Someone at CBS News is obsessed with pot. This Morning on Wednesday again touted the wonder of legalized marijuana in Colorado. Now, there is a holiday theme. Co-host Jeff Glor enthused, "...Shoppers are already hearing about Green Friday bargains. The green is for marijuana." A CBS graphic promoted, "Merry Marijuana: Pot Merchants Cash in on Christmas Cannabis."

Bojorquez continued, "And Denver's Medicine Man store is advertising its own version of a door buster with this Green Friday promotion."  Seeing only upside, the journalist raved, "...Marijuana has become a legitimate industry, generating more than 50 million dollars in taxes and fees for the state so far this year." 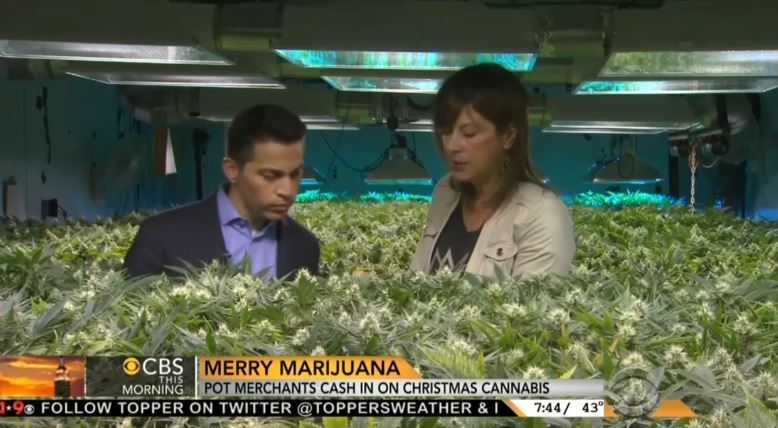 It wasn't until the very end of the segment that Bojorquez noted there will be no TV or billboard ads for Green Friday He explained that "there are strict regulations to ensure that marijuana is not being marketed to those under 21."

Why would they need marketing? CBS is doing that for the industry.

Left out of the story was any of Colorado's problems since legalization. For instance, Jack Healy in the New York Times on October 29 looked at the dangers of "edible" pot: "But a spate of accidental ingestions by children and adults, and two deaths tied to edibles this year, have prompted widespread calls to clamp down on the edible corner of the marijuana market." 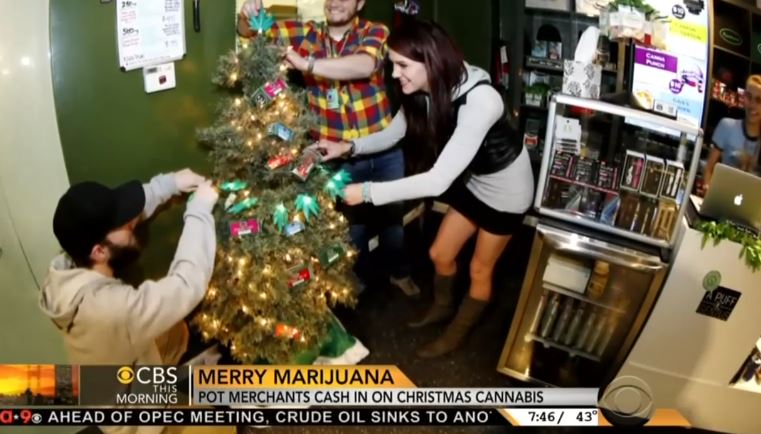 (In April, CBS did cover the dangers facing the state. An angle that was ignored on Wednesday.)
In October, the network pushed the marijuana "miracle" in the state.

In April, CBS This Morning promoted legalized in pot in Colorado and touted the state's best: "ghost train haze."

In January, the program touted "cannabis capitalism" and "pot tours."

A transcript of the November 26 segment is below:

JEFF GLOR: Plus, Colorado's pot shops have big expectations for black Friday. We'll show you some of their bargains for holiday shoppers if you don't need that extra sweater. That story's ahead.

GLOR: Black Friday is less than 48 hours away. But in Colorado this morning, shoppers are already hearing about green Friday bargains. The green is for marijuana. Manuel Bojorquez is in Denver where the pot industry wants a piece of the holiday shopping rush. Manuel, good morning.

MANUEL BOJORQUEZ: Good morning. Sales of recreational marijuana have been legal here in Colorado for almost a year now. In that time, it's become a competitive industry and the holidays are no different. At the Dixie Elixir Marijuana Company here in Denver, workers are busy preparing a special holiday edible.

KEBER: This is a seasonal white chocolate peppermint square, if you will.

BOJORQUEZ: Dixie Elixirs is just one of the marijuana businesses throughout the state turning to familiar holiday marketing strategies. One dispensary is selling pot in the shape of mini Christmas trees. And Denver's Medicine Man store is advertising its own version of a door buster with this green Friday promotion. Sally Vander Veer is one of the store's managers.

SALLY VANDER VEER (Medicine Man store manager): Those prices represent more than a 50 percent discount off of everyday prices for top shelf marijuana. We can offer green Friday sales for our customers just as they would at Macy's or any other big box stores.

BOJORQUEZ: Are people going to really turn out to get marijuana at that discount?

VANDER VEER: I think so. This is a deep discount purchase for marijuana.

BOJORQUEZ: She hopes those deep discounts will lead to a bump in holiday sales.

VANDER VEER: I think with the prices that we have in place that we'll have a line out the door.

BOJORQUEZ: Once known as Colorado's experiment, marijuana has become a legitimate industry, generating more than 50 million dollars in taxes and fees for the state so far this year.

SAM KAMIN (University of Denver law professor) : It started, really, with a wink and a nod.

KAMIN: I think what we're seeing now is an industry maturing. That it's gone from being a novelty to behaving like other industries, which is, you know, doing promotions, doing advertising. Trying to come up with new products. Trying to capture a market share and, you know, I think we'll see a lot more of that going forward.

BOJORQUEZ: But people in Colorado will not see green Friday ads on TV, on billboards, or even many publications. That's because there are strict regulations to ensure that marijuana is not being marketed to those under 21. Gayle?

KING: Okay. Got it, Manuel. So, marijuana shaped like Christmas trees? Is that a good stocking stuffer? Anybody? Deep discount on marijuana? I don't know.